Some novel factors behind child marriage 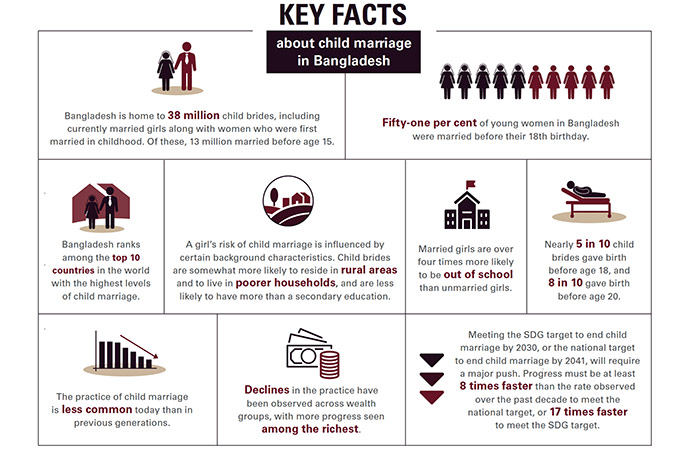 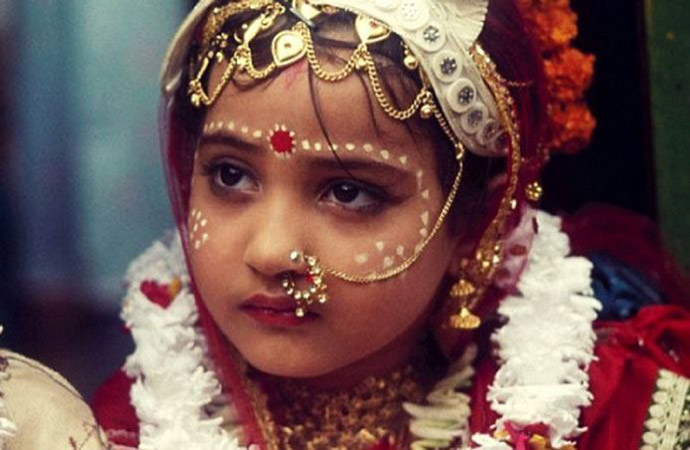 Despite regular global publicity and the presence of strict acts in countries against early marriage, the field-level scenario has not changed much since frequent stories of secretly arranged marriage get global population puzzled regarding the secret reasons behind the child marriage.

The very common reason comes to every mind behind child marriage is poverty but does that really represent the real new secrecy of it? Law enforcers, local representatives, development workers, journalists and parents have new points to be noted with concern.

The UN organization also reveals that 12 million girls are married off in their childhood ever year globally. In the world, South Asia alone is home to the 40 percent of the global burden (285mn or 44%) of child bribes. Sub-Saharan Africa stands at second position with (115mn or 18%) of child brides.

When the topic comes to the fore, we think of poor countries first, but child marriage occurs in developed countries with high-income as well. The unicef shows that the majority of all 50 States in the USA have an exception in law that allows children to marry before the age of 18. Meanwhile, in the European Union, only four countries tolerate no exceptions to the minimum age of 18 for marriage as of 2017.

Countries across the globe committed to end early marriage by 2030 though the Sustainable Development Goals (SDGs). Earlier in 2015, UN Member States initiated to adopt the SDGs: a set of 17 goals set out global development priorities between now and 2030. According to the SDGs target 5.3, governments pledged to "eliminate all harmful practices, such as child, early and forced marriage and female genital mutilations" by 2030.

The government, INGOs, local NGOs, local representatives and many more have been working relentlessly with a noble intention to stop child marriage, but the change looks taking place very slow seemingly to be late achievement by the targeted year.

Bangladesh introduced an Act called "Child Marriage Restraint Act, 2017" and strongly taking various steps to end child marriage. Child Marriage Prevention Committees have been formed centrally and in root level of the country's administrative area. Government officials and local government have been empowered to take immediate actions against child marriage under the Act. There are punishments for contracting child marriage while the honorable Prime Minister Sheikh Hasina has pledged to end marriage under the age of 15 by 2021 and for those under the age of 18 by 2041.

Despite all these positive steps and actions, Bangladesh has witnessed a 13% increase in child marriage during COVID-19 pandemic in 2020 which is the highest rate of child marriage in the country in the last 25 years. Bangladesh-based international NGO Brac revealed the information and said the coronavirus has massively affected societies and economies, pushing many into extreme poverty.

According to a survey conducted by Manusher Jonno Foundation (MFJ), a total of 13,886 child marriages took place in 84 upazilas of 21 districts in Bangladesh during seven months of the ongoing pandemic in 2020.

Today, the most common reason comes to every mind for child marriage seemed to be poverty in Bangladesh but does that really represent the secrecy behind it? Does that represent the secret stories of child marriage arrangements taking place in Bangladesh? Members of local administrations, law enforcers, local representatives, development workers, and journalists have other points to be noted with concern.

Sonia Akhter, 16, pseudo name, a tenth-grader girl updated her marital status on her Facebook profile as 'married' during COVID-19 pandemic. The abrupt change of a bright girl's marital status made her teacher stunned. Sonia chose her house tutor as husband in Gopalganj as a free girl and updated her marital status on social media. Her solvent parents were not happy but did take no strong steps against their new son-in-law to avoid social issues and a notion of security of their daughter's future. Girls' psycho-social change is vivid in the society which is well-accepted too.

Sometime it's not about the girl child's matter, but the negative and ill attitude of newly rich people mostly people returned home with huge foreign currency. They desire of marrying a very young girl (Kochi Meye reads in Bengali) seemed to be very unusual but has become a common phenomenon. Their wealth and foreign currency allure the parents to marry off underaged children in search of socio-economical security. Girl children fall prey to such elements in the society frequently.

The nation has achieved tremendous success in educational inclusion of girl children. However, the new challenge arises for girl children on the way to and from school. Parents frequently hear complaints over eve teasing that make them hurry to marry off their girls faster. Parents think of their girl children as burden and they become furious to maintain family honor. A girl child's advent to puberty makes their parents worry of protecting their chastity that becomes a major barricade to stopping child marriage. Marrying off a girl child becomes more important to protect her chastity than maintaining 18-year age restriction.

Mobile Apps and Changes in Lifestyle

Now not poverty alone is the reason behind child marriage, but some neo-cultures of various mobile apps-based lifestyles have become another issue of concern. Girl children are being focused through social media apps like- TikTok, Youtube, Facebook live, and others. A girl child tends to be elder and behaves like elders which literally changes her psycho-social status in her surroundings. The day-to-day thinking of girl child is changing by the trendy things at hand through android mobile which lessen the control of parents on their children.

Religious scriptures say nothing wrong but the people speak of those mingle their own thoughts and feelings that misguide people with sober and pious hearts. Child marriage occurs and secretly arranged by guardians, pious people since they believe the wrong message of wrongly explained scriptures. Parents who arrange child marriage in Bangladesh frequently give lame excuse of religious scriptures that were wrongly explained.

Marriage Matchmakers (Ghatak reads in Bengali) are very active in rural areas and have vulture eye on every rising girl child. The matchmakers provoke parents frequently and allure them to marry off their under-aged girl child to earn money both from parents and wealthy aged bridegrooms. On the other hand, aged wealthy bridegrooms are always ready to spend money to meet their ill desires of marrying girl child.

Reasons Are Not the Same today as Before

More open discussion within family and classroom regarding child marriage.

Parents' knowledge and vigilance on their children's movement, attitudes, and gadgets they use.

Not to force children to understand but let them understand freely the negative impacts of child marriage.

More care for both boys and girl children to let them connected them within the family and values.

Inspiring both cultural and religious practices within society and family.

Bangladesh Needs to Have More efforts

Bangladesh government is very active successful in economic, social, technological transformation including an exemplary infrastructural development and the country has become a role model of positive changes in the world. Bangladesh has a target to end child marriage by 2041 which is supposed to be achieved by 2030 according to SDGs target. The progress must be at least eight times faster than before to meet the national target, and 17 times faster to meet the SDGs target.

Writer Roton Malo is a freelance journalist and development worker. He is working at The Leprosy Mission International-Bangladesh (TLMI-B). Contact Email: [email protected]

Work from Home, Earn and Be Your Own Boss

Happiest Countries in the World in 2021