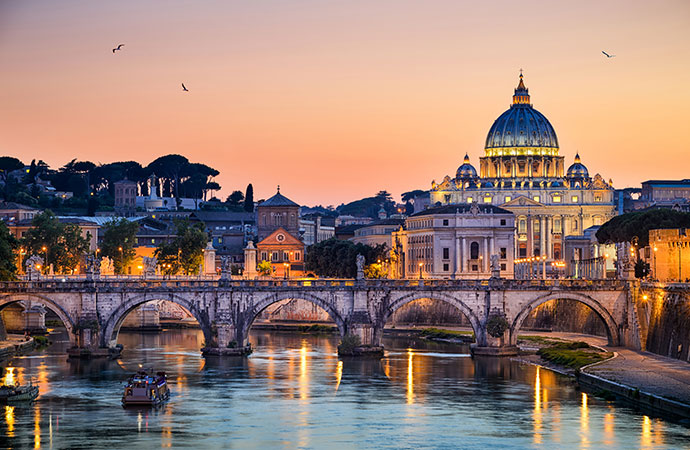 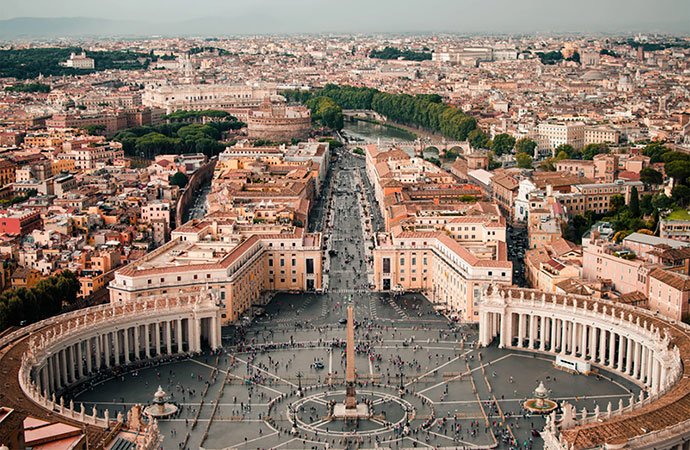 Vatican City is an independent city-state tucked inside Rome, capital city of Italy. Some claim that the name comes from a vanished Etruscan town called Vaticum established during Iron Age. The Lateran Treaty, signed on 1929 recognized Vatican City as an independent state under the sovereignty of the Holy See. Vatican City is a state or an actual country, while the Holy See is a religious entity that governs both the territory known as the Vatican and the established global religion known as Roman Catholicism. With an area of 110 acres it is the smallest state in the world. The Vatican City is a sacerdotal-monarchical state ruled by the pope. The Pope is also the bishop of Rome and the head of the Catholic Church.

The unique economy of Vatican City is supported financially by the sale of postage stamps and tourist mementos, fees for admission to museums, and sales of publications. The main language of the Vatican state is Italian. Vatican City has Mediterranean climate with mild, rainy winters from October to mid-May and hot, dry summers from May to September. In July 2007, the Vatican accepted a proposal to become the first carbon neutral state. The entire Vatican State is acknowledged as a UNESCO world heritage site since 1984.

I, along with one of my colleagues visited this state in December 2016. Vatican City is just to the north of the city centre of Rome. It has been a major Christian pilgrimage site since the Middle Ages. It can be easily reached by public bus, train or metro from Rome. It has the shortest national railway system in the world. We travelled by bus and crossed Ponte Principe Amedeo Savoia Aosta Bridge over River Tiber to enter Vatican. The bridge has 3 brick arcades covered with white marble.

The bus dropped us close to Pontificio Collegio or Roman College. It was established for educating future ecclesiastics of the Roman Catholic Churches. In late chilly afternoon we could see the illuminated dome of St. Peter's Basilica at our North. We found many shops along the street. Products of many world class brands are available here. Walls of medieval and Renaissance times form boundaries of this state except on the southeast side. That time walls were normally built around cities to protect the inhabitants from invaders. This wall is around 3.2 km long. Italian word "Via" is used to indicate a street. Following Via delle Fornaci we walked through a tunnel that crosses Via di Porta Cavalleggeri.

After coming up we reached a square leading to the south semi-circle of columns that surrounds St. Peter's Square. The square is of elliptical shape. We could see the St. Peter's Basilica at its western side. It is named after Saint Peter who is counted as the first bishop or Pope of Rome. He was one of the twelve apostles of Jesus. This Basilica was built on the grave of St. Peter. This is the largest church in the world with renowned work of Renaissance architecture.

In 1546, Michelangelo was appointed chief architect for the reconstruction of this structure. We saw a big statue of St. Peter at the entrance of the Basillica. The apostle is seen holding the keys at his right hand which are symbol of the power promised to him by Christ and an inscribed scroll by his left hand. Eight giant columns are placed at entrance supporting the triangular pediment above. Above the grandiose facade we noticed 13 statues. After entering the unexpected grandiosity of the building overwhelms most people.

The first thing that catches eye is a huge bronze canopy at the end of the nave. It highlights the main altar which is reserved only for the Pope himself. It's interior is beautifully decorated with shiny golden mosaics. It has the largest interior of any Christian church in the world. Tombs of many Popes are located in the lower level of this Basilica. Visitors can climb up to the top of the dome.

Bird's-eye view of Vatican City as well as a breathtaking panorama of Rome can be enjoyed from top of the cupola. The pope presides at a number of liturgies throughout the year both within the basilica or the adjoining Square. From the balcony of the church overlooking the square, the Pope gives his blessing to the crowds. The area to the west of St Peter's Square has no public right of way.

We strolled around the Square and saw few Swiss Guards who provide security here. They put on multi-coloured Renaissance-era garb and they have been protecting Popes since 1506 AD. Two beautiful fountains on North and South edge of this square attracted our attention. An obelisk stands prominently at the centre of this square. It is the oldest monument and made of red granite. We came to know that this 25.5 meter obelisk was brought from Egypt and weighs around 350 tons.

Mostly on the western side decorated gardens account for more than half of this territory. The gardens date back to medieval times. Exquisite fountains and sculptures added beauty to the gardens. There is no general public access to the gardens.

The Apostolic Palace, located North of St. Peter's Square is the official residence of the Pope. The palace has within it several beautiful gardens, fishponds, museums, natural conservatories, and a library. The Pope exercises principal legislative, executive, and judicial power over the State of Vatican City. Pope Francis, born in Buenos Aires, Argentina, was elected on 13 March 2013.

Vatican City is one of the few widely recognized independent states that has not become a member of the United Nations. Walking northwards we saw Vatican Library which was founded in 1451 AD. It holds few oldest manuscripts, drawings, prints, and books which are available in their original form. This is majorly considered as a research library for history, law, philosophy, science and theology.

Entry gate of famous Vatican Museum is along the northern boundary wall. Visitors need to enter before 4pm. The museum remains closed on Sundays but on last Sunday of each month entry remains free. It is also known as Gregoriano Egiziano Museum. Many masterpieces of painting, sculptures, tapestries and other wonderful artifacts of historical and cultural significance are arranged in around 54 galleries. It holds paintings by Leonardo da Vinci, Michelangelo, Raphael, and Titian. This museum also has an extensive collection of ancient Egyptian, Greek and Roman artifacts. There is a cafeteria in the basement of this Musuem.

The staircase is shaped like a double helix which means that it was constructed with two interconnecting spirals with one leading down and one leading up. It allowed crowd to move freely in each direction. Crowds have to move in one direction only southwards.

Almost at the end exquisitely decorated Sistine Chapel is located. The frescoes of the Sistine Chapel are considered to be a cornerstone of High Renaissance art. It is not allowed to take pictures or to talk loudly in the Sistine Chapel. Papal election formalities also take place here. Famous black or white smoke can be seen emitting from here during the papal elections. In its ceiling painting an ancient method for painting murals were used that relies upon a chemical reaction between damp lime plaster and water-based pigments to permanently fuse the work into the wall. We felt painting on such high ceiling and decorate the rest of it with stucco was challenging.

We returned to Saint Peter's Square and started walking straight eastwards following the Via della Conciliazione. It is the widest road leading up to Saint Angelo Castle by the River Tiber. We noticed a white line along the limit of the square which demarcated boundary of this state with Rome. All the hop on, hop off open top sightseeing buses from Rome stop here.

Many souvenir shops can be seen along this street. They sell many items like postcards, calendars, statues, paintings and books. Handmade boutique and showpieces project much craftsmanship. Visitors typically leave this city before sunset, so nightlife here is virtually non-existent. We found few restaurants along this road arranged outdoor sitting arrangements. Here Italian food like pizza, Cannoli and pasta dominate the menus. The famous food of Vatican City also adds up the charms in its immaculate beauty around the world.

Castel Sant'Angelo, also known as Hadrian's mausoleum, is a cylindrical fortress. Emperor Hadrian commissioned the mausoleum as a resting place for himself and his family from 135 to 139 AD. The structure was later used as a fortress and castle by the popes. At the time of its construction it was the tallest building in Rome. Ponte Sant'Angelo or the Bridge of Hadrian connected both banks of River Tiber and located just to the South of this castle. The bridge is faced with travertine marble and has three arches. The bridge is now solely for pedestrian, and provides a photogenic vista of the Castel. As we proceeded further inside Rome, structures of Vatican faded but never the memories.

Vatican City has the highest tourist to resident ratio in the world. The largest numbers of pilgrims visit this city at special moments in the liturgical year, such as Christmas or Easter. Walking tours help to see the wonderful city. Tourism is one of the principal sources of revenue in the economy of Vatican City. It has its own currency, telephone system, postal service, passport, banking system, newspapers and radio station. This country lacks geographic features like lakes, mountains, rivers or valleys. In various structures architectural styles such as Roman, Baroque, and Gothic are mostly observed.

To avoid large queue in tourist spots online booking in advance is suggested. Most sites have audio guide facilities which allow gaining enough detail. Visitors should follow strict dress code here like covering shoulders and not putting on short dresses. Vatican has always been a place sacred to the arts. The sheer amount of art, history, antiques, opulence and beauty of this small city state can impress visitors. Obviously it's a trip of lifetime.

From the Editor-in-Chief: Reimagining the future of ...