Alok Sharma, helming COP26, gets a wet taste of the Sundarbans 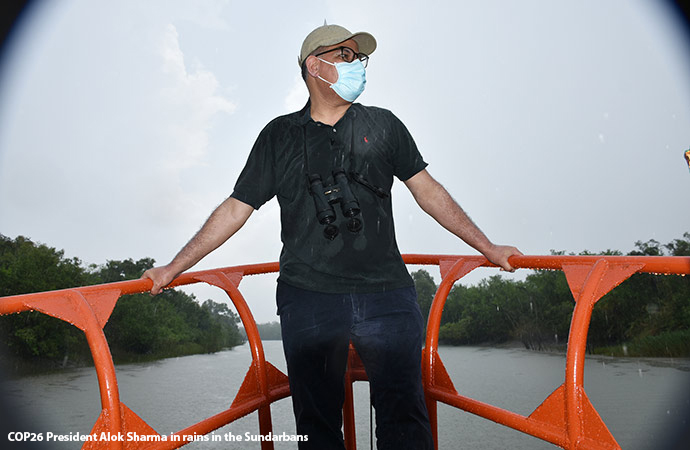 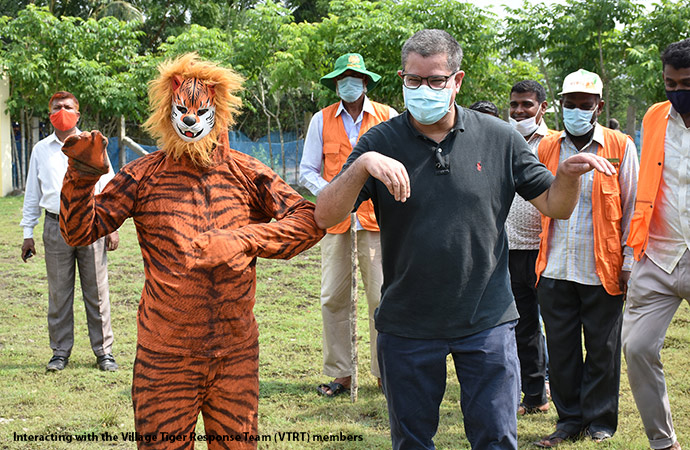 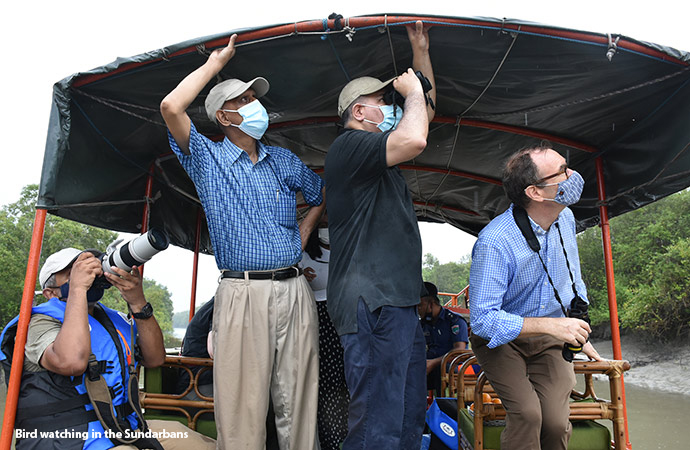 The Rt Hon Alok Sharma, MP, UK Cabinet minister and the man presiding over the process leading upto and including annual UN-led talks on climate change, the Conference of the Parties or COP26, visited the Sundarbans recently. As part of the itinerary, he also visited the WildTeam Conservation Biology Centre (WCBC) in the Sundarbans on the 3rd June, 2021. The British High Commissioner to Bangladesh, Robert Chatterton Dickson, and his other colleagues from the UK accompanied them.

It rainedin the Sundarbans. While standing on WildTeam's Forest Tiger Response Team boat, Alok Sharma was saying, and he later put it down in a tweet: "Here we are in Bangladesh in the Sundarbans ..... and we're just seeing the really positive impact that these mangroves have, both in terms of biodiversity capturing carbon dioxide emissions but also protecting communities the ferocity of typhoons when they come through. And hearing the stories about the work that is being done by the TigerTeam to ensure that tigers are protected at the same time as the humans are protected in the villages. And the aim is to ensure that nature can be at one with humans as well, and it is really quite spectacular - you have to be here to really experience this - we're right in the middle of the mangroves with some rain coming down and seeing the incredibly lush vegetation that is here. It's an absolute honour to be able to visit something like this, and of course we should be doing everything we can to preserve these sort of mangroves and this sort of biodiversity. It's quite remarkable. It's really quite remarkable."

During his visit he came to know about WildTeam's pioneering work with the Forest Department in Tiger Conservation through engaging the local communities. The tiger population has rebounded slightly - at least the decline has been halted. The number rose to 114 in 2018, up from 106 recorded in 2015.

Mr Sharma met with the Village Tiger Response Team (VTRT) members, and the TigerScouts. In 2007 WildTeam formed the VTRT by engaging the communities for managing human-tiger conflict. WildTeam also formed BaghBandhus (tiger ambassadors) to improve community engagement and raise awareness within the community.

WildTeam, with the support from USAID's Bagh Activity, started Sundarbans Education Centres in five schools around the Sundarbans. With their support TigerScouts were formed with secondary school students from the Sundarbans villages, to educate school children to build an environment friendly future generation.

The VIP guest, along with the TigerScouts, planted a 'sundari' sapling at WCBC's 'mini Sundarbans'. It is believed that Sundarbans has been named after the 'sundari' (Heritiera fomes) tree that propagates through the forest. The British High Commissioner also planted a sapling.

WildTeam built WCBC with the support of IUCN-KfW to engage the communities to manage the natural resources in a sustainable way. Due to increasing salinity, there is an acute shortage of drinking water in the area. WildTeam, with the support from a philanthropist, built a desalination plant at WCBC premises. The VIP guest visited the plant, and witnessed how local people left containers to collect sweet water from this plant.

During his visit to Bangladesh Mr Sharma met the hon'ble prime minister, Sheikh Hasina, and other government ministers, and youths to discuss climate issues. A joint statement on UK-Bangladesh climate action was signed, which is a foundation for a long-term climate partnership. The UK will host the 26th UN Climate Change Conference of the Parties (COP26) in Glasgow in November 2021. It is understood that the climate talks will be the biggest international summit the UK has ever hosted; bringing together over 30,000 delegates including heads of state, climate experts and campaigners to agree coordinated action to tackle climate change.

The COP26 president ended his 2-day Bangladesh visit by saying:

"The next decade will be make, or break, for our planet, and effective global collaboration will be vital to tackling the pressing challenges the world faces. So I am delighted to have witnessed UK-Bangladeshi climate partnership in action, and heard such positive ambition from my Bangladeshi friends."