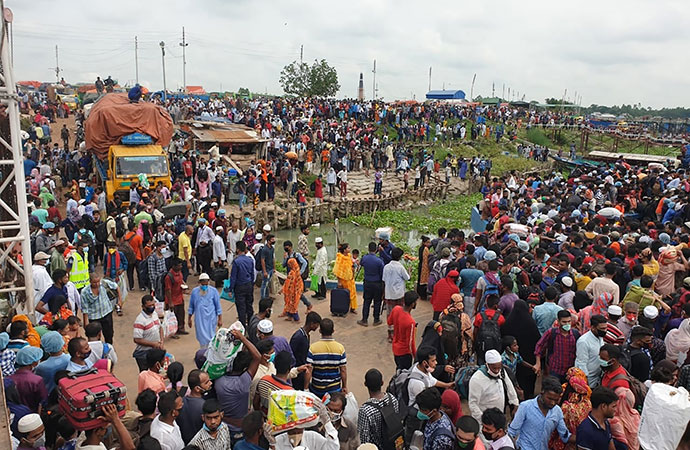 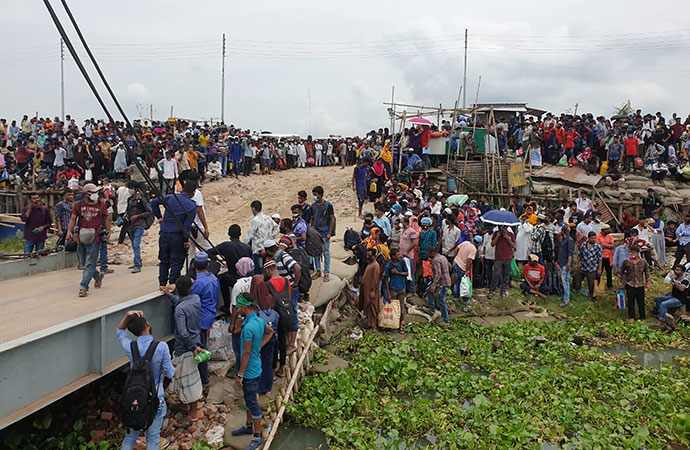 Though the government has extended public holidays and transport shutdown until May 30 to restrict mass exodus from Dhaka during the upcoming Eid-ul-Fitr, many people have started venturing out for their village homes using alternative vehicles, triggering a fresh worry of spreading the coronavirus in non-infected areas.

With the Eid only a week away, a large number of city dwellers were seen leaving Dhaka through different exit points on Monday despite monitoring by police to prevent people from departing the capital.

Police officials said they are allowing only those who have urgent reasons -- official and business purposes - to leave Dhaka but some people are departing the city on various excuses giving unauthentic information.

However, Bangladesh Inland Water Transport Authority (BIWTA) was forced to shut ferry services on Shimulia-Kanthalbari and Daulatdia-Paturia routes on Monday afternoon as huge homebound people flocked to ferry terminals there to cross the river to go home.

Until Monday morning, thousands of people left the capital by trucks, pickup vans, private vehicles, microbuses, ambulances, motorcycles and human-haulers to celebrate the festival in their respective villages ignoring the government's instruction.

Health experts warned that allowing people to either leave or enter the capital amid the alarming spike in coronavirus cases will be suicidal as the virus will spread all over the country.

Inspector General of Police (IGP) Dr Benazir Ahmed on Sunday directed police officers to take steps so that people neither can leave nor enter Dhaka taking advantage of the upcoming Eid vacation and the ongoing general holidays.

He also urged people not to go to their village homes from the capital and other cities during the general and Eid holidays and follow the health guidelines during the COVID-19 pandemic.

Following the instruction, Dhaka Metropolitan Police (DMP) has already strengthened their monitoring by setting up check-posts on different highways to strictly restrict the movement of people ahead of Eid-ul-Fitr.

A large number of vehicles, including private and microbus, were seen leaving the city through Gabtoli exit points towards Dhaka-Aricha highway, Babubazar And Postogola bridges towards Dhaka-Mawa highway.

Contacted, DMP's Deputy Commissioner (Mirpur Division) Moshtak Ahmed told UNB that they have already strengthened monitoring by setting up check-posts at Gabtoli exit points so that no one can leave the city for their village homes." Our main aim is to prevent homegoing people from leaving the city," he said.

"We're only allowing vehicles carrying essential goods and emergency services. A large number of industries, especially garment factories, are running in Savar, Ashulia and Gazipur areas. Those going to official and business purposes as well as urgent reasons are being allowed to leave the city," the DC Mirpur said.

Asked how people are departing the city and gathering at the ferry terminals when police check-posts are there, he said some people may give wrong information to law enforcers to get permission to leave the city.

Superintendent of Police (SP) of Manikganj district Rifat Rahman Shamim said there is a frenzied rush of homegoing people on highways and ferry terminals in the district.

He said police are stopping the home-goers and requesting them to go back to Dhaka.

"Only vehicles of essential goods and emergency services as well as those engaged in carrying people for urgent reasons are allowed to ply highways," Shamim said.

The police officer said people give law enforcers false information to allow them to leave the capital and cross the river.

Traffic Inspector Akhter Hossain of DMP's Uttara Traffic Division posted in House Building area, said many vehicles are being turned away at Abdullahpur exit point towards Gazipur or Ashulia if law enforcers suspect that those vehicles are carrying homegoing people.

Two check-posts have been set up on Dhaka-Mymensingh highway at Anarkoli crossing and in Chandona Chowrasta of Tongi, while two other check-posts are on Gazipur-Tangail road in Konabari College gate area and on Tongi-Ghorashal road in Mirerbazar area to turn away homebound people.

He, however, said they are allowing some vehicles to leave the capital if the drivers can show any valid reason. "It's not possible to verify instantly if anyone leaves Dhaka giving authentic information or not. We trust people. It's their moral responsibility to provide authentic information," the DC (Wari division) said.

Prof Dr Harun-or-Rashid, head of medicine department at Dhaka Community Medical College and Hospital (DCMCH), said most areas in the country are still free from the coronavirus. "If people carrying the virus go to their village homes ahead of the Eid, it'll spread to many uninfected areas. It'll be suicidal if we allow infected people to go to uninfected areas as it'll only help the virus to last long in the country."

He urged the law enforcers to strengthen their monitoring further and prevent people from leaving the capital in any way, or else, we've to pay a heavy price."

1.
Mass exodus from Dhaka raises corona concerns
2.
Corona governance in an analogue state
3.
It was an exceptional Eid for many parents amid COVID-19
4.
After the nightmare of the Gaza massacre, what comes next?

From the Editor-in-Chief: The devil we know passes; ...