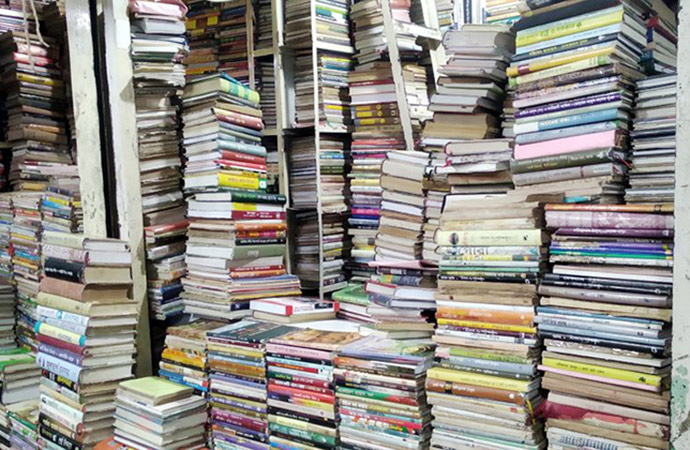 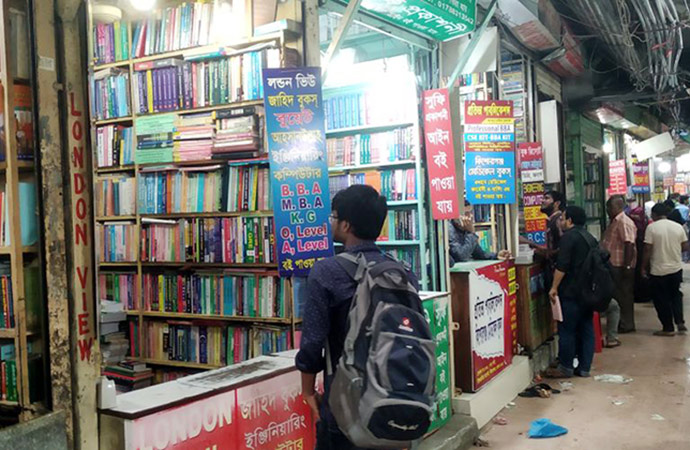 Matt Bennett, an American-born writer, singer and photographer based in Vietnam, while wandering across Asia reporting on travel and culture, had stumbled upon the streets of Dhaka and fascinatingly spotted ten things. They are, among others--the craze for cricket, addiction to tea, rickshaw art as a serious business, world's worst traffic and "chaotic mesmerizing bookstores". The city of Dhaka appears to him as a delightful maze, and he takes special fancy to the labyrinth of bookstores spreading across the narrow pavement and dark alleys. Mr. Bennett was so amazed to see the wide variety of books and "the plenty of titles on Bangladesh history and culture" that he assures "this labyrinth of bookstores will satisfy and enlighten even the best-read visitor." This satisfaction may not, however, apply to booksellers, as the great English author, George Orwell thought it. He was an assistant in a second-hand bookshop and wrote an essay titled "Bookshop Memories" based on his reminiscences where he expressed his wish not to be a bookseller full-time, mainly because it is, as he thought, "a job that tends to give one a distaste for books." But that does not necessarily mean to afford to ignore the importance of bookstores in a town. A contemporary English short story writer Neil Gaiman considers towns and bookshops inseparably linked. He even denies calling a town a town unless it has a bookshop.

From this point of view, Dhaka has been a complete town since the olden days for it has a long- drawn-out tradition of bookshops spreading out on the roadside somewhat similar to the bookshops of Calcutta College Street. College Street is the largest book market in India and the largest second-hand book market in the world. It has assumed the appellation 'Boi Para' (Colony of books) for it is dotted with a large number of bookshops-- small and big bookstores and book kiosks frequented by people from the whole city and different parts of the state as well. The award-winning writer and producer, Julian Crandall Hollick has nicely described College Street as "a half-mile of bookshops and bookstalls spilling over onto the pavement, carrying first editions, pamphlets, paperbacks in every Indian language, with more than a fair smattering of books in and out of print from France, Germany, Russia and England."

The Calcutta College Street book colony exerted an influence on Dhaka book culture, and became instrumental in the building up of similar book colonies in Bangladesh. The earliest book merchandising in Dhaka is supposed to have been launched in the 1920s and 1930s. Islamia Library is perhaps the oldest bookstore in Dhaka established in Islampur in the midst of hundreds of cloth-stores. In the wake of the partition of India in 1947, a new growth in trade in newly formed East Pakistan gave rise to the wholesale cloth market in Islampur, which drove the bookshops into Bangla Bazaar area. In this wake, some of College Street bookshop-owners migrated to Old Dhaka and established their book business in the similar fashion. Mullick Brothers is one of them. It is one of the oldest bookshops in Bangla Bazaar.

In addition to this, there are numerous makeshift second-hand bookstores lying on either sides of the footpaths in Nilkhet, Gulistan, Baily Road, Shahbagh, Gulshan I and Gulshan II and some other places in Dhaka. One must be impressed by the variety of second-hand books piled high in those stores. Nilkhet is the largest hub of second-hand books in Dhaka. Because of a couple of universities and several major colleges in its immediate vicinity, Nilkhet has become the main center for selling and buying academic materials. Not only a book market for teachers and the students, Nilkhet has also been the paradise for the poor bibliophile. You can almost have any books on any subjects under the sun-- from Aesop's Fables to Bengali Folk Tales; from Hemingway to Dan Brown; from Dale Carnegie to Dr. Lutfar Rahman; from astronomy books to culinary guides; from playboy mags to pin-up chotis, and numerous others from sacred to profane, magic to witchcraft, matrimonies to horoscopes, and so on and so forth. Though the Nilkhet bookshops are mostly second-hand bookshops, people from all walks of life, regardless of ordinary and out of the ordinary visit them. I am still a regular visitor to Nilkhet bookstores and have been left with many funny experiences about them. It is said that George Bernard Shaw once, while browsing in a second-hand bookshop, was amused to find a copy of one of his own books which he himself had signed inscribing the words for a friend of his: "To ..., with esteem, George Bernard Shaw." He immediately bought the book and returned it to the friend with a second inscription: "With renewed esteem, George Bernard Shaw."

The rise and fall of book merchandising in Aziz Super Market of Shahbagh is a yardstick of measuring the book culture in Dhaka. The market was launched towards the closing decades of last century (20th) primarily as a book market, which enjoyed huge popularity among readers, writers, publishers, socio-political and cultural activists and ordinary folks for its allegiance to true Bengali culture and stance against Ershad's autocratic regime. The publication industry revolving around Aziz Super Market was doing a brisk trade, and helped create lots of fresh writers, publishers and readers. The market became a rendezvous for creative minds and connoisseurs who would spend prolonged periods in idle chit-chat. However, this literary fervour came to a halt, and the agents for creative development were thwarted by the forces of philistinism. The internal dynamics of the corporal world made a profound impact on the book culture and publication industry. The ghost of commercialization has befallen art and culture. Therefore, prompted by mercantile interests, the bookshops of Aziz market have turned into basic commodity shops in order to run for profit. People, largely, seem to be losing interest in the act of reading. It appears as if reading itself is a backbreaking task. Back at home from long day's work, weary and exhausted, they tend to fall back upon the electronic media for easy and effortless entertainment. The tendency towards reading for passing exams or getting good grades may remain unabated, but the propensity to read for pleasure is alarmingly waning. This is a big hurdle standing in the way of literary pursuits-- a real hard time for book culture in Bangladesh.

There is, however, a comparatively new and more sophisticated trend of book culture in Dhaka, which has found expression in the introduction of some independent world-class bookstores established after the fashion of the West. Among others, Words N' Pages in Gulshan 2, Bookworm in Old Airport Road, Tejgaon, Pathak Shamabesh Centre in Shahbagh are bookstores of this kind, which are more comfortable and browser-friendly for the sophisticated and well-to-do bibliophiles. These bookstores accommodate study space, cafés and eateries, and performance space all in one. You browse shelves after shelves to pick the books for yourself, study them hours after hours, and buy them if you like. In addition, you can hold meetings, discussions or roundtables, or have rest and refreshment. On display remains a wide and varied selection of books by international bestselling authors and fresh indigenous writers. This sort of book business can play a vital role in the development of the book culture of the capital. However, the poor bibliophiles who prefer buying second-hand books from the street-side makeshift bookstores at the lowest price cannot benefit from these expensive bookstores.

We, however, do not discourage anything relating to the enrichment of Dhaka book culture except for the illegal act of piracy. We have no problems with our traditional second-hand bookshops on the street-sides, nor do we have any with the expensive independent bookshops of the shopping arcade. Our only problem lies with the wholesale piracy of books and other reading materials. Pirate editions of rare and popular books are flooding second-hand markets, and the health of book culture is being adversely affected by it. Book pirates are the very antithesis of what the book culture of Dhaka as well as the wider culture of the society at large needs.