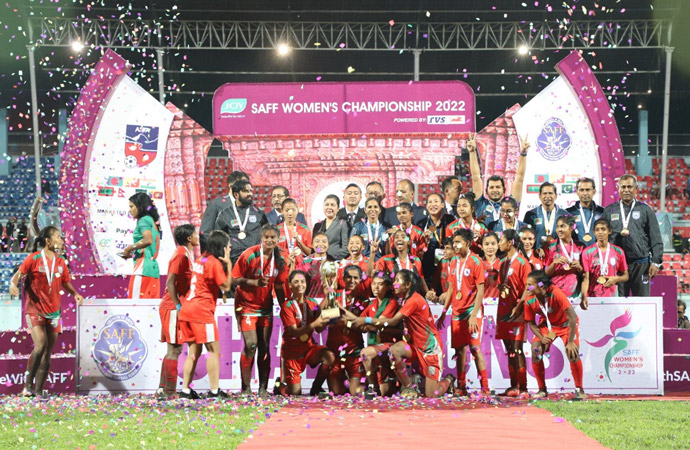 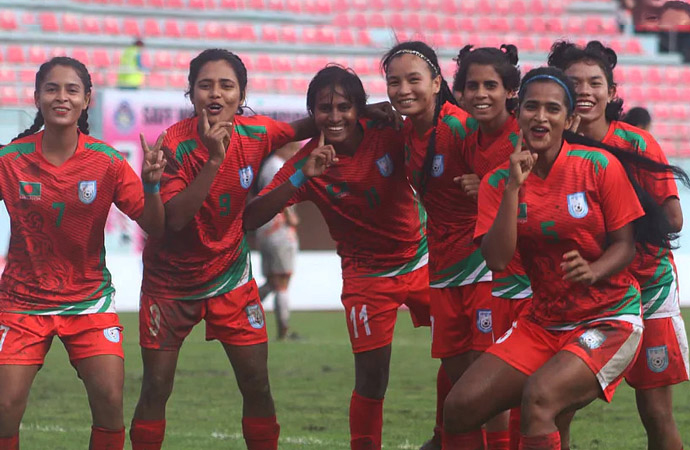 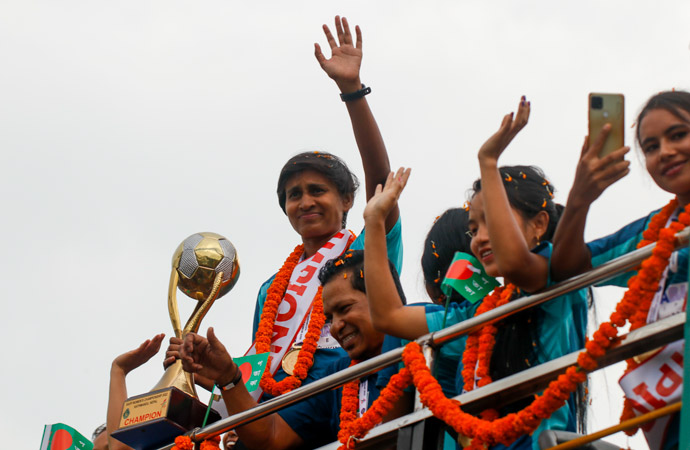 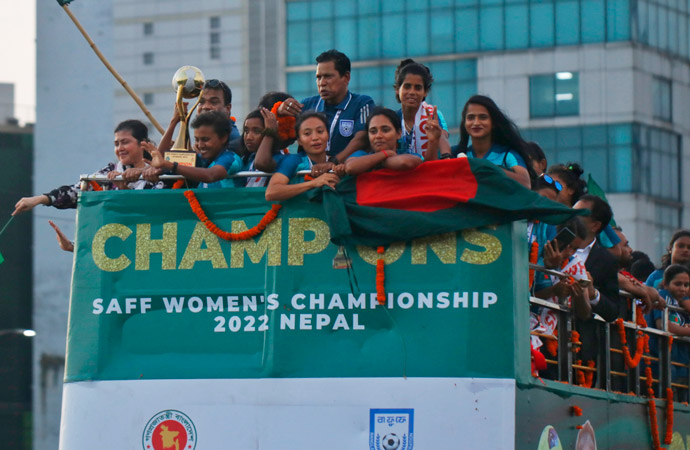 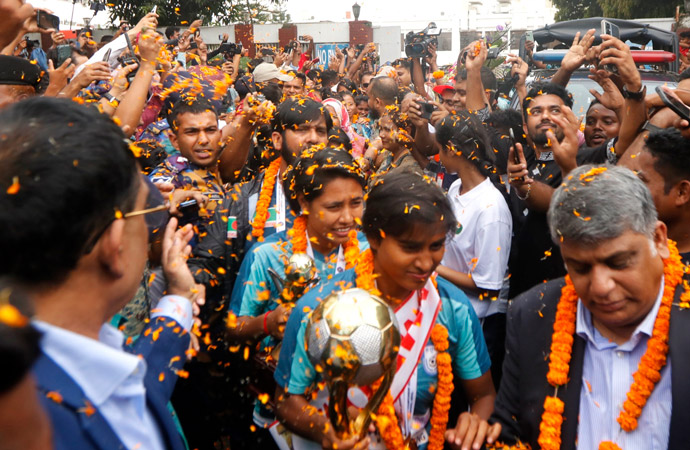 She was speaking at BFF's official press conference to welcome back the triumphant Bangladesh team from the SAFF Women's Championship 2022 in Nepal.

By the time Sabina got the mic, night had fallen. She had just come off the euphoric high of an open-top bus parade through the city, for the country to welcome back its heroines in a befitting manner.

The scene at the BFF premises was chaotic, and the captain, as well as highest goalscorer, and not to mention best player of the tournament award winner, must have been tired, finally. In World Cup terms - she won the Golden Boot, the Golden Ball, and lifted the trophy.

Sabina expressed her gratitude to the 160 million people of Bangladesh for giving them such a historic reception and providing all-out support.

"We are staying at the BFF camp together for the last four to five years, BFF President Kazi Salauddin told us to work hard to achieve success. We did that with the support of BFF and other authorities concerned, and at the end of the day we got the desired result," Sabina added.

Head Coach Golam Rabbani Choton said "Our turning point was the start of the countrywide talent hunt program, then came long-term training camp in 2016. From there we were then optimistic of reaping the fruit when the girls would turn to 19-20 years old. It wouldn't have been possible for us to be the champions without the continuous support of BFF, the hard work of the players."

But he was keener to point out: "Our team won its first ever SAFF Women's trophy playing dominating football all throughout."

He is absolutely right of course. A fact that somewhat faded behind the euphoria of lifting the maiden trophy is how brilliantly the girls played. Most people would have seen only the final - where it was clear that from the very first minute, Bangladesh were looking to attack, and did - winning a corner.

Once they went ahead, they didn't even sit back - they kept looking for a second. Except for maybe a cagey 20-minute period in the second half that ended with Nepal pulling one back, Bangladesh were clearly the better side. The fact that it was being played in Kathmandu, seemed to be lost on our Tigresses.

All three goals were beautifully executed, combining technical skill and footballing vision. Actually this has been nurtured in this generation of footballers by their participation in the steady progress made through the age-groups in South Asia since the middle of the last decade - Choton is right.

He has bred a generation of women footballers who press like demons, a team that moves forward working in neat triangles throughout the pitch, and with emphasis on technique from the first touch. The girls grew up idealising 'tiki-taka'.

They are the embodiment of joga bonito - football's immortal commitment to beauty - and Choton no doubt enjoys that most. Let's not forget, their goal record from the tournament was an incredible 23 scored to just 1 against.

BFF President Kazi Salahuddin, who received the team at the BFF office Wednesday evening, gave all credit to the players and team management for their success.

"After winning the SAFF trophy, our next target is to play in the Asian level with teams like Thailand, Korea and Japan," he said.

Earlier, the Bangladesh team was accorded a grand reception on arrival at the Hazrat Shahjalal International Airport in Dhaka from Kathmandu Wednesday afternoon. The Tigresses earned the dream title for the first time beating five times runners up and hosts Nepal 3-1 goals in the final in Kathmandu Monday evening.

Bangladesh broke the complete domination of India through previous editions of the tournament. Before the final, we knew the 6th edition would produce the first champion outside India, the regional giant. It turned out to be Bangladesh, and deservingly so. Everybody has been dazzled by their play in this tournament. It even won the Fair Play Award - as if anymore proof were needed of their clean, beautiful brand of football.

India had been confronted earlier - and ruthlessly disposed of, 3-0, in the group phase. That game itself seemed to symbolise the end of an era. And the Bangladeshi girls did it themselves, shattering the confidence of their potentially toughest rival, who came second in the group and were eliminated in the semifinal by the hosts.

Bangladesh's consistent performances in women's football in the age groups in particular, since the middle of the last decade, foretold something special was in the offing for a while now. When that dream came true, with the ultimate triumph at senior level in the seven-nation SAFF Women's Championship, beating four-time finalists and hosts Nepal in the final at the Dasharath Stadium (Rangasala) in Kathmandu Monday evening (September 19), it almost seemed too good to be true.

This was the first time that the South Asian championship has been won by any country other than India, in the 6th edition of the tournament.

The opening goal came in the 14th minute, as substitute Shamsunnahar smartly flicked home a finish to meet a cross from the right. Shamsunnahar replaced regular striker Shopna minutes before scoring, who had to go off with an injury. Nepal were mostly restricted to long shots from outside the box, but a clever free kick had to be saved by goalkeeper Rupna Chakma on the stretch, and the ensuing corner saw the teams almost level, with a goalmouth melee ending with Nepal hitting the post.

The hosts were made to pay in the 42nd minute, as captain Sabina showed great vision to release Krishna Rani Sarkar, who unleashed an unstoppable finish into the roof of the net that gave the Nepal keeper no chance.

Nepal came back strong in the second half, and got rewarded for their pressure in the 70th minute, as Anita Basnet reduced the margin with a driving shot from the right of the box. Incidentally it was the first and only goal Bangladesh would concede in the meet.

Bangladesh restored their lead through Krishna Rani Sarkar just 6 minutes later, latching on to a through ball and finishing assuredly to ensure Bangladesh wouldn't be disappointed.

There were some nervous moments before the final whistle but when it came, the Bangladesh girls threw themselves on the field in triumph, and no one can begrudge them this success, after their steady progress in the women's game through the age groups - many of this team have been part of that steady upward graph since the middle of the last decade.

Including the final, Bangladesh won all five of their matches in the 6th SAFF Women's Championship, scoring 23 goals in the process, and conceding just one. It was the first defeat for Himalayan nation Nepal in the ongoing meet after winning all three of their previous matches.

Bangladesh captain Sabina Khatun ended as the highest goalscorer in the tournament.

Earlier, Bangladesh, the finalist of 2016, smartly reached the title deciding final of the SAFF Women's Championship for the 2nd time with all-win record crushing Bhutan by 8-0 goals in the first semifinal last Friday while four times finalists Nepal booked a seat for the final eliminating the five times champions India in the 2nd semifinal, also on Friday.

It was the first defeat for Nepal against Bangladesh in their 4th meeting in the SAFF Women's championship.

The Tigresses, who conceded six goals against India in the inaugural SAFF in Cox's Bazar in 2010 and suffered five goals defeat against the neighbouring India in the Islamabad SAFF in 2014, got rhythm in the ongoing meet by achieved a landmark of their first-ever victory against India after ten matches with a huge margin of 3-0 goals in the 3rd and last group match last week.

Earlier, Bangladesh qualified for the semifinal as the Group A champions with an all-win run securing full nine points from three matches beating the Maldives by 3-0 goals in the first match and outplaying Pakistan by 6-0 goals in the 2nd match, apart from their historic victory against India.

This was the first defeat for Nepal against Bangladesh in their 4th meeting in the SAFF Women's championship.

Sabina Khatun led the Bangladesh team from the front scoring eight goals in five matches featuring two hattricks against Pakistan in group match and against Bhutan in the semifinal to win both the prestigious awards of best player and highest scorer.

Bangladesh custodian Rupna Chakma, who displayed her brilliance under the bar, was adjudged the best goalkeeper of the tournament.

Bangladesh team, which clinched their dream SAFF Women's trophy in their 2nd attempt after 2016, was also adjudged the most disciplined team to receive the fair play trophy of the tournament.

Bangladesh, the finalist of 2016, smartly reached the final of the SAFF Women's Championship for the 2nd times with all-win record crushing Bhutan by 8-0 goals in the first semifinal last Friday while four times finalists Nepal booked a seat for the final eliminating the five times champions India in the 2nd semifinal on the same day.

The residents of Naniarchar upazila in Rangamati have been overwhelmed with joy as two of their women played key roles in the Bangladesh team emerging as the new champions in the seven-nation SAFF Women's Championship.

The best goalkeeper of the tournament award went to Rupna Chakma, who displayed her brilliance under the bar, and the solid performances of defender Ritu Porna Chakma have thrilled the Naniarchar residents.

The two families and their neighbours are eagerly waiting to receive them with love for their historic triumph in the tournament. Fans and journalists are thronging their homes to congratulate the families. The girls will not be home till September 29th, staying at BFF House in Dhaka till then.

Following the success, Rangamati Deputy Commissioner (DC) Mohammad Mizanur Rahman visited their houses on Tuesday noon with sweets, fruits and flowers. The DC also handed over a check of Tk 1.50 lakh each to their families as financial assistance.

DC Mizanur said Rupna and Ritu Porna have enhanced the reputation of Bangladesh in the world by showing their extraordinary playing skills in the SAFF Championship.

"They are the pride of our entire nation. We are proud of them. We are ready to assist their families."

He called for the regular practice of sports in every area to uphold the reputation of players of the hill tracts. During his visit at Rupna's dilapidated home, the DC also instructed Naniarchar Upazila Nirbahi Officer (UNO) Bajlur Rahman committed to do everything necessary to build a new house for her and to improve the road leading to her house.

UNGA: Dysfunctional, impotent, out-of-touch and yet ...

A day Bangladesh won’t forget - when the girls came ...