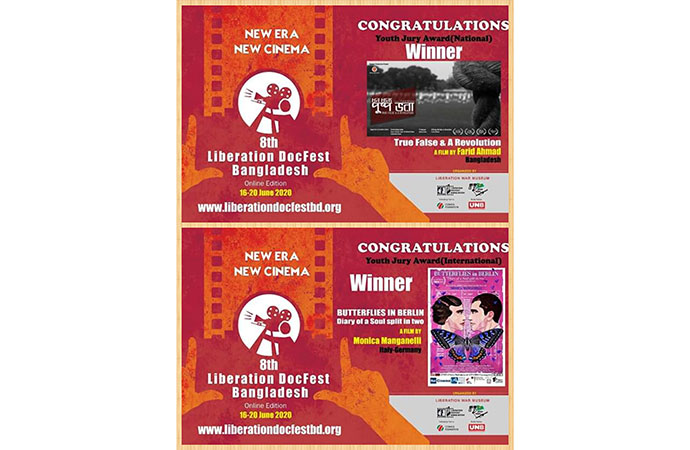 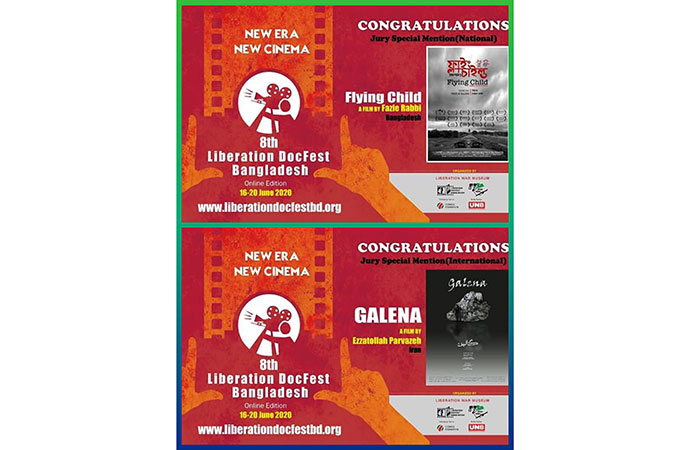 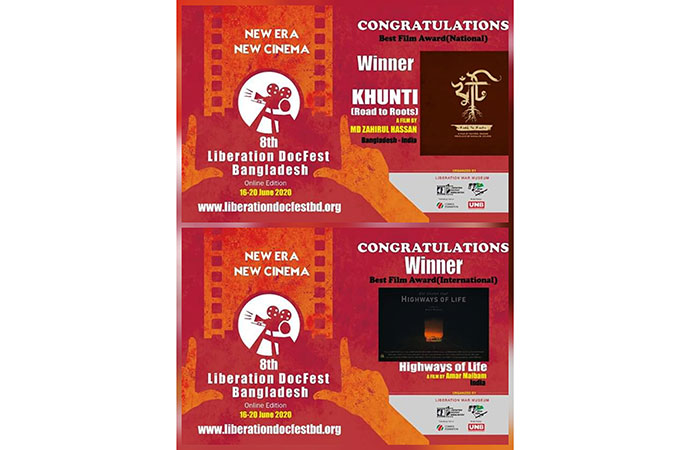 Ever since Scottish filmmaker John 'The Moviegoer' Grierson coined and started using the term 'documentary' in 1926 to address the 'real-life' incidents and scenarios into 'reel-life' presentation, documentary films became a monumental addition to the vast realm of modern culture. From time to time, the successful journey of documentary films continued with carrying the historical and cultural representation of places and lifestyles of people that made many contributions to enlighten the global audience - and fast forward in 2020, the engagement just got even bigger and better. Amid the ongoing global pandemic of COVID-19, the unprecedented circumstances turned into bliss as the 8th Liberation DocFest-2020 Bangladesh became the first-ever virtual documentary film festival in South Asia, where filmmakers from home and beyond showcased their insightful visions of places and lives through their marvellous narratives and exquisite, skilful filmmaking.

Based on the lives of an indigenous community called 'Munda', the narrative of 'Khunti: Road to Roots' showcased how the community came and had to set the anchor in an unknown land that eventually became their identity. The 'Munda' community claimed about being forced to settle in the Sundarban forests of Bangladesh from Jharkhand, India over 200 years ago. As history has shown time-to-time how people had to move on from one place to another for the sake of being alive first and living standard lifestyles as optional, the movie unveiled just another story about the relationship between a group of human and their origin, their true roots.

Before creating 'Khunti' as his 3rd documentary film, Zahirul created a documentary titled 'Dhamali' which is based on a folk musical genre-turned an actual lifestyle. Apart from that, he also made a documentary biopic on Ekushey Padak recipient eminent Bangladeshi painter Syed Jahangir, produced by Ministry of Cultural Affairs, Bangladesh.

'Highways of Life' is a detailed look at the high octane lives of Indian state Manipur's highway truckers. Being a landlocked Indian state, the two highway (2 and 37) connect Manipur to the rest of the world as its lifeline. Economic blockades, lightning general strikes, armed extortion, robbery, abduction and bad road conditions make these two highways a life-threatening terrain for the truckers. The film follows a group of truckers as they manoeuvre through the highways, putting their lives on the frontline, ferrying essential commodities to serve the people of Manipur in the two intense public movements played out on the highways.

The story of 'Flying Child' takes us to a group of floating children, living in different rail stations in Bangladesh. They have no roots, no identities... sometimes they even wonder about the reason behind their existence with being clueless about their parents-identity. Some ran away from home and family when any familial crisis emerged. Aged between 05 to 12 years, the children do not have adequate food, left also with no bed to sleep. Life taught them 'Survival is the key', so they always fight each other to survive. In this age, they were supposed to receive education - unfortunately, they have no choices but to beg or pick-up the abandoned plastic-wastes to sell for food. The number of this kind of floating children is increasing day by day in the city. Even at their childhood, they get addicted to drugs while girls become engaged in prostitution. They travel one place to another with no destination... most of the time, they travel by train rooftop, which is naturally very much risky even to the adults. However - these brave chunk of floating children feels that the whole country is their lovely home.

An almost-empty village in Iran with the vivid yet cold presence of thousand years old atmosphere, and a large mine of lead and silver. A small palm tree, a deserted crab and old houses being enclosed in a desert region where the miners have no other option but live alone; and the lead character of this documentary also resides here since after the death of the husband and one of his sons. Both were the workers of the mine, lived in the same village and mineral area. She is the first retired female worker in Iran, Aunt Esmat - who was previously involved in the mine-working, and now is lonely living with miners and night wanderers along with her doll which whom she shares her side of struggle in every sleepless night. A splendid documentary film from Iran, 'Galena' takes the audience into a colourful yet colourless world where loneliness is the oldest, trusted pal to an aged, mentally tormented soul who developed the fear of being cared, and been waiting to die alone.

The film tells the true story behind the infamous Agartala Case, popularly called 'Agartala Conspiracy Case', which had set a new course in the history of Bangladesh's independence struggle. In the early 60s, some Bengali military, led by Commander Moazzem took the initiative to liberate Bangladesh (The then East Pakistan) from Pakistan (the then West Pakistan) with armed revolt. They involved leading political leaders like the legendary politician who played the key role as the liberator of Bangladesh later, the 'Father of the Nation' Bangabandhu Sheikh Mujibur Rahman to initiate the movement. They also contacted high officials of India to get support - however, their plan was detected and 1,500 Bengalis had been detained, 232 became state witnesses and 35 accused along with Bangabandhu Sheikh Mujibur Rahman put on trial. A British lawyer came to fight against the case, media played a vital role to accelerate Bengali nationalistic sentiments by treating the case as a false one. Even, the United States forecasted that the case will be withdrawn. The case was finally withdrawn due to mass uprising of 1969, but also resulted in the fall of the then 'Ayub Regime' in entire Pakistan and subsequently led the Bengali nation towards the Liberation War of 1971.

Fast Forward 47 years later, the accused admitted that the charges against them were true which is established as a false and conspiracy case in history.

Alex moves to Berlin in 1933, during the Weimar Republic period. Looking out for his peace and place in the world along with his sexual identity, he becomes the first out-of-surgery transsexual in history. Unfortunately, that happens during the National-Socialism rise - a social disruption that turned the capital of sexual freedom in the most repressed country of all times. The historical dramatic docu-animated film is made with the support of the German Federal Ministry of Culture and Media, EMILIA ROMAGNA Film Commission and MIBACT-Italian Ministry of Culture and Cinema, in collaboration with RAI CINEMA.