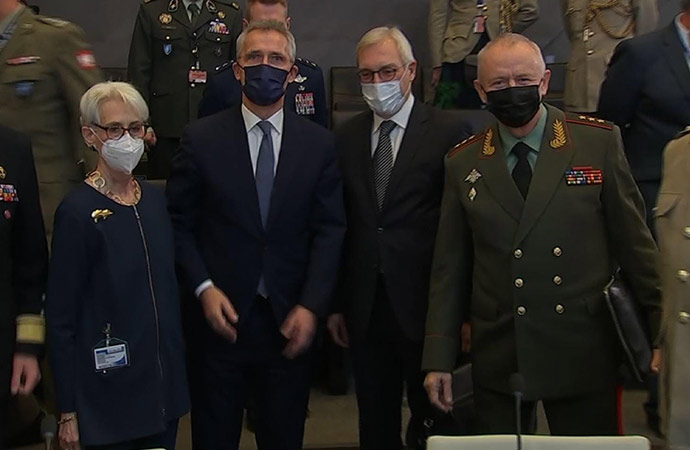 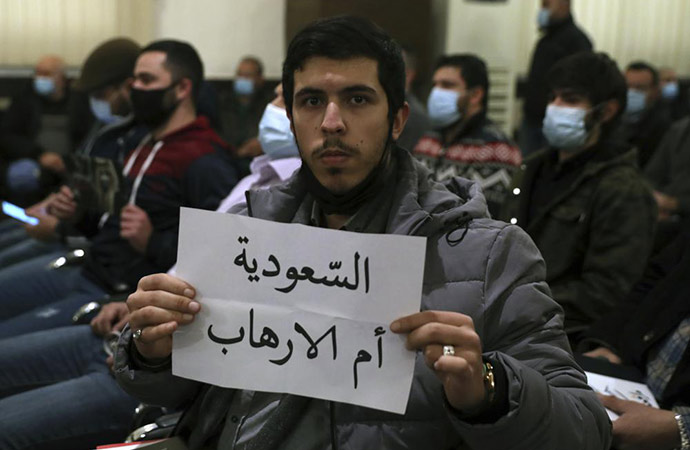 The United States and NATO rejected key Russian security demands for easing tensions over Ukraine but left open the possibility of future talks with Moscow on arms control, missile deployments and ways to avoid military incidents. The decisions came at a meeting of the NATO-Russia Council, the first of its kind in over two years. That Russia's delegation did not walk out of the talks and remained open to the prospect of future discussions after having its main positions rebuffed were seen as positive notes in a week of high-level meetings aimed at staving off a feared Russian invasion of Ukraine.

Russian President Vladimir Putin wants NATO to withdraw its troops and military equipment from countries that border Russia, which include Ukraine but also NATO allies like Estonia, Latvia and Lithuania. Putin also asked for the 30-nation military alliance to agree not to admit any more members. Speaking after the meeting at NATO headquarters in Brussels, U.S. Deputy Secretary of State Wendy Sherman reaffirmed that some of Putin's security demands "are simply non-starters."

US inflation jumped at its fastest pace in nearly 40 years last month, a 7% spike from a year earlier that is increasing household expenses, eating into wage gains and heaping pressure on President Joe Biden and the Federal Reserve to address what has become the biggest threat to the economy. Prices rose sharply in 2021 for cars, gas, food and furniture as part of a rapid recovery from the pandemic recession. Vast infusions of government aid and ultra-low interest rates helped spur demand for goods, while vaccinations gave people confidence to dine out and travel.

As Americans ramped up spending, supply chains remained squeezed by shortages of workers and raw materials and this magnified price pressures. The Labour Department reported Wednesday that a measure of inflation that excludes volatile food and gas prices jumped 5.5% in December, also the highest in decades. Overall inflation rose 0.5% from November, down from 0.8% the previous month. Most economists say inflation won't fall back to pre-pandemic levels anytime soon.

UK Prime Minister Boris Johnson apologised for attending a garden party during Britain's first coronavirus lockdown, but brushed aside demands that he resign for breaching the rules his own government had imposed on the nation. The apology, which stopped short of admitting wrongdoing, was Johnson's attempt to assuage a tide of anger from the public and politicians over accusations he and his staff repeatedly flouted pandemic restrictions by socializing when it was banned. Even some members of Johnson's governing Conservative Party say he must quit for breaking the rules.

Douglas Ross, the leader of the party's Scottish wing, said Johnson's "position is no longer tenable," and "I don't think he can continue as leader of the Conservatives." Trying to calm the furore, Johnson acknowledged for the first time Wednesday that he went to a May 2020 garden party at his Downing Street office, though he said that he had considered it a work event to thank staff for their efforts during the pandemic.

Lebanon's powerful Hezbollah group hosted a conference for Saudi opposition figures in its stronghold south of Beirut in a defiant gesture certain to anger the oil-rich kingdom. The gathering came as the Lebanese government is trying to mend relations with Saudi Arabia that hit a new low in October. Top Hezbollah official Hashem Safieddine said Saudi Arabia should stop its policy of "bullying" others as well as its interference in Lebanon's internal affairs.

The conference was attended by Saudi opposition figures as well as members of Yemen's Iran-backed Houthi rebels. It was meant to commemorate the anniversary of influential Saudi Shiite cleric Nimr al-Nimr, who was executed in January 2016 in a mass execution of 47 people in the kingdom. Al-Nimr was an outspoken government critic and a key leader of Shiite protests in eastern Saudi Arabia in 2011 demanding greater rights in the majority Sunni nation.