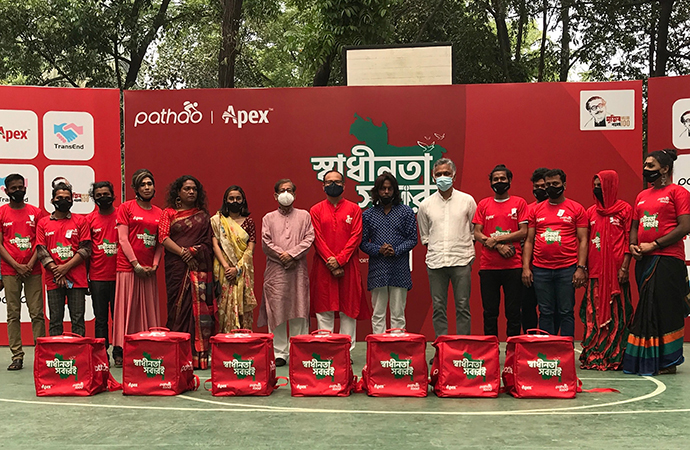 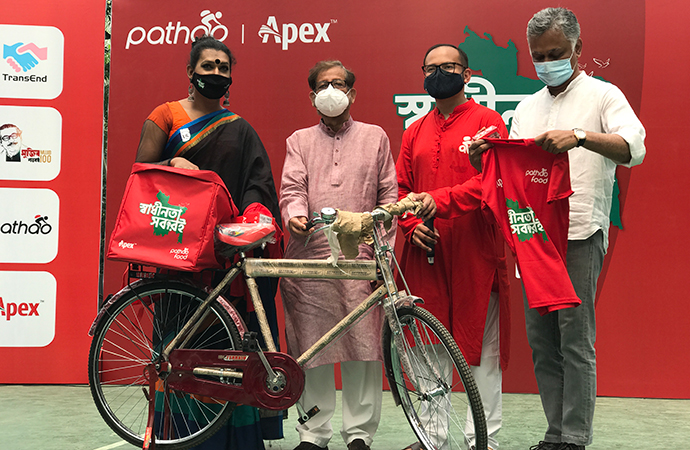 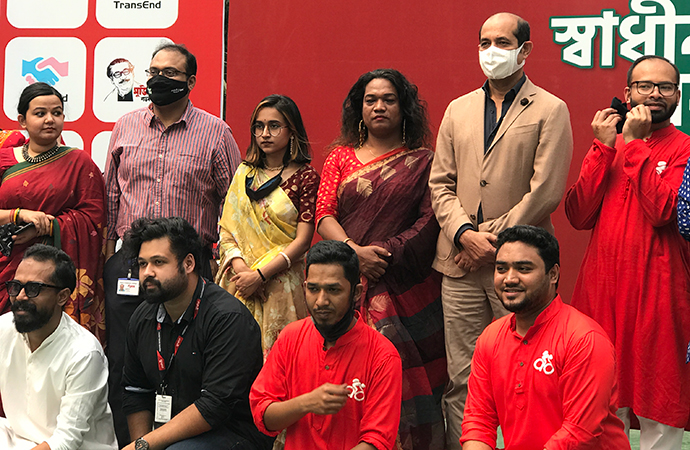 Marking the Golden Jubilee of Independence, leading food delivery company Pathao, in collaboration with Apex group, initiated a special campaign with community service group TransEnd, through which 50 transgender people were recruited as food delivery persons of Pathao, under its food delivery wing.

Celebrating the initiative, a grand ceremony titled "Freedom for All" was arranged on March 29 at the Justice Shahabuddin Ahmed park, Gulshan in the capital, where the trainees were presented with their identity cards, T-shirts, smartphones, food bags and bicycles during the event on behalf of Pathao and Apex.

Explaining the venture, Pathao President Fahim Ahmed said, "Pathao is operated with the motto 'Moving Bangladesh', and there is absolutely no way to exclude our transgender community in our collective journey towards progress. We believe the right way to celebrate the Golden Jubilee of Independence is to elevate the society altogether, and we are proud to be partnered with such an opportunity, that goes with our ideology."

The entire initiative for the marginal community was taken and operated by Tanjin's community service organization TransEnd, which has previously received appraisal for several of its effective initiatives towards the development of the transgender people. Sharing the experiences to DC, she explained how TransEnd got involved in this majestic venture.

"Previously, we have initiated a similar project with another organization called TRANSport, an app-based delivery service company dedicated to the transgender community. They recruited 10 transgender people as delivery personnels, whom we trained. Pathao got motivated through this initiative of ours, and proposed that they want to recruit 50 transgender delivery personnels marking the 50th anniversary of Independence."

"From March 5, we started the survey at Bashundhara, Gulshan, Banani, Badda, Baridhara area as per Pathao's requirement. Initially we found our potential trainees, whom we trained for four days. A total of 25 volunteers of TransEnd conducted the 'Digital Literacy' session for these trainees, where they got basic training on technology and equipment that they need to access for their work. We then trained them with cycling, communication and behavioural training. Pathao then arranged the ceremony on March 29th."

"So altogether, TransEnd basically worked as the Community Partner of the entire initiative," Tanjin explained to DC.

Regarding their acceptance as the newly recruited employees of Pathao, Tanjin said, "We requested Pathao to collaborate with the trainees as they are being the interns without real world experiences, and Pathao was very much helpful throughout the initiative and respectful towards all of them."

"Pathao is one of the leading brands in the country, and I really hope other companies will be following their footsteps as soon as possible. Initiatives like this can build up the social acceptance and financial independence for these transgender people, and we can see how their lives can be changed through being employed. We cannot imagine the 'Digital Bangladesh' without our transgender community. As TransEnd, we are very happy and positive, and initiatives like these make us hopeful that these people can leave their odd jobs and thrive towards prosperities with better lives. I believe these 50 people will sustain in their roles, and I hope initiatives like this will spread out in the society, echoing solidarity and 'Freedom for All'," Lamea Tanha Tanjin expressed her hope to DC, regarding initiatives like this.

Tunisia’s revolution under siege: When the IMF calls ...

From the Editor-in-Chief: Off on the right foot

Bangladesh & the EU: Towards a new level in relation ..