Bangladesh is the nucleus of all and proxy to none in South Asia: Speakers 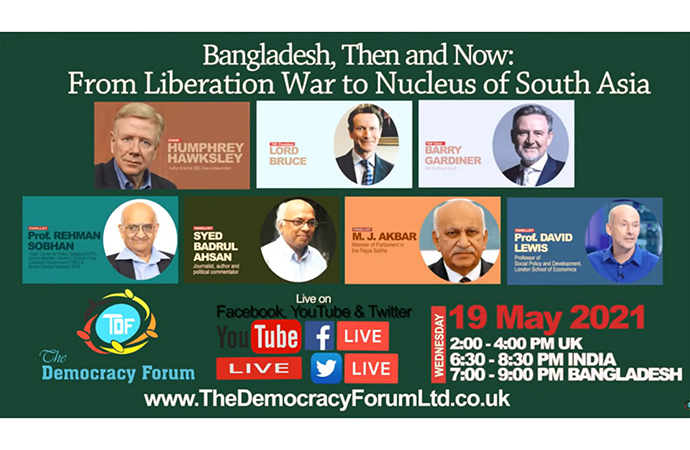 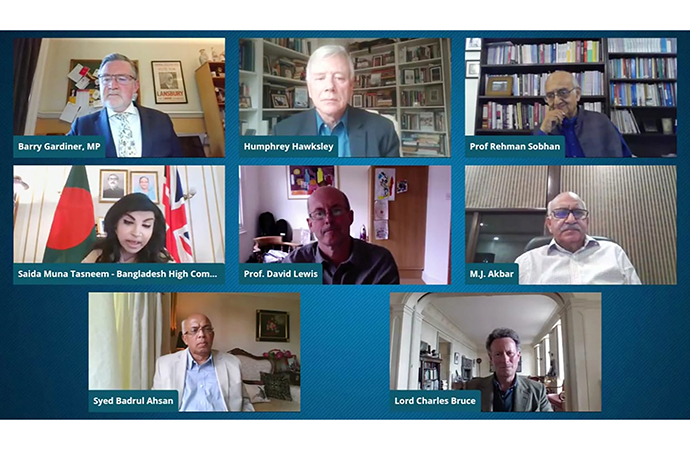 Discussing Bangladesh's emergence as the Nucleus of South Asia and its glorious and prosperous journey from the 1971 Liberation War to its progressive moves in the 21st century, distinguished speakers at a recent international webinar praised the country's standing as not a proxy to any country in the regional politics.

A recent webinar, titled 'Bangladesh, Then and Now: From Liberation War to Nucleus of South Asia' was joined by leading politicians, diplomats, editors and experts which was organized by The Democracy Forum (TDF), a United Kingdom-based NGO, which promotes ideals of democracy, pluralism and tolerance through public debate.

Prof Rehman Sobhan shed the spotlight on significant elements of the transformational journey from the period when the nation-building process was initiated at the beginning of 1972, which included Bangladesh's rediscovery of its capacity for entrepreneurship and liberation of its entrepreneurial skills.

"This rediscovery of a huge capacity of entrepreneurship in the people of Bangladesh was remarkable and in fact, liberated by the emergence of an independent nation-state. Some of the features of this transformation are to be seen in the agrarian transformation, where over a period of a half-century, we have quadrupled agricultural production, we have transformed our monsoon agriculture to an irrigated agriculture which is, in sort of much greater stability, we have diversified our crops, we have diversified into secondary products in agriculture and poultry-livestock, and we have now got a thriving non-agricultural economy which, in fact, contributes even more to GDP than agriculture," Prof Sobhan said at the webinar.

"One of the features behind the rapid reduction in poverty in Bangladesh has been the dynamic of agriculture, mostly led by small peasants. Over the years, through massive state initial sponsorship with many elements of the negative downside, we did have the emergence of an entrepreneurial class that eventually gave us the second-largest garments export industry in the world after China," he added.

On Bangladesh's emergence as the Nucleus of South Asia, Ambassador Tasneem said that Bangladesh is now only becoming the nucleus of not only South Asia but Asia and the global periphery. She credited the leadership of Prime Minister Sheikh Hasina behind the success, quoting her as a very 'visionary leader'.

"In 2009 when there was no digital vision of any South Asian country, she declared the 'Digital Bangladesh' vision, and today, as a result, we now have the presence of every big tech company in Bangladesh. She has absolutely zero tolerance towards counter-terrorism and extremism, she is promoting women empowerment and she believes in our people their capacity and their skills to resilience."

Professor David Lewis from the London School of Economics (LSE), praised the country's socio-economic achievements and approach towards the Rohingya community, however, also pointed out some of the areas that needed to be handled more carefully, including the recent state of press freedom in the country.

Answering the questions of Humphrey Hawksley regarding the probability of Bangladesh becoming a proxy in the Indo-Pacific, and the definitions on what does it mean for Bangladesh to be the nucleus of South Asia, Syed Badrul Ahsan said, "On the question of Bangladesh being referred to as a nucleus in South Asia, I think that's very well put because we are economically advancing, as many of my co-panellists have pointed out - and on the global scale in such areas as climate change, we have been doing very well."

"I don't think there is any question of Bangladesh being a proxy because over the last ten or twelve years, we have seen the government of Bangladesh demonstrating and practising a foreign policy that is balanced," Ahsan added.

Answering the same questions, MJ Akbar said, "No one is a proxy for another and I certainly don't think Bangladesh is anyone's proxy, and it's an absurd thing to actually allege. Bangladesh has its own independent views on how it should go forward, and that is the way it will be."

Echoing a similar response, Professor David Lewis from LSE said, "I think Bangladesh is at the juncture of Southeast and South Asia, in a position to manage relationships between its very large neighbours and I think that remains on the future path. The country is increasingly setting the pace in South Asia, so I think rather than a Nucleus, it is an exemplar of very important ideas and trends."

The Democracy Forum's current president Lord Charles Bruce presented his opening remarks and the closing remarks were given by Barry Gardiner MP, Chair of TDF, both lauding the footsteps of Bangladesh on becoming the central point of attention in South Asia.

Bangladeshi passports will no longer