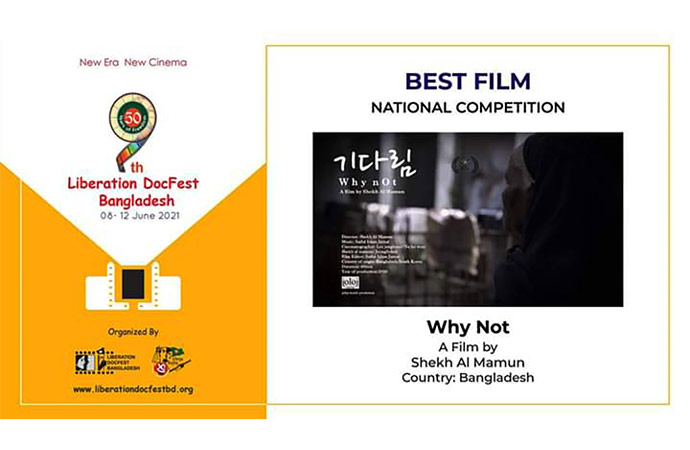 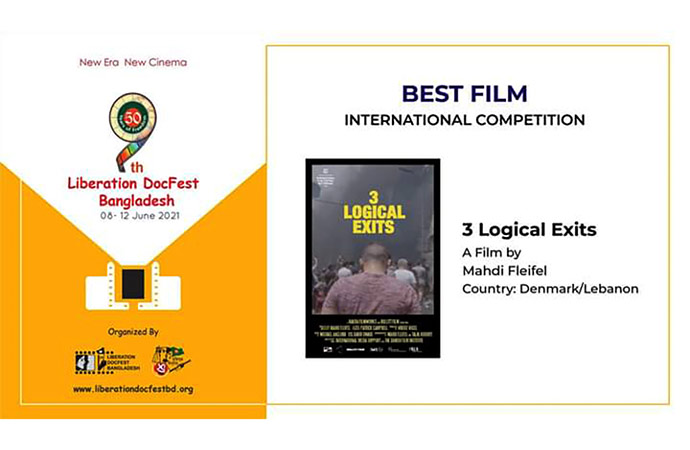 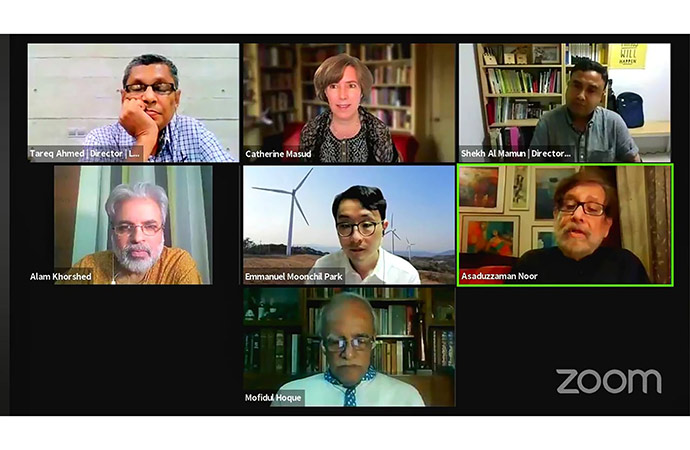 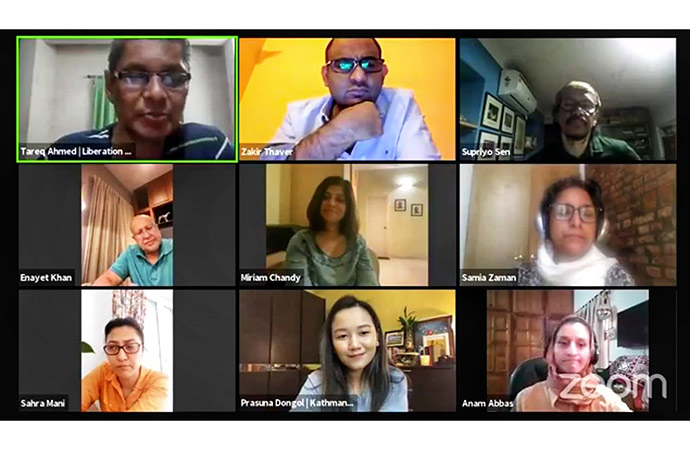 Crowning Mahdi Fleifel (Denmark/Lebanon) directed '3 Logical Exits' for narrating the ongoing liberation crisis in Palestine as the best film of the International Competition section, the 9th edition of Liberation DocFest Bangladesh concluded on July 12. The five-day-long festival, which has drawn a tremendous response and participation from film enthusiasts around the world since 2006 by providing a breathing space for the documentary admirers, amid the coronavirus pandemic for the second year in a row, also crowned the film 'Why Not' in the National Competition section this year, directed by Shekh Al Mamun.

Commenting on the success of the 9th Liberation DocFest Bangladesh, Asaduzzaman Noor, also a trustee of LWM, said: "I express my heartfelt gratitude on behalf of our Liberation War Museum, to everyone concerned with the 9th Liberation DocFest Bangladesh, supported by the Dhaka DocLab. These young filmmakers are working with a handful of limitations, still, they managed to tell and are continuously telling great stories about liberation, freedom and independence."

"Viewers and makers couldn't come to the LWM and enjoy the festival live due to the pandemic, yet everyone successfully contributed to organizing the DocFest this year in this new virtual medium. We will see each other, shake hands and have tea or coffee together in a better future, celebrating the untold stories," Noor said at the event.

Catherine Masud lauded the organizers and participating filmmakers from home and abroad, saying, "In our time, Tareque Masud and I tried to portray the truth against all threats and censorship. To the young filmmakers, I urge you to never feel afraid of telling your stories through documentaries like these. We will never rise if we rise alone. We must rise together."

Speakers and organisers expressed their heartiest gratitude to the festival's technology partner Cosmos Foundation for its constant support in both the arrangement and operation of this year's festival, continuing from the previous editions of this annual event.

Summarizing the festival, Liberation DocFest director Tareq Ahmed said that almost 2,000 films were submitted in this year's edition, and a total of 164 documentaries from 51 countries were screened throughout the five-day-long festival.

Concluding the 9th Liberation DocFest-2020, Trustee of Liberation war Museum Mofidul Hoque thanked all participating filmmakers, organizers and volunteers who came with utmost determination to organize another successful DocFest, narrating the stories of freedom and independence at their level best.

"The LWM expresses its gratitude towards the jury members and the filmmakers, and we are thankful to the participants from home and abroad. We thank these participatory filmmakers for helping us understand the situation of documentary filmmaking around the world, and for making us understand the challenges the filmmakers usually face, especially their process of overcoming all hurdles. We are thankful to our youthful volunteers, they have done an excellent job managing all the digital arrangements properly," Hoque said in his closing remarks.

He mentioned that the LWM is grateful to the cultural personality Syed Hasan Imam for inaugurating the festival, and also to the late eminent filmmaker Tareque Masud for successfully linking the past with the dynamic present and future, against all odds. Expressing gratitude to Catherine Masud, he said that Tareque Masud was very hopeful and enthusiastic about the LWM and this festival.

He also mentioned other deceased trustee board members including Ziauddin Tariq Ali, Aly Zaker and Robiul Hussein, saying all of these noted personalities were the true visionaries of the Liberation DocFest.

"What the festival is trying to achieve is very important. It's very important for a museum to get involved in this sort of audio-visual engagements and to that, festivals like this are very important and helpful. During the pandemic over the last two years, museums around the world are now reevaluating the usage and usefulness of using this new technology. Physically, our doors are closed; but we have opened our windows like the Liberation DocFest, and I believe the museum is being tremendously helped and benefitted through this festival," he added.

Expressing gratitude on behalf of the LWM, Hoque said, "We must thank the Cosmos Foundation, its Chairman Enayetullah Khan and Executive Director Nahar Khan, and its dedicated technology team for providing flawless and continuous support. They have been encouraging and patronising the LWM and this festival for such a long time."

Jury member of the National Competition section and noted Bangladeshi film critic Alam Khorshed announced 'Why Not' as the best film in the National Competition category, directed by Shekh Al Mamun. Regarding the selection, Alam Khorshed said, "The film was selected for its brilliant storytelling and especially for adopting flawless cinematic techniques." The director of the film will receive Tk One Lakh, a crest and a certificate.

Asaduzzaman Noor announced '3 Logical Exits, a film about the ongoing liberation crisis in Palestine directed by Mahdi Fleifel as the winner in the 'International Competition' section. Expressing his joy over this achievement, Fleifel said, "I will continue telling our stories through these types of documentaries until Palestine gets the freedom of its own land," he said. He will receive 1,000 USD, a crest and a certificate.

Special Jury Mention in the International Competition category for this year's festival was announced by Jury member Emmanuel Moonchil Park for 'Home, and a Distant Archive', directed by Dorothy Cheung. She is a filmmaker and artist, currently based in Hong Kong.

The Festival authority announced that viewers from Bangladesh can enjoy all of the films till the end of June, on the website of the Liberation DocFest.

Enayetullah Khan: "Thank you, the members of the trustee board of the Liberation War Museum, festival director Tareq Ahmed, distinguished participants and discussants. It's my pleasure to be present at this special session at the Liberation DocFest. Cosmos Foundation has always been a proud supporter of the Liberation War Museum, under the able leadership of Mofidul Hoque. I believe it is involved in doing invaluable work towards upholding the cult history of our Liberation War, in front of our present generation - as well as in vibing in them the spirit and values that guided our quest for independence.

My interest in filmmaking and documentaries is a subset of my wider interest in art, which I believe to be essential in nourishing the soul, and ultimately to a life lived well, for every human being. In the past, I have had the privilege of furthering this interest by acting as an executive producer on Professor Karl Bardosh's fascinating take on Natir Puja which as you all may know was the only film that Rabindranath Tagore ever made. What appealed to me about the project was its message of tolerance and humanity's shared fate.

As I survey the list of the participants at this year's DocFest, this is a message that once again resonates. I believe, with the emergence of Bangladesh as the growing self-confident nation on the world stage, it is ideally positioned to bring together and uphold all the various strands of culture and tradition that makes South Asia such a rich melting pot. The documentary is often mistaken for propaganda in South Asia. It is said, there isn't viewership for documentaries and very few people will practice this art. It's often relegated as something created without much artistic merit. Our history says otherwise. The very birth of Bangladesh saw the rise of political impassioned documentary with a strong point of view. Zahir Raihan's documentary 'Stop Genocide' during the war itself, before we lost him so tragically, was a strong beginning. Much later, when revitalizing the memory of the glorious Liberation War became necessary, out came 'Muktir Gaan' by Tareque Masud - which broke all records, and people of Bangladesh lined up to watch this documentary.

Given this background, the documentary should have been a far more widely practised art form here. I see new hope and young people with their technological competency and awareness about the most urgent issues of this time, like conservation, climate change, water crisis, identity politics etc. It makes sense that this powerful tool of communication can be a strong voice of the people, of not only Bangladesh - but for the whole subcontinent. People, from the world over, have made terms of South Asia. Now is the time for South Asians to tell their own story.

The whole region is becoming an economic powerhouse. The makers should cooperate with individuals and find funding, training, and production facilities in South Asia itself. There's some evidence of this happening in the documentary world. This year, there's a South Asian showcase in the documentary section of the Cannes market - Cannes Docs. There are local documentary labs or incubators in Bangladesh, India, Nepal and other places. I have supported some of these from the Cosmos Foundation, and I'm always willing to find the freshest story to support. If everybody present here thinks of ways we can help each other with our shared expertise and experience, we can enrich each other and help create some powerful documentaries from South Asia that can find a global audience. There are many platforms where people are watching documentaries. I ask our filmmakers to look for new audiences home and abroad, and try new ways of cooperating within the region - and always remember, there's strength in numbers. Thank you."

From the Editor-in-Chief: How the V-shaped recovery ...