The US election process, explained

Electoral College vs. popular vote in the United States

WHY IS IT THAT ONE CANDIDATE CAN WIN THE POPULAR VOTE BUT ANOTHER WINS THE ELECTORAL VOTE AND THUS THE PRESIDENCY?

That's how the framers of the Constitution set it up.

This unique system of electing presidents is a big reason why Donald Trump won the presidency in 2016. Four candidates in history have won the popular vote only to be denied the presidency by the Electoral College.

The Electoral College was devised at the Constitutional Convention in 1787. It was a compromise between those who wanted direct popular elections for president and those who preferred to have Congress decide. At a time of little national identity and competition among the states, there were concerns that people would favor their regional candidates and that big states with denser populations would dominate the vote.

The Electoral College has 538 members, with the number allocated to each state based on how many representatives it has in the House plus its two senators. (The District of Columbia gets three, despite the fact that the home to Congress has no vote in Congress.)

To be elected president, the winner must get at least half plus one - or 270 electoral votes.

This hybrid system means that more weight is given to a single vote in a small state than the vote of someone in a large state, leading to outcomes at times that have been at odds with the popular vote.

In fact, part of a presidential candidate's campaign strategy is drawing a map of states the candidate can and must win to gather 270 electoral votes.

In 2016, for instance, Democrat Hillary Clinton received nearly 2.9 million more votes than Trump in the presidential election, after racking up more lopsided wins in big states like New York and California. But she lost the presidency due to Trump's winning margin in the Electoral College, which came after he pulled out narrow victories in less populated Midwestern states like Michigan and Wisconsin.

It would take a constitutional amendment to abolish the Electoral College - an unlikely move because of how difficult it is to pass and ratify constitutional changes. But there's a separate movement that calls for a compact of states to allocate all their electoral votes to the national popular vote winner, regardless of how those individual states opted in an election. That still faces an uphill climb, though.

How does early voting work in the US election?

WHAT STATES VOTE EARLY, AND WHEN ARE THOSE VOTES COUNTED?

All states allow some form of early voting, be it by casting votes in person at polling places, voting by mail, or both. But each state has its own rules and timelines on when this occurs. Some started in September. Some don't start until mid-October, or even closer to Election Day on Nov. 3.

Just as there are 50 different timelines for early voting, there are 50 different ones for how the votes are counted. Some states allow the "processing" of mail-in ballots - the often time-consuming flattening and opening of envelopes, verifying signatures and sorting ballots into the correct piles for tabulation - to begin as many as three weeks before Election Day. Some only allow it to begin on Election Day itself, which can lead to a chaotic and lengthy count.

That's the process in several key swing states. Democrats fear this will delay the count of mail-in ballots, expected to heavily favor Democrats, and give President Donald Trump a misleading early lead that he could seize on to declare the election over. 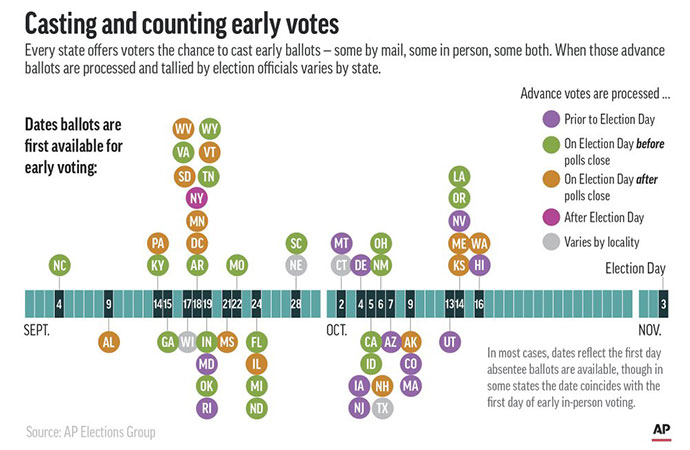 Counting the vote: Will we know who won on election night?

HOW WILL VARIOUS BALLOTS BE COUNTED, AND WHAT RESULTS WILL BE KNOWN ON ELECTION NIGHT?

Millions of Americans have already voted, but each state has different rules on when it's allowed to actually start counting those ballots. That is going to produce results coming in at very different times - perhaps days or even weeks after Election Day.

In some places, election officials can begin processing ballots weeks before Election Day. That means workers can start verifying voter information while also removing ballots from their envelopes to physically get them ready for tabulation. Doing so readies ballots for counting on Election Day and will speed up the release of results.

But it's not that simple.

In some of the most critical battleground states, laws prevent the early processing of ballots. So on Nov. 3, Election Day, officials will have to run an in-person election while also working through the unprecedented number of mail-in votes. This dynamic is likely to delay results and heighten the potential for big shifts if in-person vote tallies are upended by the counting of mail-in ballots.

President Donald Trump has repeatedly warned of voting fraud without offering any evidence. Because of that, there are concerns that he will use delays in vote-counting to declare results illegitimate. While results might come in later than usual this year, that's because of a change in how people are voting, not malfeasance or fraud.

Here is another wrinkle: Nationwide delivery delays at the U.S. Postal Service are sparking fears that ballots might not arrive in time to be counted. Republicans, including Trump's campaign, have been filing lawsuits to stop election officials from counting ballots that are delivered after Election Day.

For example: As of right now in Pennsylvania, votes that arrive by mail three days after Nov. 3 will be counted, after an intense legal battle that went all the way to the U.S. Supreme Court last week. Republicans have filed another suit against the extension. Also, Pennsylvania doesn't allow early processing of mail-in ballots, further complicating matters.

In Michigan, another hotly contested state, an appeals court has struck down a 14-day ballot-counting extension, leading the state's top election official to urge voters to drop off their ballots in person rather than use the Postal Service. Courts have also nixed similar extensions in Wisconsin and Indiana. 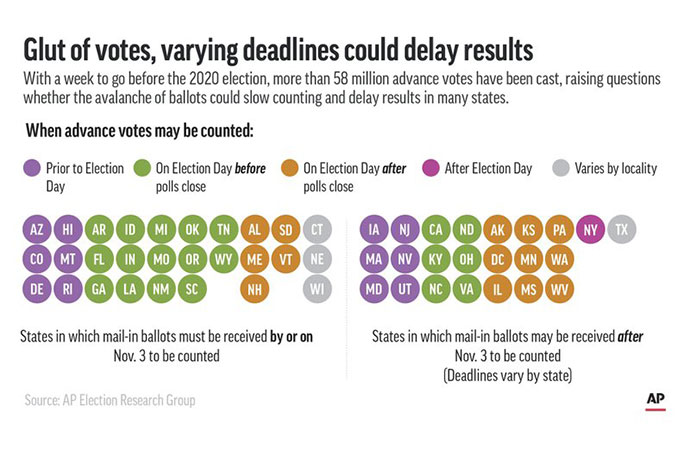 Are the nation's voting systems secure?

WHAT STEPS HAVE BEEN TAKEN TO PROTECT THE NATION'S ELECTION SYSTEMS FROM POTENTIAL INTERFERENCE BY FOREIGN POWERS LIKE RUSSIA? HAVE VOTING SYSTEMS BEEN "HARDENED" IN ANY WAY?

A key step was the January 2017 decision by the outgoing Obama administration to designate the election systems as "critical infrastructure" on par with nuclear reactors, banks and the electrical grid. The Department of Homeland Security and its cybersecurity agency have since worked to build relationships with election officials, giving top state election officials security clearances so they can quickly receive sensitive threat intelligence.

After the 2016 interference, state election officials complained that they were not alerted until nearly a year later that Russians had conducted extensive scanning of election systems, specifically targeting voter registration systems.

Communication is vastly improved heading into November, though the threat is unchanged. U.S. intelligence chiefs continue to warn Russia, China and others could interfere in the presidential election beyond so-called "information operations." There is been no indication as yet of any cyber-related attacks directed at election systems.

One of the most feared threats is a well-timed ransomware attack that could scramble or impede access to voter registration data. State election officials have been working to build redundancies into their systems so they can recover quickly in the event of an attack.

Beyond providing comprehensive security assessments, federal officials also offer routine scanning for vulnerabilities and training around best practices. While experts say improvements have been made, they are most concerned about smaller election offices with limited IT and cybersecurity budgets.

Layers of security, including firewalls, threat-detection sensors and multi-factor authentication protocols, have been added to protect voter registration systems. Federal officials noted this summer, however, that adoption of best practices in some places was lagging and it was taking longer in some cases to fix problems identified in federal security reviews. 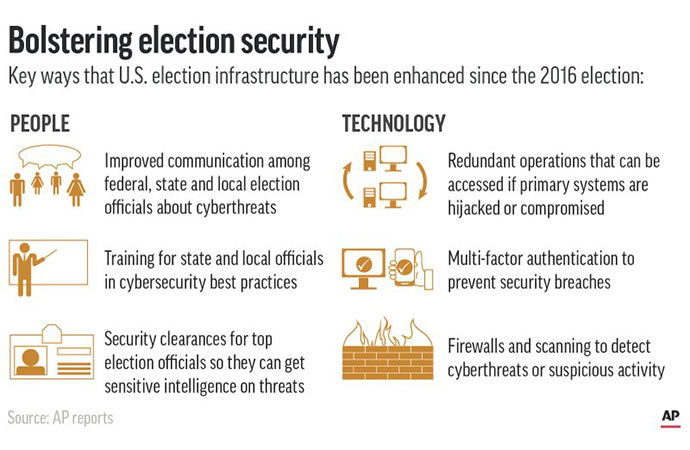 Does the federal government have a role in the vote?

WHAT IS THE ROLE OF THE FEDERAL GOVERNMENT IN ELECTIONS?

The federal government has very little role in the elections that choose who is going to run it. Elections are run at the local level and supervised by states. The federal government can help fund elections and set certain standards - such as the requirement that people can register to vote when getting drivers' licenses - through federal law. And of course Washington, D.C., plays a big role in monitoring foreign actors to make sure they don't interfere in elections. But the actual machinery of democracy is run at the state and local level.

States devise the rules of their own elections. Some send everyone a ballot through the mail, others only allow people over age 65 to use that method of voting. The administering of the polls, printing of the ballots and counting of the vote usually occurs on the county level. The state tabulates the counties' totals and declares winners of statewide races, including the presidential contest, and assigns presidential electors accordingly.

The federal government can monitor and ensure that all candidates for federal office are reporting their campaign contributions and expenditures publicly, as required under federal law. It can act to ensure that voters are not deprived of their civil rights. It has in the past sent money to help local elections offices, including $400 million in the CARES Act in March to help with shifts in voting during the pandemic. But the federal government has no role in the operation of polling places or the counting of ballots. 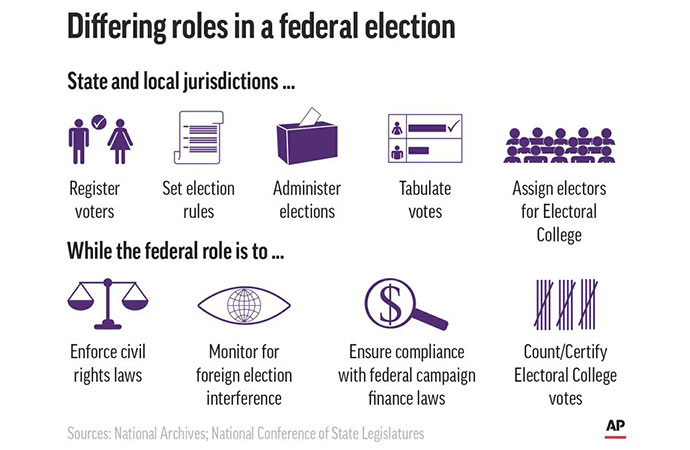 The roles of state, local and federal governments in federal elections

Q: How will the election affect control of Congress?

The makeup of Congress will be determined by the general election, with both parties needing a majority to control the House or Senate.

Democrats seem to have a good chance at winning a Senate majority, while their control of the House is not in serious doubt.

Republicans hold the Senate 53-47. Democrats must gain at least three seats to win control, or four if President Donald Trump is reelected and Vice President Mike Pence can break a tie.

Only one-third of the 100 Senate seats up are for reelection since senators serve six-year terms. This year, 35 Senate seats are up for grabs, and around a dozen GOP-held seats and two Democratic-held seats seem competitive.

In the 435-member House, Democrats are the ones defending the majority. Republicans currently hold 197 House seats and need 218 to win control. There are also four open seats that had been held by Republicans until they resigned and left office earlier this year.

A shift to mail voting is increasing the chances that Americans will not know which party won the White House on election night, Nov. 3, and it could also delay a final call on control of the Senate. But that doesn't mean the results will be fraudulent. 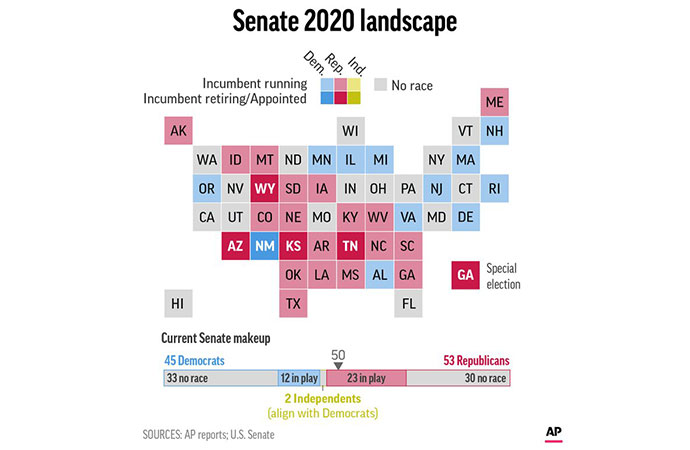 1.
The US election process, explained
2.
NCC Polls: Ivy rewrites history with a hat-trick
3.
Teenager, another killed in Ctg UP polls violence
4.
Looking for a formal EC in a politically informal state

How the mighty fall: The case of Haji Selim

Offline: COVID-19 is not a pandemic