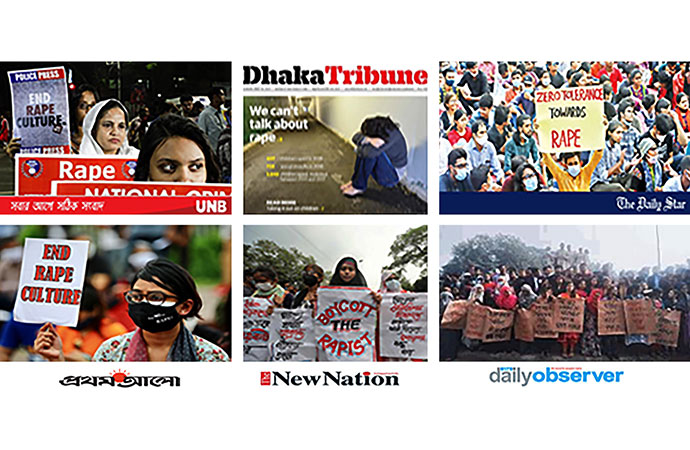 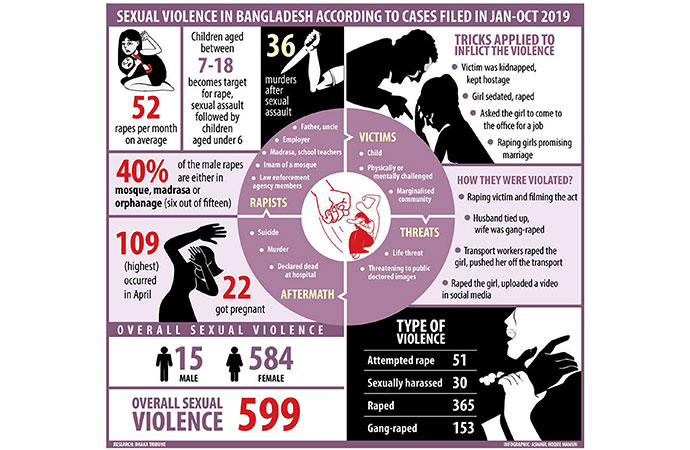 It is hard to click on any Bangladeshi news portal and not see a story or two about rape of an innocent woman or a girl or for that matter a little boy! There seems to be an epidemic of rape in Bangladesh these days. One that shook me was a rape of a housewife by some students at the MC College dormitory. I have fond memories of the MC College from my youth. The place is little outside of town, a 15-minute bicycle ride. As kids, we used to play soccer on the field that was just in front of the student hostel. So, the brutal rape allegation was jarring to say the least. Then there is a series of rape news from all around Bangladesh. There are now protests and marches. But, why now? Is this a case of access to more instant news and proliferation by social media or has Bangladesh become a much more violent and misogynistic society like say, South Africa!

According to World Population Rape Tracker, Bangladesh ranks the 41st with 9.82 rapes per million. This compares to 132.4 rapes per million in South Africa and Zero in Liechtenstein. Here is a snapshot of the statistics. 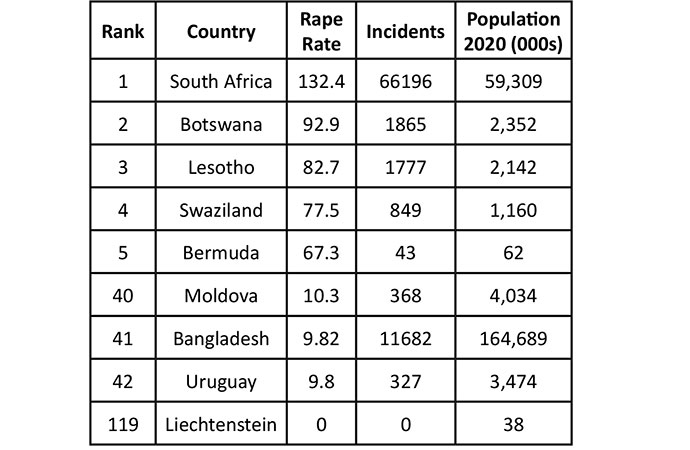 So, a country that professes a certain amount of piety and respect for women the statistics is jarring. But, what if I told you that Bangladesh has always had an undercurrent of rape culture that bursts out at times of impunity, like say cholera. The student dormitory rapes have a history. Way back when I was a little boy, older boys told me stories about how a student leader named Pach Pattu of National Student Front (NSF) would forcibly take women from cars or rickshaws and rape them in various Dhaka University residential halls! So, there is a history. Why though? Let us examine the root cases in order of importance.

Saint or a Whore: First and foremost, there is profound cultural dissonance in the way we treat women in Bangladesh. In Bangladesh, a woman is either a saint or a whore, a mother or a floozy! Nothing in between. By doing this we typecast a woman. If she is not matronly and falls in the mother category then she is a fair game floozy. We deny a woman her many forms of existence. If she works in a garment factory, or works in an office, rides a bicycle, wears sexy clothes, talks to men then we whisper that she is "characterless". Never mind the bad English of the word (there is no such thing as a character or characterless), it gives a permission structure to treat women as objects, hurl loutish comments and when the time is right assault her. Most of all, we deny a woman's sexuality. We pretend that a woman has no sexual yearning, no sexuality to display and no sexuality to own. In other words, to an average Bangladeshi man, a woman is a sexless bundle of flesh and should be that way at least always in public. If she shows any sign of sexuality, well she is "characterless" and god help her! At the core of the rape culture in Bangladesh this definitional framework makes all other behaviour possible and even acceptable. This is the permission structure that makes rape possible and maybe even inevitable.

Impunity: Rape is not sex, never was and never will be. It is a power play. A way to inflict pain, shame and misery on another human being. The thing that allows some people to take a joyride of power is a sense of impunity. You will notice that most of the accused rapists in Bangladesh are either members of Chattra League, Awami League or somehow associated with the ruling party. The reason that happens is because the perpetrators feel a sense of invincibility.

The impunity has been cultivated by law enforcement ignoring big and small crimes over time, and these guys pay no price for their crimes big and small over time. Law enforcement does not counter the atrocities because they know the ruling party patrons will come to the thug's defense. The behaviour goes on for years before blooming into an act of atrocity. For example, the rapists in Sylhet were like an occupying force at the hostel. Terrorizing the students, teachers and staff alike. They have been doing that for years, so when they graduated to rape it was just a line they crossed assuming the impunity will prevail. It may still prevail but maybe not because the case has become highly publicized and is now all over the place. The culture of impunity gives birth to bad power dynamics and let loose the evil in most of us. If the political parties did not rely on the student thugs to enforce their rule, collect protection money for the bosses and generally drown out all other voices, then maybe just maybe these thugs will not feel the sense of impunity from all crimes big and small.

The Horrible Mullahs: There is simply no getting away from the fact that the mullahs are promoting a set of values and ill-founded ideologies that are horribly demeaning to women. These mullahs are mostly uneducated bunch with very little understanding of the Quran. They try to quote from some contradictory hadiths that had no meaning even some twelve hundred years ago. Unlike the mullahs, I actually have read the Quran in translation in totality, read many hadiths as part of comparative religion study in one of the better universities in the world. The mullahs probably do not even know that the first hadith purporting to be describing Muhammad's habits and sayings came about some 200-plus years after the death of the prophet. How many of you remember the habits of someone who died say, ten years ago? A very fraught game of telephone this effort to reconstruct the past.

Forget all the history and fatwas from the past, just listen to what these guys are saying in 2020. There is a Facebook group named Bangla Waz that spews vile hatred all the time and says the most horrible things about women, other religions and generally people that do not align with them 100 percent. There is this utterly vile monkey-shit of a guy called Moulana Abdur Razzak who is spewing misogynist hatred using the Bangla Waz platform. His latest is that a girl being born is a scandal of some sort, women have no soul and must be treated as somehow dirty and beyond any redemption. You can see him ranting and raving here https://www.youtube.com/watch?v=nwnCFs1oXXw and feature=youtu.be.

Even if he agrees that women may have to be born then he spouses they are there to serve men and men can use them and abuse them. He is just the most flagrant current example of the kind of Troglodytes that populate the public space in Bangladesh in the name Islam.

Victim Blaming: You see all these supposedly educated people saying maybe somehow the victim of rape brought it on herself. It is victim blaming pure and simple. Victim blaming is possible because of the permission structure that society imposes on women something other than living breathing human beings. For example, lots of people questioned the wisdom and validity of the couple that went to MC College in Sylhet to enjoy a quiet romantic evening. In a way, they were saying by going on couples evening out they have invited rape. The hypocrisy and evil of such thought is beyond understanding. Why would a woman not be able to walk someplace without being subjected to rape? Why would a society tolerate such evil?

How do we solve this? The societal and cultural changes will take a long time and make no mistake the society as a whole will fight any changes. However, we can make small changes today. There can be legislation today that classifies rape as hate crime with a minimum mandatory sentence of say, 15 years in prison. The sentence is mandatory and there is no bargaining. This will take away a lot of maneuvering room from the ruling party and its student wing. The police need to be empowered to go after and arrest the powerful offenders. Transparency will also make a big difference.

The rapes that are publicised tend to get official attention and the wheel of justice starts to turn. The police and other law enforcement authorities should publish all incidents of rape in an easily accessible and sortable database. This will allow the public to know the gravity and occurrences of rape cases. There also needs to be legislation that classifies the vile misogynistic rants by anyone as hate speech. This will allow the country to finally de-platform the hate spewing mullahs. Since these guys rely on the Wazs and their electronic platforms for money, a declaration of their kind of speech as hate speech will cut off their source of revenue. Watch how fast they modify their behavior once their money is cut off. These Troglodytes are all about money.

Finally, let us stop treating women as some specialised species. Equality or a sense of justice requires that we treat women as humans with ordinary needs and desires, pain and pleasure. The quicker we are able to go away from the paradigm of "Soti" to just a regular person the quicker we will transform our society.

Kayes Ahmed is a Bangladeshi American serial entrepreneur, thinker and writer. He lives with his two dogs in Colorado and California