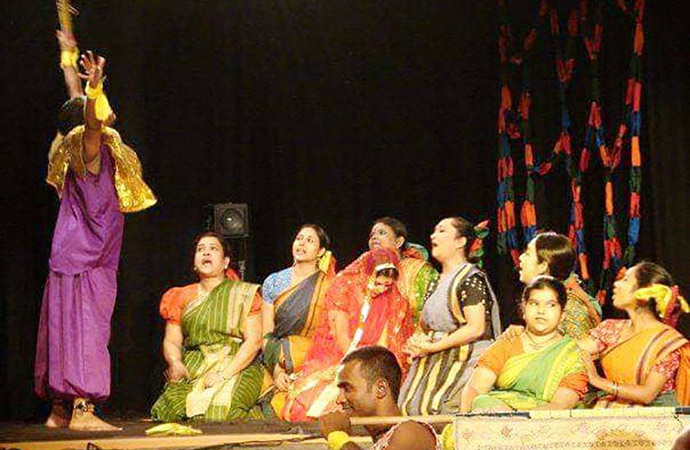 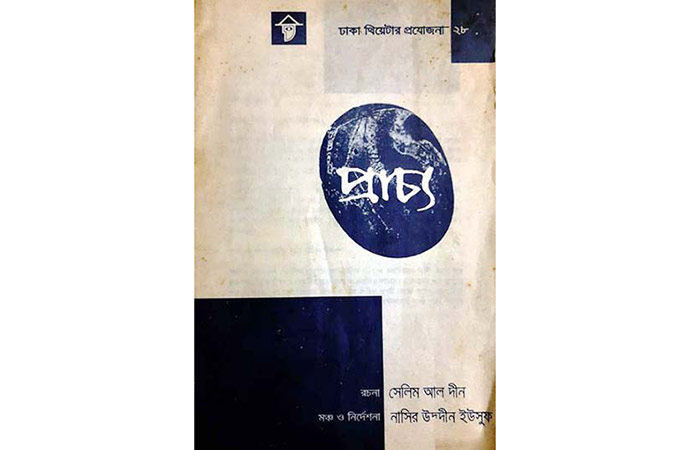 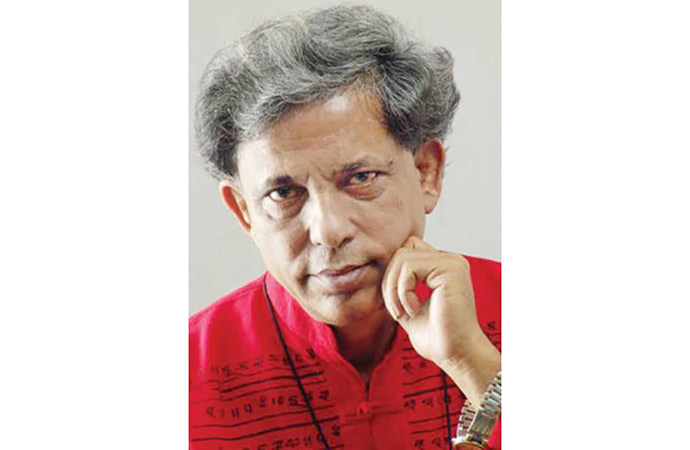 In the golden jubilee of Bangladesh's independence and victory, theatre can claim a place of pride in the field of achievements in the past 50 years. Theatrewala, a Bengali periodical on theatre in Bangladesh, has identified 50 best theatre performances out of so many in the country since independence. Dhaka Theatre's Prachya by Selim Al Deen is one of these. I did a review of this drama in 2000 in 'Theatre', a Bengali theatre magazine edited by Ramendu Majumdar. Selim Al Deen (18 August 1949 - 14 January 2008) is undoubtedly the most influential and talented playwright in the independent Bangladesh. Here I am presenting the English version of that review by me.

Selim Al Deen is a powerful playwright. His plays reflect the human struggle, love, empathy, quarrels, trust and distrust, victory, defeat, cruelty, kindness and the rainbow colours of life, especially of the rural background. His objective is to combine the folk art forms with modern experimental types. He has tried to do it at a larger scale and in a more complicated way in his play Prachya.

Usually in his plays, rural lives in their consolidated form reflected in festivals and rituals are more conspicuous than the general flow of life in rural setting. Despite his plays borrowing a lot from the folk theatre forms and adopting local tongues, his style of narration, presentation, similes, metaphors, etc. are not easy for the audience to grasp. This makes many of his plays almost unreachable to the ordinary people whose lives are his content. It is more enjoyable to the educated urban population.

The tragic death by snake-bite of a newly married girl is the subject of Prachya. The central theme of this drama is the relations between the exploiter and the exploited of society. This central tension, however, becomes obscure under cover of old rural cultures and rituals presented in an appealing way by the beautiful performances of Dhaka Theatre's skilled actors and actresses.

The story of Prachya as written by Deen is much longer than the drama staged. The contradiction between the rich and the poor is prominent in the written form than in the performance which has been dominated by the ahingsabadi (nonviolence) philosophy of the playwright and director. Devoid of its central theme of power relation, the play towards the end turns into a meaningless and mysterious digging of the courtyard in the name of digging life.

A beautiful symphony of unity resonates through numerous contradictions playing out in life and the world. Selim Al Deen has based his drama on a true story and narrated the reverse side of the Manasa Puran. The play starts with the dinner at the wedding ceremony in the girl's home. It ends at the death of Nolok, the new wife of Saifar Chan, by a snake-bite in her bridal chamber. Somej Mama pointed to the amazing similarity between the wedding and funeral ceremonies on the return journey of the bridegroom's party.

Saifar dug the courtyard throughout the night to find out the snake which bit and killed his beloved wife. Towards the morning when he could find the killer snake, he was mesmerized by its grandeur, majestic beauty and natural simplicity and innocence. Then suddenly his vision gave way to his maddening anger and a long battle between the rocking hood of the snake and the sharp knife of Saifar ensued. But Saifar lost because his old grandma stood between them and prevented him from killing the snake. The killer snake slithered away across Nolok's grave and the protagonist found peace in eternal forgiveness.

Director Nasiruddin Yousuff wrote about this ending, 'Prachya's philosophy is the philosophy of the Eastern life.' In his view Selim depicted such a deeply cruel scene to reveal the full power of forgiveness. Yet we can easily find that the snake of the homestead and the village leader Jitu Matabbar are the opposite sides of the same coin.

Saifar bought a cow with money borrowed from Jitu Matabbar. But he did not know that the loan cannot be paid with the profit of selling milk. He saved himself from going into prison by handing over his cow to Matabbar at a nominal price of two thousand taka. The dishonourable judgment in the village was that Saifar himself had to milk the cow at Matabbar's home. Despite all this he went to marry the village beauty by mortgaging his tiny piece of land. Now losing his beloved Nolok he found his whole life shrouded in curse.

Saifar borrowed money from Aijol, a son of Jitu. He once tried to murder Jitu but failed as it was Jitu's son-in-law who was returning from hat in the evening while Saifar waited by the wayside. And now while battling with the snake, he pushed his knife into something which turned out to be nothing but the shed skin of a snake. On his deathbed, Jitu asked forgiveness from Saifar and gave him all his things he took away from him. But he also asked Saifar to sell his land to his son Aijol whenever he needs money because he could foresee the unending circle of exploitation from generation to generation.

Being the most influential playwright in the independent Bangladesh, Selim's Saifar surrenders his conscience to Jitu Matabbar and lets the snake survive thanks to the age-old superstition of his grandma about the homestead snake with environmental justification. But Saifars must be aware that exploitation is not any law of nature, but a system of the present society that has arisen out of certain historical stage and is destined to go away at another higher level.

Director Nasiruddin Yousuff made a very complicated drama with many episodes into an enjoyable presentation with very skilled, simple and attractive performances by the members of his theatre troupe.

Let me finish this review by saying that Selim Al Deen was one of the key persons in achieving a place of pride for our theatre during these 50 years of independence of our country. Our present day theatre can only move ahead with more playwrights like or better than him in the future.

Adieus to the legends, in loving memories of 2021

1.
The mother of all models
2.
From Tragedy to Triumph
3.
Top agrochemical company ready to explore partnership with Bangladesh