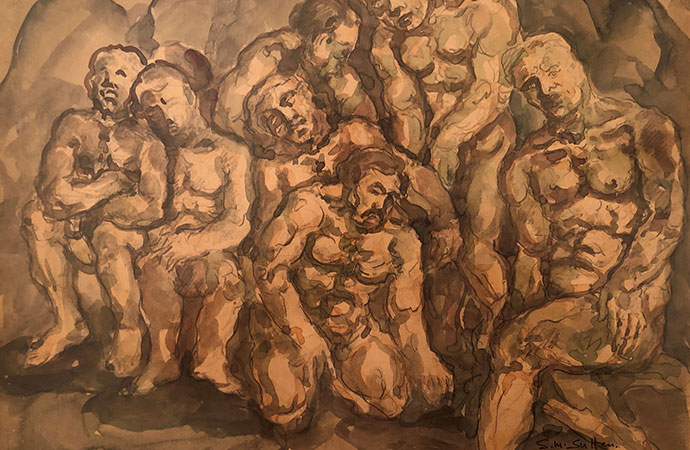 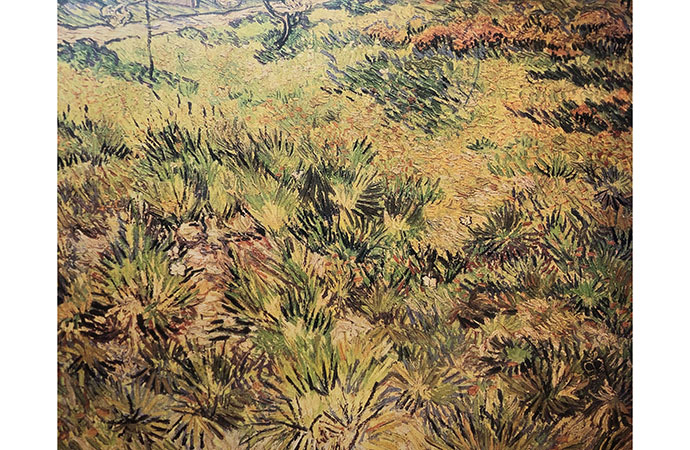 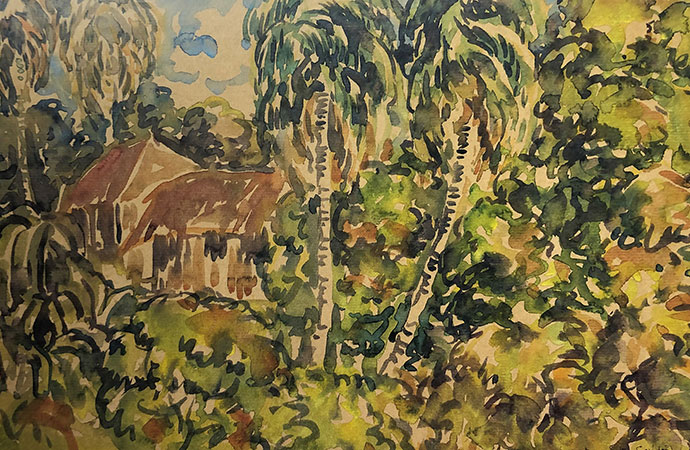 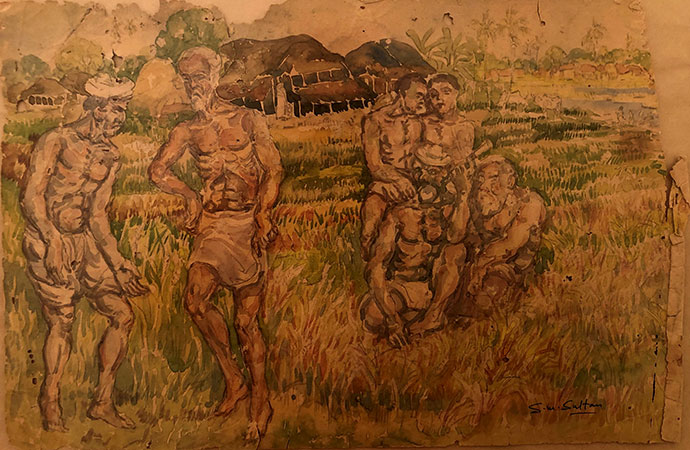 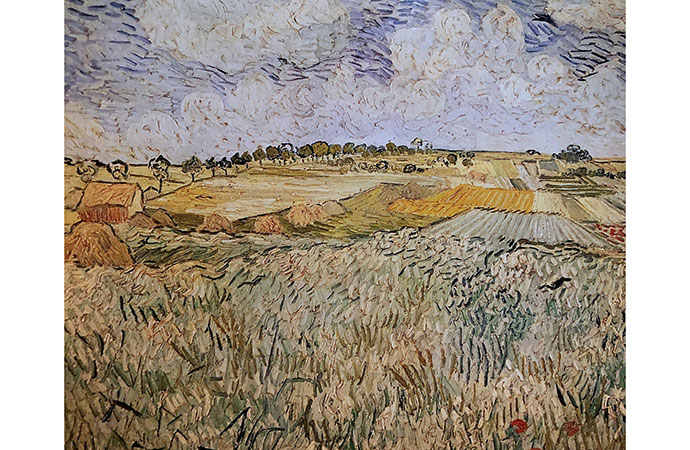 A collection of images of some of the works of S.M. Sultan and Vincent van Gogh, provided by the author to illustrate his point. Can you guess the Sultan from the Van Gogh?

I recently came across a set of rare pre-1971 War of Liberation paintings by Sheikh Mohammed Sultan (1923-1994) that were being offered for sale from the estate of Karachi based artist A.S. Nagi (1916-2006). What followed, apart from acquisition of some paintings by me, was an in-depth exploration of Sultan's extraordinary talents and my growing interest and fascination with his whimsical recluse persona and Bohemian lifestyle. I fervently read about him and studied his art wherever I could - on the net, in the books written on him and gifted to me by actor Farzana Hossain (Kongkon), and from discussions with close friends like artists Syed Iqbal (b. 1953) and Shahid Kabir (b. 1947) who knew him personally.

A chronological survey of Sultan's artistic journey will help put in perspective the importance, relevance and impact of his work on modern art in South Asia. Sultan joined the Government School of Art in Calcutta in 1941, but left after three years, without obtaining a degree. This was to be the start of a long, lonely and non-conformist life. From 1949-1953, Sultan spent time in Pakistan and India, staying in Lahore and Karachi and travelling from Calcutta to Kashmir sketching and painting landscapes. His first solo exhibition was held in Shimla, India, in 1946, followed by two solo exhibitions in Pakistan: Lahore in 1948 and Karachi in 1949. It is believed that none of his artworks from this period have survived, mainly due to Sultan's own lack of interest towards selling and preserving his work. In this regard, the SAGA Foundation with the help of its partners, and as part of its 'Archiving of South Asian artists' works program' has initiated a search for Sultan's 'lost' art which might still be languishing in some private collections and homes in Pakistan, India and Bangladesh.

In 1952, while teaching at an art school in Karachi, Sultan met leading Pakistani artists A.R. Chughtai (1894-1975), Shakir Ali (1916-1975) and Sadequain (1930-1987). In particular, he developed a very close association with Sadequain. The two were quite alike and equal in their intellect, orientation and Bohemian ways, and were often seen together in bars and cafes, drawing and discussing topics of varying interest. While Sadequain represented himself and his subjects as weak and starving 'Fakir' - an ascetic who lives solely on alms, Sultan went the other way by representing his 'Nangay Bhokay' famished peasants as strong and muscular, reflecting a larger than life image of their inner strength.

In the same year while living in Karachi, Sultan was selected amongst promising global artists under the age of 35 to receive the Rockefeller Scholarship, and to visit art galleries and museums and exhibit his work in New York, Washington, D.C., Boston, Chicago and Ann Arbor, Michigan. Later he traveled to England and exhibited in London. In a very short period, Sultan not only shared his extraordinary talents, but also being exposed to Western art movements, absorbed and assimilated those sensibilities into his own style. Some of Sultan's paintings from his exhibitions in New York and Washington are now in the Samdani Art Collection and were showcased as part of the 2016 Dhaka Art Summit.

Shunning the fame and attention he received in the West and wanting to be close to his people, Sultan returned to his native Narail in 1953, where he lived in an abandoned building overlooking the Chitra River. He lived close to the land and far from the outside art world for the next several years, with pets that included cats and snakes, developing a reputation as a whimsical recluse and a Bohemian. With his long flowing hair, he was known to dress-up as 'Radha'.

In 1967, Sultan returned to Karachi, where he lived as a house guest for extended periods with his friend and artist A.S. Nagi. This fact is noted by S. Amjad Ali in his book titled Painters of Pakistan, "The enormous amount of watercolour painting and pen-and-ink drawing that Sultan did in those days when he lived for some time in Lahore and later mostly in Karachi, is scattered in many homes. However, it is lucky that the biggest collection he left behind, is still lying with artist Nagi, whose guest he remained for long until he left suddenly barely six months before the succession of East Pakistan, in 1971." It was one of the most prolific periods of Sultan's life, as he produced a large body of work that included canvases based on his travels to Kashmir, water-colours and pen-and-ink drawings on brown coloured wrapping paper that was commonly available in those days. The paintings illustrated in this article are from this period when he mostly painted village scenes from back home with huts, covered in thickets of bamboo, coconut, betel nut and jackfruit. He is most known for painting the hard-working peasants - the labourers, farmers and fishermen and women of his homeland. The peasants were heroes to him. He described their place in his art by saying "The matter of my paintings is about the symbol of energy. The muscle is being used for struggling, struggling with the soil. Power of those arms drives the plough into the soil and grows crops. Labour is the basis and because of that labour of our farmers this land has been surviving over thousand of years."

One of the Sultan paintings recovered, circa 1968, is of peasants working in a field. Though found in an extremely fragile and feeble condition, this water colour on brown paper is a true masterpiece that incorporates all of Sultan's key influences, concerns and superior painting faculties. When studied under a magnifying glass, its details not only reveal the ease with which Sultan was able to provide depth and detail to his paintings, but also his masterly brush strokes reveal an influence of the Impressionists, and particularly their doyen Vincent Van Gogh.

Through my limited research, I have dared to compare Sultan's oeuvre and persona with that of Van Gogh's and have determined that his opus and identity is no less than that of the great Dutch master of Impressionism.

Another of the recovered paintings, circa 1967, is a study of peasants with eight Rodin-like figures done in two primary colours, gray and brown (brown was his favourite colour as it is the colour of the soil and skin). The painting is simple yet powerful. His pencil drawing in the background accentuates human muscular form and blends with the shading of colours to produce a sculptural 3D quality. Sultan is clearly influenced by the sculptures of Auguste Rodin which he may have observed closely and firsthand in the museums of Europe and America.

Mustafa Zaman, editor of Depart Magazine, in 2017 wrote on the figures of Sultan in the Daily Star "He would also re-visualise them as resistant bodies with augmented muscles to allude to their future potential. The battles he staged between the oppressed and the oppressor sought to undercut the ordeal of the masses as well as the tyranny of the oppressors."

Asma Arshad Mahmood, an artist, curator and activist based in Toronto who has followed Bangladeshi modern and contemporary art closely believes, "It is quite commendable that Sultan brilliantly replaced the emancipated bodies of hardworking peasants of Bengal with an idealistic form to make his point and raise awareness for them. And in this way, he is defiantly incorporating Rodin's form and shape in his peasants and in doing so, he may have wanted to shift the thinking of the people beyond the 1943 famine drawings by Zainul Abidin that shocked the World. It is also possible that the Paris based Bangladeshi artist Shahabuddin Ahmed (b. 1950) picked-up from where Sultan left in coming up with his valiant and muscular freedom fighters in motion to remind us of the great courage shown and sacrifices made by the Mukti Bahinis."

Dr. Deepali Dewan, Dan Mishra Curator of South Asian Art and Culture at the Royal Ontario Museum in Toronto, said "the comparison to Van Gogh and Rodin is fascinating and underscores the transnational space (variously defined) that many South Asian artists occupied in the 20th century."

Without doubt, S. M. Sultan is among the most influential artists and early pioneers of modern art in Bangladesh, along with Zainul Abidin (1914-1976) and Quamrul Hassan (1921-1988). In 2007, I had the rare and distinct pleasure of meeting the late Indian artist M.F. Husain (1915-2011) during his self-imposed exile in London and spending two days with him in his studio setup at K. Asif's Park Lane penthouse apartment. In between working on his Mughal-e-Azam series and while discussing modern art and artists from South Asia, including some of his contemporaries, he acknowledged Sultan and Sadequain to be among the greatest masters to have come out of South Asia.

Ali Adil Khan is the founder and director of SAGA Foundation and South Asian Gallery of Art (SAGA) in Toronto, Canada. He is an art critic, writer, curator and collector.

Note: No part of this article can be copied or reproduced without the written consent of the author.

How I defended Stalingrad

Trump’s use of malaria drug likely to be welcomed in ...