Artistic revelations of the plights of fishing people 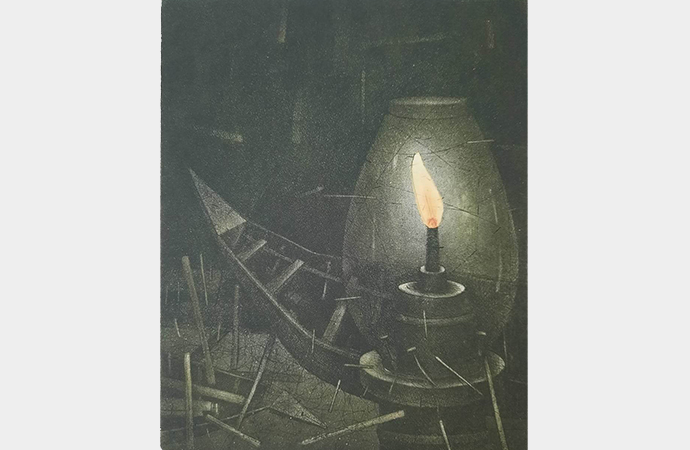 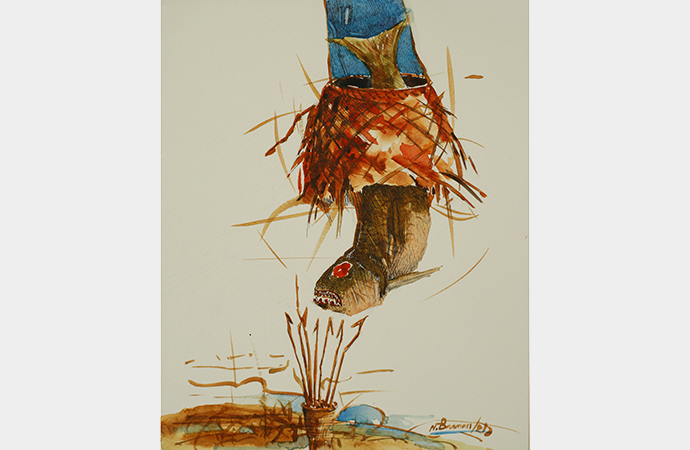 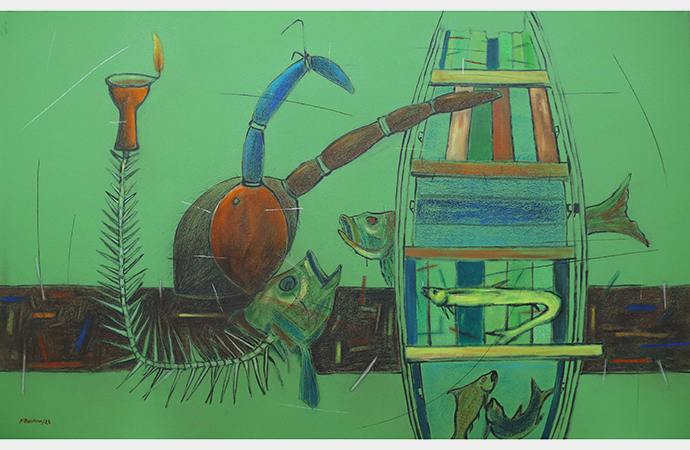 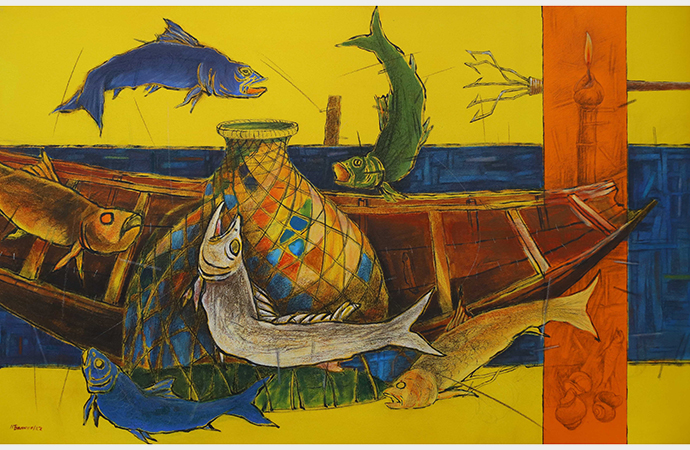 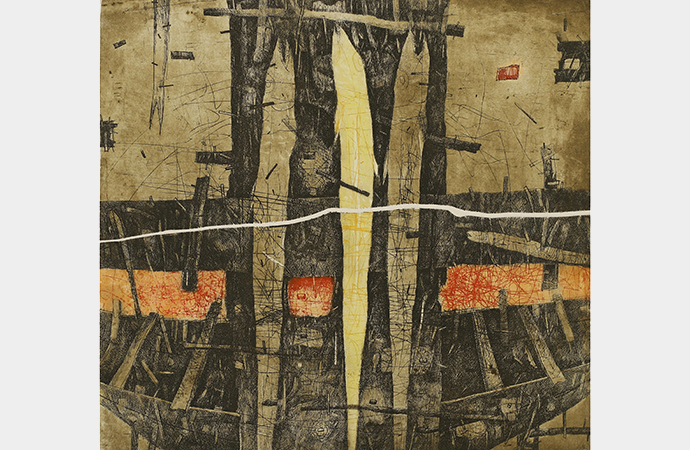 Nagarbasi Barman, born 1973, is one of the ardent painters of the late 1990s and he always tries to keep a low profile. He is very earnest about his creations, and has already formulated his personal language of art through unique uses of strong theme and technique and selection of objects. His artworks have chiefly focused on the themes of a certain community - fishermen as well as their surrounding atmospheres, their socio-economic conditions, joys, pains, ecstasies and other facets of life. He almost certainly feels within himself, having deeply observed, fishermen's lives, struggles and their ever-vacillating future prospects.

Nagarbasi Barman was born and raised on the bank of the Buriganga river. He mainly gets inspiration from the power of imagination of the fishing community which he has been nurturing in his soul throughout a large span of his life. Though he lives in Trishal, under Mymensingh district, his umbilical cord still appears to be attached to the banks of Buriganga. He still remembers a time when he used to love watching tiny fish swimming in the transparent clean waters of the Buriganga, a sight rarely found today due to the river's thick, polluted and odorous substances. During his childhood days, fishermen used many traditional instruments for their professional activities which have been lost gradually.

Barman paints fishermen's daily chores and fishing activities and he has been completely immersed with fishermen and their torments and dilemmas. As a truly socially aware painter, he is definitely noticeable for his depiction of the lives of the fishing-folk and his works eloquently articulate the harsh conditions in the fishing community. Most of his artworks overwhelmingly focus on fishes, skeletons of fishes, boats, wrecked boats, hooks, oil lamps, lanterns, harpoons, creels and fishing nets. These objects come to his works both individually and collectively. Sometimes his works also highlight the wider view of his native village and its varied aspects.

Barman's paintings and prints both have a unique quality of aesthetic value and these works are overwhelmed by the frustration and desperation exuding from them. Importantly, the artist wants us to experience the realities of the lives of the fishing community, and he also wants to give us a message that there is hope for a better future for them. Barman has meticulously used imageries of broken boats, lamps, hooks (of both usual and unusual forms), rough pieces of wood and other objects in his works to represent their dreams which, he hopes can be realised in future. The artist has been deeply saddened by their ill fates and unforgettable melancholies. He has used drawings of fishes, fishbones, fishing instruments, hookahs, lamps and lanterns as parts of his imagery and sometimes as motifs in all his works.

Incandescent lighting (of lamps and lanterns) is artistically featured in Barman's prints (that use etching and aquatint) and the artist usually prefers mystifying settings. Many of his prints in different periods has used dark and monochromatic tones to depict the dull and unchanging lives of fishermen, while the skeleton of fishes (vertebral columns, jaws, ribs, craniums and intramuscular bones) represent their scarcity and poverty. In his paintings and watercolours, the whole works have been engrossed with fishing objects and some objects have been intensely focused on for highlighting the significances of the fishing profession. His coarse line-based drawing of objects represent his individual artistic traits and he prefers using brown, blue, pale yellow, turquoise in his spacious places. It has been apparent from the details that Barman is purist in his use of techniques.

At the exhibition, the spectators will enjoy the artworks in varied mediums which have been produced in about the last twenty years. He has used the mediums -- woodcut, linocut, collagraph, etching and aquatint, watercolour and mixed media (charcoal, soft pastel and acrylic).

Barman has claimed himself as the product of the late 1990s and his integrity and honesty to his creative journey is really praiseworthy and worthy of support. He truly represents this period as evident in his working process, in-depth brooding on his topics and the approach towards overall experimentation of techniques and selection of objects (which are very much connected to his themes). It can be said that Barman intellectually selected his subject - the tough lives of fishermen and riverine people. His artistic creativities in different periods have been carried on different modes like realism, surrealism, semi-realism and semi-abstractionism. It has been obvious that he gets the meaning of life from self-experiences and observations. Over the span of decades, the artist has tried to establish himself as a devoted painter and human being.

One significant artistic feature of the late 90s is that the artists were regarded as activist painters and the group of artists started to address various kinds of social, cultural and environmental issues like a certain community's miseries, discrimination, sexual harassment, economic crisis, intimidation of women and children, deforestation, river erosion, religious zealotry, social intolerance and more. Voices of these socially conscious painters (Barman definitely fits within the group) were very similar to those pushing anti-establishment movement. Their paintings articulate their deep personal observations, experiences and understandings about the anomalies in our society. Their canvases focus on human sufferings, needs, despair and frustration. Their works are crowded with protests and tormented figures that demonstrate the unfortunate features of life. They deal with a variety of other subjects like corruption, misplaced idealism and religious bigotry.

Nagarbasi Barman is workaholic and scholarly sound. Over the years, he has been doggedly experimenting on his subject and techniques. He gives a precise explanation to his themes which in turn provides an individual meaning for his paintings and prints. The painter always feels driven to explore something novel through his subjects. It breaks boredom for him and he believes art can be enriched through experimentation. Barman is now an associate professor of the Department of Fine Arts at Jatiya Kabi Kazi Nazrul Islam University, Trishal in Mymensingh. He is also the head of his department there.

Under the title "Paintings and Graphics by Nagarbasi Barman" will open on November 11 and will continue till December 2 at Galleri Kaya in Uttara.

World leaders gather to talk climate amid many distr ...