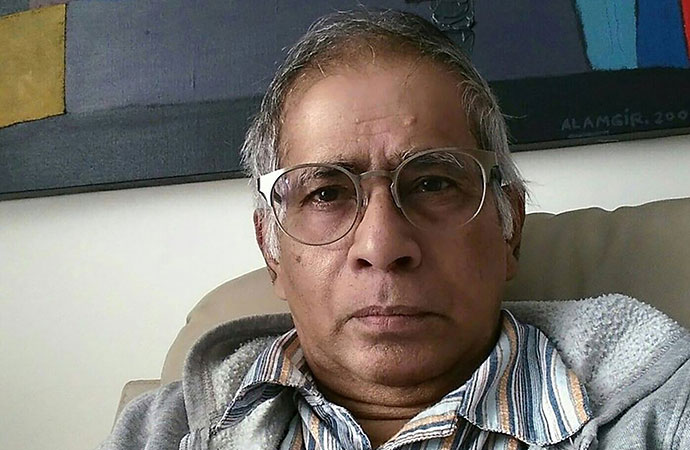 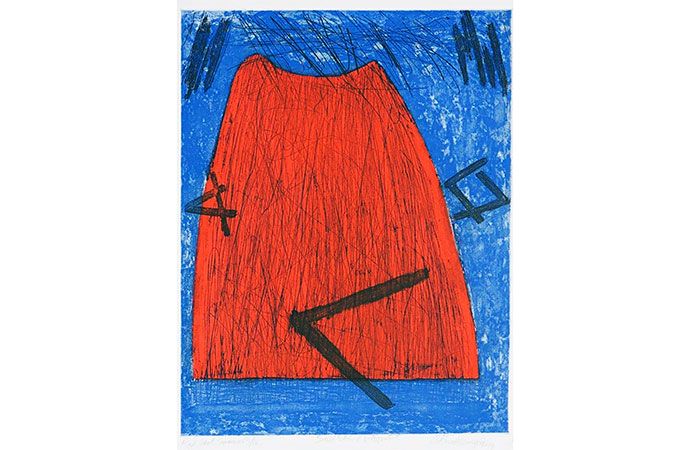 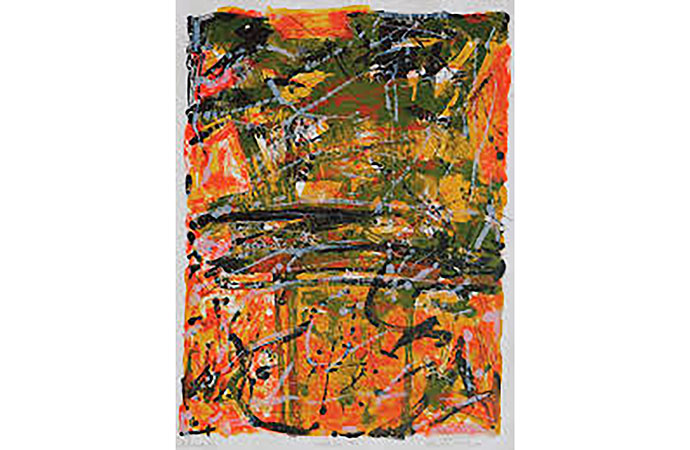 Alamgir Huque, an accomplished artist, was a familiar figure in Bangladesh art circuit of the '80s. In that period he excelled both in painting and printmaking, especially in the latter, he established a personal hallmark through the use of some unique techniques in his semi abstract works. From the beginning, Alamgir's works bore the marks of a penchant for novelty and innovation. He was born and raised in Laxmibazar, one of the historical parts of Old Dhaka, an over-populated and very congested area. The place is also recognised for its architectural heritages. His close encounter with a place where the footprints of time could be the most strikingly observed, led him to absorb these changing images of urban life, the socio-economic structure, especially the gradual spatial reconfiguration of his beloved city with the eager appetite of an apprentice. An emotive, painterly response to the exteriority of his surroundings found meticulous expressions in his early semi-abstract paintings.

With time, Alamgir continued to refine himself and harness a medley of skills, consequently, new lines, techniques, forms and different types of objects were incorporated into his works.

Alamgir suddenly left the country for Canada (Saskatchewan) in 1990. Prior to his Canada chapter, his themes ranged from nature to his immediate ambiance; political turmoil as well as weal and woe of the masses to say the least. However, his stay in Saskatchewan, triggered the artist's inclination towards nature. Air, water and soil - all natural elements - in his view remain essentially the same irrespective of places and regions, therefore nature was addressed in its uninterrupted universatality in his works.

Alamgir's two solo exhibitions (one of painting and the other of print) were held in Dhaka in 2009 and 2012 at Bengal Gallery. Afterwards, his solo collage exhibition was held at Gallery Chitrak in 2015. He has adopted collage as a medium which lends him a fresh avenue. He engaged himself with the medium during different periods of his career. He did several collages in the mid '70s. After a long hiatus, he again resorted to the medium in 1994 with a repertoire that exhibited technical excellence. Alamgir shuffles between mediums intermittently, each time returning to one with renewed interest and deeper enquiry, and each time striving to bring a novel vision to it. Last several years, Alamgir has been experimenting with varied kinds of papers and materials in his collages. He has used corrugated boards, fragments of jean, rag paper, kujo paper, various handmade papers, decorative papers, linen cloth, pieces of wood, sand paper to name a few. The medium provides an opportunity to assemble many materials and to toy with their effects on paper. Collage in the modernist sense began with cubist painters Georges Braque and Pablo Picasso. Picasso was the first to use the collage technique in oil painting. Braque took up the concept of collage before Picasso, applying it to charcoal drawings. Surrealist artists have also made extensive use of collage. Alamgir's collages are meticulously executed and have opened a new window of visual experience for the viewer. He is very much precise and balanced in his use of acrylic shades and molding pastes. Acrylic provides more flexibility and creative freedom than any other type of paint. The molding paste has added textured relief to many of his collages and has helped create thick impasto layers, especially when it intertwines with other stuffs. Many of his collages provide a translucent look as molding pastes are water-based and non-toxic by nature.

Besides being a good painter, Alamgir is also a good craftsman, if you may. He has experimented with techniques and materials and brought them to a happy osmosis on rag paper. Sometimes it seems he is more conscious about space and forms. The forms lend a contemplative quality to his works. Presently, in his works forms synchronize consciously with colours, spaces and compositions in a somewhat cognitive prefiguration. Alamgir portrays nature and its mysterious phases through his personal notion, experience and thought process. The abstraction in his works comes naturally as he has adopted a unique language for his own way of expression. His collages are chronicles of his inner feelings and intense observation of his living space, life and reminiscence. His manipulation of forms, scattered drawings and rough brush strokes create a language simultaneously natural and contrived. His palette swings between mellow and bold, strokes between rugged and controlled conjuring up a visual playground for joy and ecstasy.

Many of his papers, which have been used in his collage, are in different sizes like rectangular, vertical, horizontal, oval, half-curved and oval-curved. The artist has brought many symbols into his collages. Space division in his compositions is dramatic; with big spaces kept flat while smaller areas have several tiny patterns. It is obvious that the artist has spent a considerable time to create the illusion of space.