The Bay of Bengal and Bangladesh: Potentials of Blue Economy lucre vs. looming ecological disasters 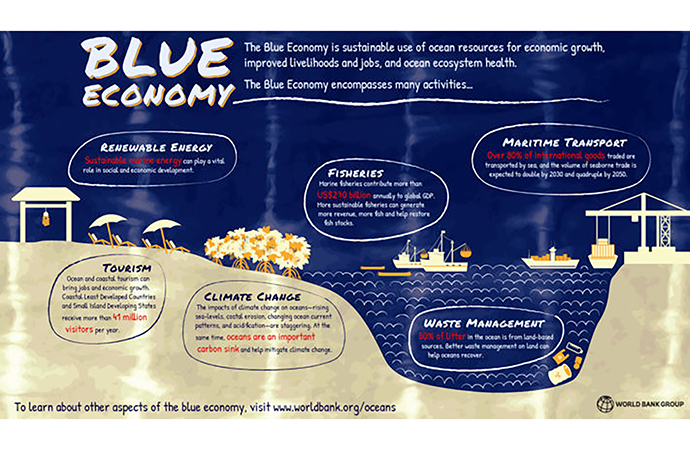 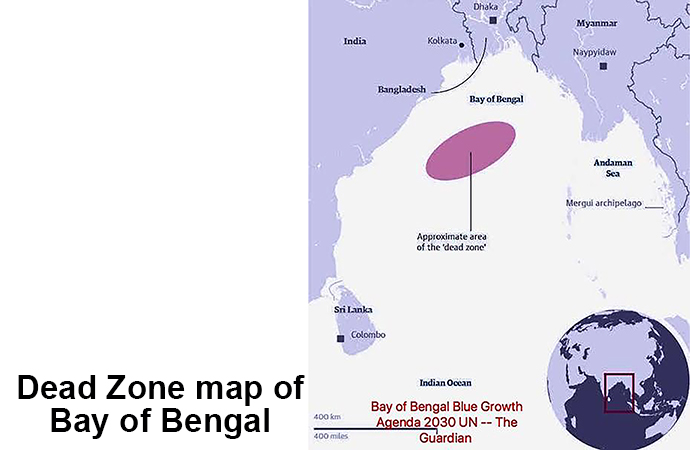 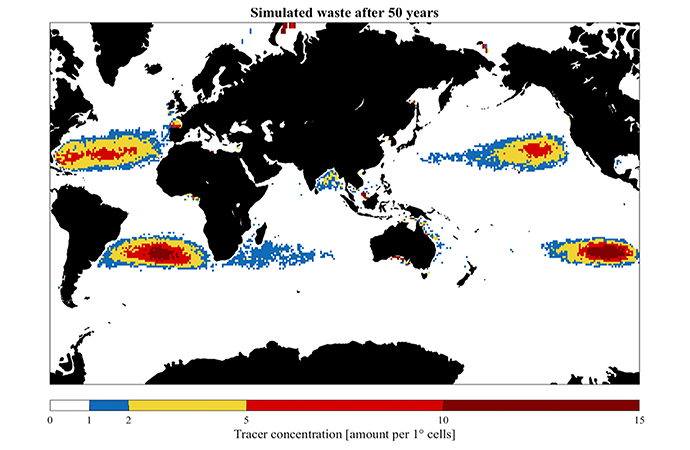 The World Bank defines the Blue Economy as the "sustainable use of ocean resources for economic growth, improved livelihood and jobs, and ocean ecosystem health". The blue economy for Bangladesh would encapsulate a large number of economic functions and activities, very importantly fishery (for domestic food and global exports), maritime trade and shipping (including coastal shipping and sea-borne feeder services), energy (oil and gas exploration and development), tourism (eco, history and pilgrimage), coastal protection (from advancing salinity and destructive high tidal surges), maritime safety and surveillance (against hostile non-state actors) for economic development.

Bangladesh has been among the forefront of the most proactive among the Bay of Bengal littorals to develop the Blue Economy. Bangladesh has 710km long coastline with 200 nautical miles of exclusive economic jurisdiction. The Bay of Bengal has at least 500 varieties of different fish beside snails, shellfish, crabs, sharks, octopuses and other marine animals. At present estimates, Bangladesh harvests only 0.70 million tons of the Bay of Bengal's estimated 8 million tons potential. With gas and oil potentials, Bangladesh could extract resources worth about 1.2 billion dollars. It has about 75 outer islands that could be developed for domestic and foreign tourism. It is constrained on building more meaningfully and substantially on this modest base at present by the lack of adequate advanced technological skills and oceanography mapping and research capacity.

The Bay of Bengal contributed over $6 billion to the Bangladesh economy in 2014-15. Tourism and recreation accounted for 25%, followed by marine fisheries and aquaculture at 22%, transport at 22%, energy at 19%, ship and boat building and breaking at 9%, and minerals at 3%. The fishery sector employs 17 million people of Bangladesh. At present, mechanized boats and industrial trawlers can catch fish up to 70 kilometers from the shoreline out of the total of 660 kilometers available. The rest of the area remains untapped, so vast potentials exist for gearing up technology and expanding capacity. Bangladesh still lacks the capacity or ability to harvest fish beyond 100 meters depth or develop 'mariculture' - i.e., cultivation of an enclosed section of the ocean for seaweed, macro algae, mussels, clams, oysters and pearly oysters, sea cucumbers and sea urchins etc., or in tanks, ponds or conduits filled with seawater. According to some preliminary estimates, Bangladesh could conceivably harvest around a trillion dollars from its blue economy. However, while it is always gratifying to look forward to such lucrative potentials, one must never forget the looming ecological challenges that could completely upend all our rosy dreams and high aspirations.

The vast global commons comprising the world oceans and seas are not only resource-rich with huge potentials for enhancing human well-being, they are also an increasingly fragile ecosystem that require rational and proactive management and nurture. Viewing the Blue Economy, anywhere, while increasingly becoming a function of money and economic development, is also equally increasingly subject to neglect and damage of its ecosystem by the humans who depend on it so much for livelihood and sustenance. This Bay's ecosystem was held together historically by a delicate equilibrium defining interaction between humans and nature, humans and other species, between other species themselves, and between humans, fauna and flora. Policy makers and business concerns, while salivating at the prospect of reaping billions, or indeed trillions of monetary worth from extraction of the blue wealth of these oceanic waters, tend to ignore the dangers to these commons that could very well kill the proverbial goose that lays the golden eggs. Bangladesh, and indeed all Bay of Bengal littorals, therefore, need to take note of the dangers that are already progressing through a process of creeping annexation into the domain of the Bay of Bengal and could have seriously deleterious consequences for the health and well-being of the living creatures that inhabit the Bay region, as well as also translating into ungovernable strife.

Apart from the traditional threats that exist (unchecked poaching on Bay of Bengal waters by non-Bay of Bengal countries) or that could arise (piracy, either related to or not with various forms of smuggling - humans, drugs, arms and other contraband), there are ecological and environmental challenges that should be cause for alarm. Three important and immediate cause of concern are: (a) the development of a dead zone in The Bay; (b) the growing threat to the depleting mangrove forests that act as a force-shield against the ravages of nature; and (c) the increasing accumulation of non-degradable plastic waste. The nature and causes of the first two (whether entirely natural or triggered by anthropogenic activities) need immediate attention and deep research. The third danger is entirely man-made, and could, if left unaddressed, develop into an existential threat for species survival.

The Dead Zone in the Bay of Bengal

"Dead Zones" in oceanic areas are caused by excessive nutrient pollution from human activities, combined with other natural factors. Quite large such dead zones have been known to exist in the North and South Atlantic Oceans and the Pacific Ocean for quite some time. Discovery of such a zone in the Bay of Bengal is relatively a recent phenomenon. They tend to occur near inhabited coastlines where aquatic life is most concentrated, so anthropogenic contribution, wittingly or unknowingly, may be a contributary causative factor, and deep research is required to understand its causation and determine how to reverse, or at least contain it. These zones support microbial processes that remove from the waters vast amount of nitrogen, a key nutrient for life sustainability.

The Bay of Bengal has a 60,000 sq. kilometers Dead Zone, occupying water depths of between 100-400 meters. It is still an enigma and considered by scientists as being at a tipping point that could adversely affect not just our individual and collective wellbeing but perhaps also have harmful impact on other oceans.

Bangladeshis take pride in these forests. These forests are very important for our economy, climate, human lives and livelihoods and for preserving our rich biodiversity. The Sundarbans nurture 334 species of plants and 269 species of wild vertebrates and is currently thought to be among the last habitat of several important megafauna including the Bengal tiger, Gangetic and Irrawaddy dolphins and saltwater crocodiles, several threatened bird species and numerous fish species. Of critical importance to such a very densely populated nations as ours, they are an indispensably protective natural force shield against natural elemental forces of destruction such as cyclones and tidal bores. Bangladesh is frequently visited by such natural assaults, and but for the presence of this invaluable natural barrier the damage to human lives and habitats, livestock, properties and agriculture from recent onslaughts like Cyclones Sidr (2007), Nargis (2008), Aila (2009), Fani and Bulbul (2019) and Amphan (2020) would have been much worse. Additionally, anthropogenic activities pose great threats to these invaluable commons. Significant loss of mangrove forest areas has already been recorded in Southeast Asia. Such forests used to be extensive in Myanmar bordering the now Rakhine state, but have been noticeably reduced there, and they survive only in Irrawaddy delta and Taninthari state. The mangrove belt along Arakan coast have been vastly reduced or are disappearing. Bangladesh itself is estimated to have lost a sizeable chunk of the Sundarbans forests in the span of the last 100 years. Whether such attrition has been caused by natural causes or are the cumulative result of industrial and agricultural run-offs, conversion of forests areas to arable land for growing commodity and cash crops (rice, palm oil), or over-exploitation through legal and illegal logging activities, human encroachment (including reclamation for coastal cities and beaches), shrimp farming and other forms of aqua culture need to be delved into and determined. In Bangladesh, anthropogenic impact on mangroves is said to have accounted for 73% negative impact on covered acreage since 1960s. We need to consider and determine the diversity of drivers of mangrove deforestation urgently. Research and the scientific knowledge gained from it needs to guide policy-interventions at sub-national, national and regional levels, not just for economic exploitation and merely commercial needs - in fact the result of such research would enable policymakers to ensure sustainable harvesting of wealth while preserving the delicate balance in the ecosystem for our progeny.

The growing menace of marine plastics

Humans produce nearly 300 million metric tons of plastic every year, 50% of which is for single use. Well over 8 million metric tons of this plastic waste, generated globally, end up in our oceans annually, of which around 236,000 metric tons are microplastics, tiny pieces of broken-down plastics smaller than the size of our fingernail. Microplastics fragment further into nano- plastics that get easily mixed with normal food of marine life and get ingested by them - so ultimately, they travel back into the human food chain with deleterious consequences for human well- being. It is estimated that over the last ten years we have produced more plastic than during the whole of the last century.

The UN Joint Group of Experts on the Scientific Aspects of Marine Pollution (GESAMP) estimates that land-based sources account for 80% of the world's marine pollution, of which between 60-90% comprises plastic debris. This waste accumulates over time at the center of the vortices of ocean currents, forming huge garbage patches of floating debris. Plastics in the ocean have been found as far as 11km deep. Plastics will not biodegrade for long (estimates range from 450 years to eternity). By migrating to the oceans, they are said to have already formed 24 million sq. kms of "plastic soup" in different parts of the world's oceans. Plastic waste, therefore, cumulatively, pose an existential threat to all life on earth as we know it today.

Significantly, about 90% of global riverine input of plastic wastes originates from Asia. Just 5 countries in Asia: China, Indonesia, the Philippines, Thailand and Vietnam, produce 50% of this global plastic waste. South Asia follows closely behind, but no detailed or comprehensive computation has been done to date. India generates 26,000 tons / day. Bangladesh produces 3000 tons a day.

However, and this has serious consequence for us in the Northern Indian Ocean. There is evidence of a developing accumulation very clearly discernible in the Bay of Bengal. As will be evident in the map above, global simulation of the extent of such marine plastic waste accumulation presents an alarming scenario for us within close to half a century. Unchecked and unaddressed, as a result of this looming menace we could very well end up eating fish with largely plastic composites ingested and absorbed by them.

It becomes incumbent, therefore, not just on Bangladesh but on all Bay of Bengal littorals to converge together and draw up a coordinated plan of collaborative action to address this marine plastic menace that threatens the lives and future of their progeny.

Ambassador (Retd.) Tariq A. Karim is the Director of the Centre for Bay of Bengal Studies at Independent University, Bangladesh. He was a Distinguished International Executive in Residence at the University of Maryland. He is now also Honorary Advisor Emeritus, Cosmos Foundation.

Man on a mission