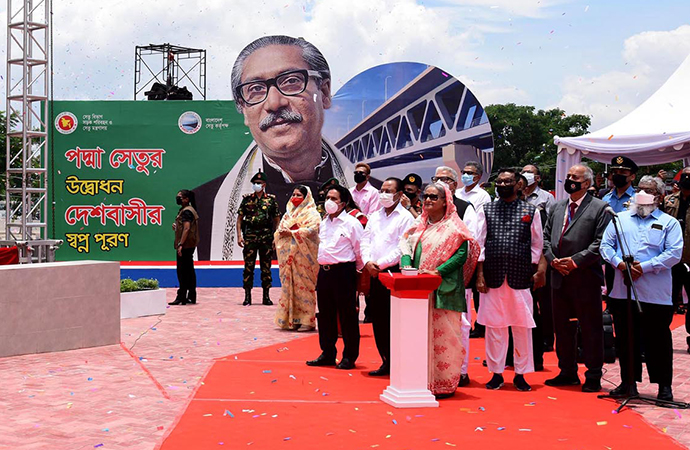 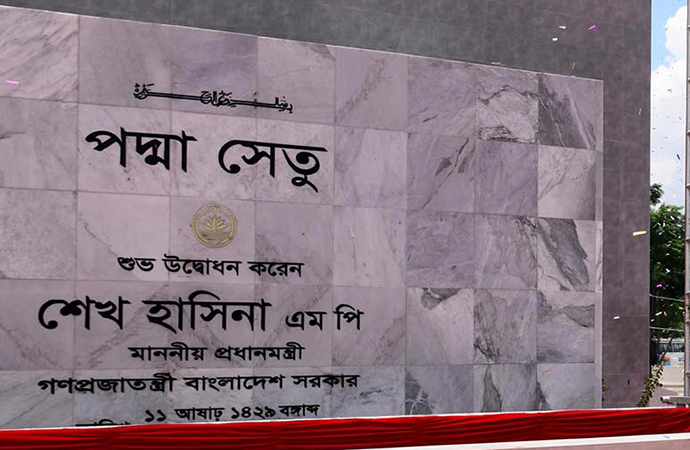 Bangladesh wrote another golden chapter in its history on Saturday when Prime Minister Sheikh Hasina opened the Padma Bridge turning the nation's dream into a reality.

A jubilant nation cheered the prime minister as she unveiled the plaque and mural-1 at Mawa end of the 6.15-km bridge, the longest such infrastructure in the country built with own funds, at around 12 pm.

As the country woke up on a weekend holiday millions glued to their TV screens to watch the live telecast of the grand opening ceremony.

The premier became the first citizen to pay the toll and cross the bridge that majestically arched over the mighty river.

To mark the historic moment, she unveiled commemorative postage stamps, souvenir sheets, opening day cover and seals and a note of Tk 100 as part of the grand opening of the country's biggest self-financed mega project.

A munahat was also offered.

With the inauguration of the bridge Bangladesh made a bold statement that the world can no longer ignore this emerging power.

The bridge has connected directly the country's 21 south and south-western districts with the capital, which is expected to accelerate the GDP growth by 1.23 per cent and make an outstanding contribution to socio-economic development by alleviating poverty at the rate of 0.84 per cent per annum, according to official estimate.

There is immense importance of this bridge for the multifaceted development of the otherwise underdeveloped south and south-western region.

It opens new opportunities for the development of the region, especially in agro-based industries and tourism.

The Padma Bridge will play a significant role in harnessing the agricultural and fishery resources of the riverine-coastal area and in rapid marketing of the resources throughout the country.

The 'Padma Bridge' is expected to utilise the full capacity of Mongla seaport, Payra seaport Rampal Power Plant, Payra Power Plant and other large projects, being implemented by Sheikh Hasina-led government in this region.

The cross-border trade through important land ports located in this region like Benapole, Bhomra and Darshana will increase. The bridge has installed the connectivity of electricity, gas, optical fiber and other utility services between the two sides.

On July 09, 2012, PM Hasina at a cabinet meeting announced that Bangladesh would construct the Padma Bridge with its own funds after the World Bank withdrew from the project on allegation of unproved corruption conspiracy.

Later, the graft allegation was rejected by a Canadian Court as false and baseless after the World Bank filed a case in this regard.

Since the start on December 12, 2015 the work on the bridge continued unstopped despite the Covid-19 pandemic situation and Holey Artisan tragedy.

Besides, the Tk 9,400 crore was allocated for river training works, Tk 1,907.68 crore for approach roads (including two toll plazas, construction of two buildings for police stations and three service areas), Tk 1,515 crore for the rehabilitation of the displaced people (caused by the project) and Tk 2698.73 crore for land acquisition.

In 1998, the Awami League government had taken the initiative first to build the Padma Bridge and PM Hasina laid the foundation stone of the Padma Bridge on July 4, 2001. She inaugurated the construction of the main bridge on December 12, 2015.

Bangladesh signed an agreement with a Chinese firm - China Major Bridge Engineering Company on June 17, 2014 for construction of the bridge.

The first span of the bridge was installed on September 30 in 2017 while the last span (41st one) was installed on December 10, 2020. The two-storey bridge is 22 meters wide and has four lanes.

In May, 2016 ECNEC approved the Padma Bridge Rail Link Project. On October 14, 2018, the Prime Minister unveiled the plaque of Padma Bridge at Mawa end and opened work on Padma Bridge rail link project.

The Padma Bridge is expected to last more than 100 years, but its construction cost will be recovered in the next 35 years.

1.
Not the end of the road
2.
From the Editor-in-Chief: If the hills could talk
3.
Sheikh Hasina on Bangabandhu
4.
Brig. General Jamil: A profile in duty and courage

Aftershock in Afghanistan as quake toll rises to 1,1 ...