Not the end of the road 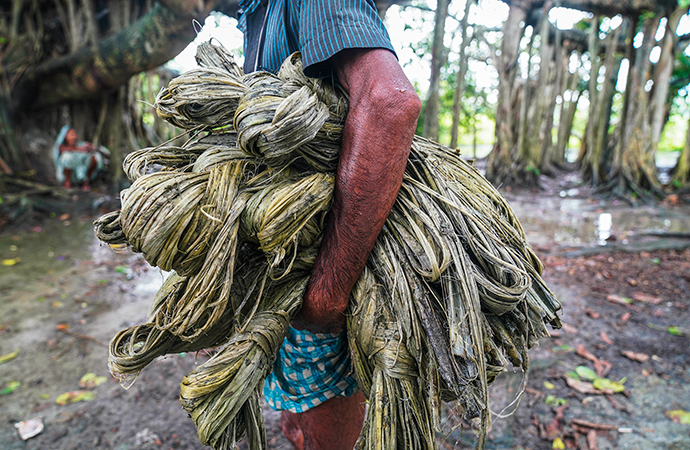 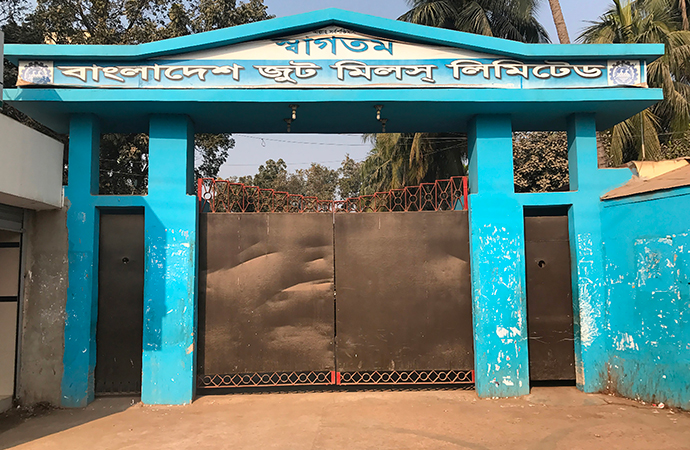 The decision to shutdown production at 25 state-run jute mills under the Bangladesh Jute Mill Corporation (BJMC) by providing 100 percent dues of some 25,000 workers of the mills under a golden handshake should probably not have come as a surprise to most people, given the well-documented inability of the mills to operate with any degree of commercial viability over the years.

The decision came at a meeting held with Prime Minister Sheikh Hasina in the chair at her residence Ganobhaban on June 24.

"Our BJMC can't be viable competing with the private sector. These 25 mills can't run properly. So, some 25,000 workers of the mills have been sufferings as they are not getting salary and dues in time ... So, the Prime Minister announced the shutdown of production of the state-run jute mills," said PM's Principal Secretary Dr Ahmad Kaikaus while briefing reporters at the Prime Minister's Office.

He said cent percent dues of workers of the jute mills would be given at the quickest possible time and it would require Tk 5,000 crore. "The workers will be given their dues in line with the national wage structure of 2015," he said. He said the 25 mills will be reopened refurbishing these with modern technologies under different types of ventures --PPP, G2G, joint venture or lease model.

"The Prime Minister gave directives to place a proposal before her soon on how the closed jute mills can be restarted and can survive competing with local and international markets," he said.

There are now 26 jute mills under BJMC, but the decision regarding one mill -Monowar Jute Mill-was not taken as there is case over the mill, said Textiles and Jute Secretary Lokman Hossain Miah at the briefing.

The Principal Secretary said the Prime Minister is always against the shutdown of any mill and factory and she reopened many closed mills during her tenures. "The Prime Minister became emotional while giving her consent. But the reality is that these 25 mills can't run properly and the normal life of the workers concerned have been hampered," he added.

Noting that the demand of jute is on rise across the world, he said the PM financed the research over the genome sequencing of jute and promotes the multipurpose uses of jutes.

"The Prime Minister took the decision for the sake of the greater interest and the interest of the workers," he said.

Talking about payment procedures, the Principal Secretary said the payments will directly be sent to the bank accounts of the workers. The Prime Minister has directed the officials concerned to prepare the list of workers of the state-run jute mills within three days and send their dues directly to their bank accounts, he said, adding that BJMC has started process of enlisting the workers.

Dr Kaikaus also said that all the dues of 8,956 already retired workers of the jute mills would also be given for which Tk 1,020 crore (out of Tk 5,000 crore) will be provided in this regard.

The Prime Minister gave a directive for taking training programme for the workers of the mills for the development of their skills so that they can get jobs in the private sector. PMO Secretary Md Tofazzal Hossain Miah and high officials of the Textiles and Jute Ministry were present at the briefing.

The minister came up with the remarks while attending an online meeting over BJMC and said "Later, it will be modernized according to the demand in local and international market."

Around Tk 5,000 crore will be provided from the government budget over the matter of paying off workers' dues, and all arrears of 8,954 workers who retired since 2014 will be paid, he said, adding that all the overtime dues, provident fund, and gratuities will be paid to the present workforce numbering 24,886.

"The mills will be initiated to resume in lease model/G2G/joint venture/ PPP under the government control where all terminated workers will be appointed on priority basis and new employments will be created," the minister further said.

In the private sector monthly wage was Tk 2700 that was raised to Tk 8,300 in BJMC mills after implementing the Production and Wage Commission-2015 which has hiked the per unit production cost by 60 to 63 percent, the minister said.

The increased production cost disrupted competition in market and fixing rate of jute products by private sectors, he said adding that "India has imposed anti-dumping tax on importing Bangladeshi jute products for selling them in lower price which also enforced negative impact on overall exports."

Currently, the government has been paying huge subsidy to keep the mills under BJMC going, Gazi said.

The production capacity of the state owned mills has come down to zero as the machines are 60/70 years old, he said, adding that "Besides, old management structure is also not suitable under present modern technology-based production system."

And what of the workers?

State Minister for Labour and Employment Munnujan Sufian requested the workers to accept the closure of the mills, along with the so-called 'golden handshake' for workers, peacefully.

She came up with the request in a meeting with leaders of jute mill workers who had arrived at Srom Bhaban to meet her, one day after Textiles and Jute minister Golam Dastagir Gazi spoke to the media. In future, the mills may reopen under the PPP model, or completely under private sector management.

Munnujan is the widow of Professor Abu Sufian, a prominent labour leader and freedom fighter who was gunned down by assailants near Minakkhi Cinema Hall in Khulna city. She entered into labour politics a few months after the tragic death of her husband.

She went on to head a number of labour organisations in her constituency before joining electoral politics prior to the 2008 election, even campaigning on a platform that she would try to reopen closed jute mills and reinstate sacked workers. After AL won the election, she was appointed State Minister for Labour and Employment in early 2009, and so has been at the centre of the jute workers' fluctuating fortunes through three successive governments led by Sheikh Hasina.

Prime Minister Sheikh Hasina has taken the decision for welfare of workers and the industry, she told the workers fathered today, adding that "Workers should accept it peacefully and help the government to implement the decision."

"The mills will be reopened through lease model/G2G/joint venture/PPP, where all terminated workers will be appointed on priority basis and new employments will be created," the State Minister said.

All arrears of 8,954 workers who retired since 2014 will be paid, she said, adding that all the overtime dues, provident fund payouts, and gratuities will be paid to those getting laid off no, numbering 24,886.

The closure of BJMC mills has often come up over the years. Two years ago, Finance Minister Abul Maal Abdul Muhith said the BJMC should be shut down and a jute cell opened in the ministry instead.

"In the present situation there is no place for Bangladesh Jute Mills Corporation (BJMC). It should be shut down fully and there can be a cell on jute at the ministry. I officially told them (the ministry) but they don't oblige. They are under the grip of BJMC," the minister said while unveiling a publication - Proyash-2018 - at the Secretariat.

Referring to the comment of the state minister, Muhith said "It's his (Mirza Azam) personal opinion. The government is trying to revive the jute sector. Since the beginning of BJMC, we have invested several thousand crores in jute sector and now we're spending Tk 4 billion to 5 billion each year," said the then-finance minister.

Various stakeholders and civil society organisations expressed concerns with regard to the economic judgment which led the government to close down the jute mills and retrench workers at a time when it was widely believed that resurgence of jute was emerging in both global and domestic markets. This along with the return of the political government through elections in 2009, combined to undo these plans and some of the closed mills were once again reopened under AL. The jute workers unions still held close ties to AL, as illustrated by the case of State Minister Munnujan Sufian.

It has long been alleged that there is no accountability in BJMC in the matter of jute purchase. It is also alleged that wet raw jute is purchased deliberately to add extra weight and price manipulation is also part of the game. "Unless monitoring and accountability is ensured, one can forget about profitability of the BJMC mills," wrote economist Syed Jamaluddin in 2015.

BJMC officials blamed the falling productivity of machineries and higher wages than their counterparts at private mills for the spiralling production costs.

There are 130 jute mills in the private sector. Although these mills have a number of problems they do not come to the government for financial support. They have urged the government to provide bank loans to all jute mills at favourable interest rate.

In 2010, the corporation implemented the government-announced national wage scale for workers in state-owned mills, which was - higher than that of private mills. Under the 2010 wage scale, it had to pay Tk 4,150 as minimum wage, in contrast to Tk 2,700 at private jute mills. Then the scale got updated again.

The eventual closure of the mills now is an admission of failure on the part of whatever attempt there was to take advantage of any opportunities presented by international conditions shaped by jute's climate friendliness, and through whatever means to revive the jute mills.

As recently as 2019, important experts like CPD's Khondaker Golam Moazzem, were advocating that BJMC "should gradually reduce its operations". Dr Moazzem has also welcomed the latest step, saying "the decision to shut down production at state-owned jute mills would boost the jute sector remarkably."

There may be other uses too for the vast jute mill properties, as the example of the former Admaje Jute Mills shows. In 2002, the then-government led by the BNP closed down the country's first and the largest state-owned Adamjee Jute Mills to cut increasing losses. Adamjee Jute Mills, established in 1950 on the banks of the Shitalakshya in Narayanganj under private management with active state assistance, also used to employclose to 25,000 workers at the time of its closure. The government earmarked Tk 300 crore for the 'golden handshake' programme.

Today, it is a thriving export processing zone, Adamjee EPZ, set up on over 200 acres of land that used to house the iconic Adamjee Jute Mills, generating 62,200 jobs as of 2018-19 data.

Dr Moazzem believes that developing the jute industry through the private sector is "the right step", as the public sector jute mills had long been distorting the market and discouraging increased private sector investment.

"Though late, the decision on shutting down production will help private jute mills to grow," Dr Moazzem said in comments to the media.

Let us hope he is right.

From the Editor-in-Chief: The spectre of systemic co ...