Puja attacks: Law and order is half the problem 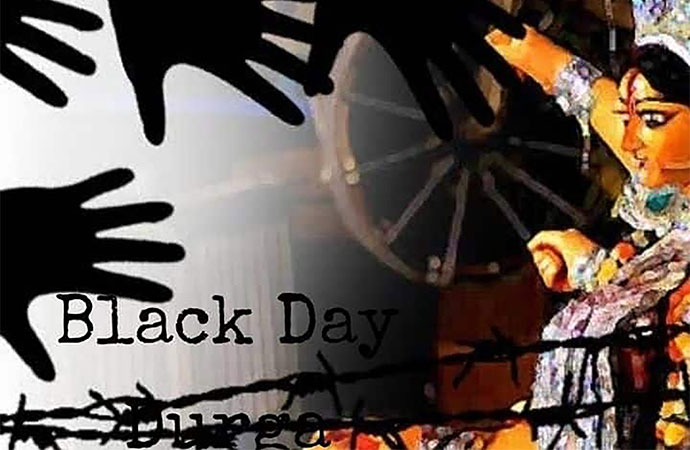 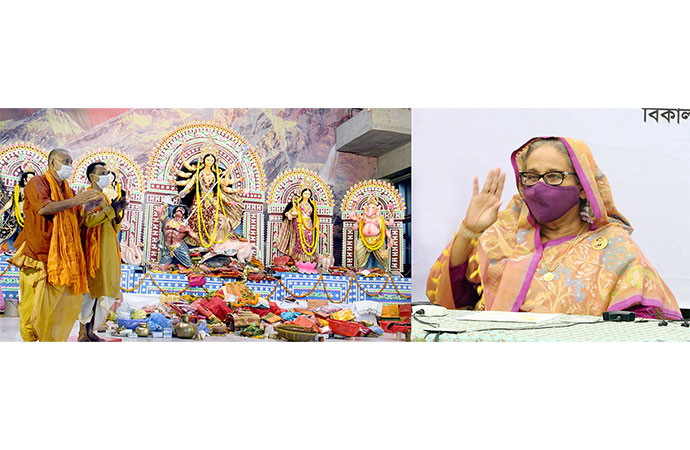 “We have already taken proper measures (against ransacking of Hindu temples).” Prime Minister Sheikh Hasina made the comment while exchanging greetings with leaders of the Hindu community being connected virtually with the Dhakeshwari National Temple marking the Sharodia Durga Puja from her official Ganabhaban residence here. Photo: PID

The attack on Hindu puja mandaps is becoming regular in Bangladesh. This time it was shockingly extensive causing several deaths. It occurred in different parts of Bangladesh with Chittagong, Noakhali and Rangpur as the main flash points. Death count is still uncertain but at least six are confirmed.

The rapidity and ease with which this round has hit makes many think that the killers and vandals felt safe as they attacked. Thus, a sense of social tolerance of such violence and perhaps even a reluctance to handle the matter more firmly by the law enforcers contributed to the latest round of mayhem. The police have however said that they did their best but it happened despite that.

The situation went beyond the control of the law enforcers quite rapidly and by their own admission did so despite vigilance. Why the authorities including the police were ineffective in their efforts to prevent the sale up of violence has now become a serious issue. If the police can't handle such sensitive matters, there is cause for serious worry. Who will then?

The scale of violence was much higher during Modi's visit to Bangladesh but it was not directed against a victim group for crimes not committed. The police seemed a bit held back initially but ultimately did crackdown after crowds attacked the police station. Subsequent action by the police was quite extensive and practically disabled Hefazot as a crypto political force. They look much more uncertain now.

Violence against the Hindus was largely social and the victims were not battle ready as the Hefazot was. The mobs were lumpen and disorganized but in the end they got away till public pressure grew and law enforcement action grew former.

Given that it's no secret that snooping is all pervasive, it's incredible that all of this was missed. Some planning did go behind the attacks even if there were spontaneous crowds. Why did the police not know remains a mystery. The violence prevention mechanism failed to deliver and nor did the violence countering actions.

A week after the mayhem, police looked at the CCTV footage and claimed to have identified the person who placed the Quran at the mandap that began the trouble. Does it mean, the police didn't check the footage from a nearby zone this long till now? Isn't that what police do immediately, which is to look for the CCTV footage all around. But the police haven't yet given any info on this.

In Rangpur, police saw the incendiary stuff on social media and reached the place on time to keep the alleged social media poster safe, but the angry crowd torched the rest of the village. Why this wasn't anticipated given what is happening all over Bangladesh.

The police have now apparently arrested 450 + and filed 72 cases but as always, action after the damage is done points to a serious lack of capacity of preventive action which in such cases are more important than arrests.

After Naseernagar, the suspicion will never go away that local political interests played a role in igniting the mayhem. They did at that time and though it was never exposed, the vulnerability of ordinary people to the whims of the powerful are exposed. No such rumour has surfaced strongly yet but some are saying that low level ruling party rivals may have started the conflict which later went out of control. However, no concrete evidence is in yet so let's wait for any police report or media report that is credible.

The social factors and responses point to deep fissures that are being ignored. The idea that no social protection for the vulnerable exists is obvious. Mobs dared to attack because it was possible. Horrifying provocative posts continued to appear as the attacks were on and protests were ignored. Law enforcers and authorities didn't take it seriously enough till Rangpur came into the scene. It means that an incendiary situation is always there and all it needs is a spark to trigger violence.

Social media as always plays the facilitating role. In this case it was no different. Political Opposition has said that the Government was trying to use the incidents as an excuse to clamp down on social media. That it is so isn't known but the misuse of social media including what leads to murderous violence can't be ignored either. How does one prevent this from happening again is the question.

Social media has become a space to abuse and excuse and how one can make it safer for the vulnerable must be identified. We need a safe social media policy and the inadequacy of the Digital Security Act as a deterrent of all that is bad as the law claims has been proven wrong once more. Whether Ramu or Rangpur, it doesn't matter, the victims suffer. And nothing happens after the episode is over.

Bangladesh has to take the matter more seriously than it did because the problems go beyond borders. There were demonstrations in India and demand for UN forces for intervention. Muslim Bangladeshis are full of criticism and some are into self-loathing but they don't help.

Bangladeshi activists of the Hindu community have lashed out much more than before which shows that social harmony has declined rapidly. It won't solve the problem. It means tackling the socio-economic forces of violence not just through law and order actions but conflict resolution activities. One has to accept the reality that in no South Asian country are minorities safe but something has to be done to prevent violence of the kind we have seen.

That means a much better law and order prevention and management capacity along with those actions that promote social cohesion. Such actions don't work as miracles but it works a lot if done seriously and expresses the will of the state better than expressing sorrow and arresting criminals after the damage is done.

A writ petition was filed with the High Court on Monday challenging th ...

Chinese Foreign Minister Wang Yi has stressed that the principle of no ...