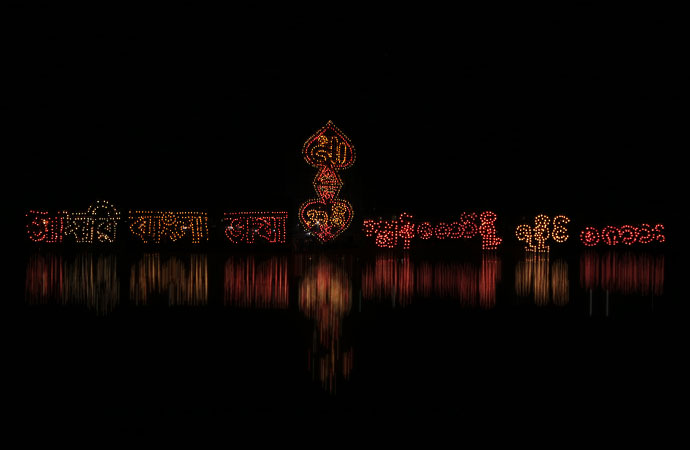 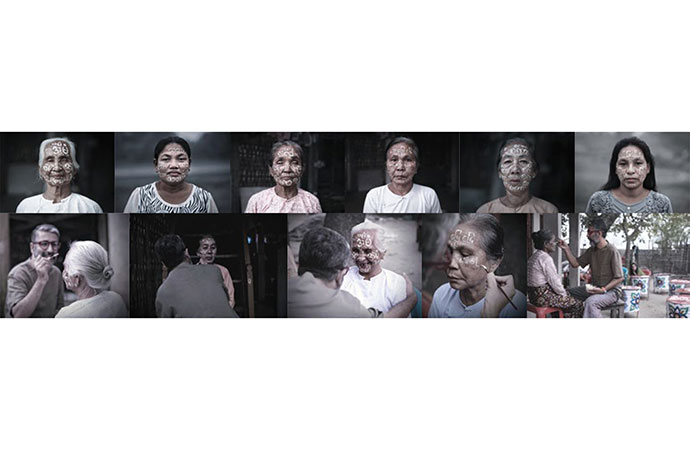 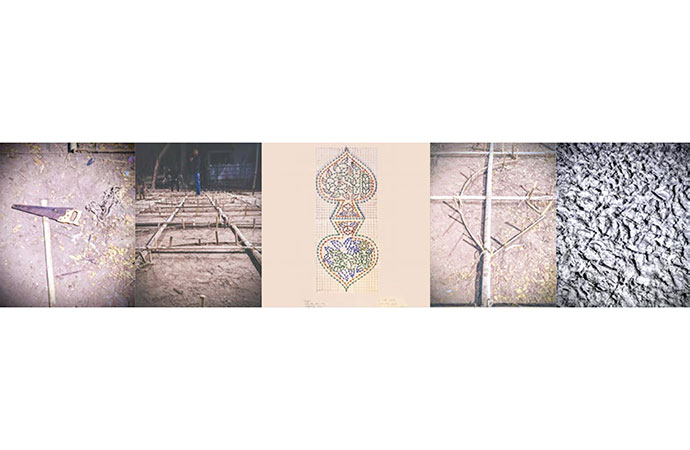 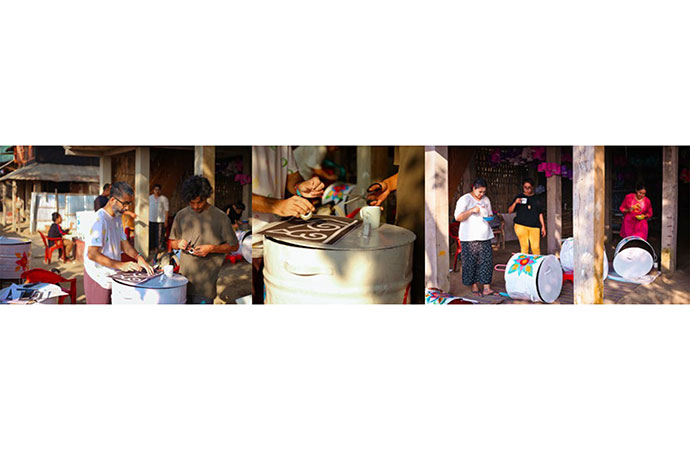 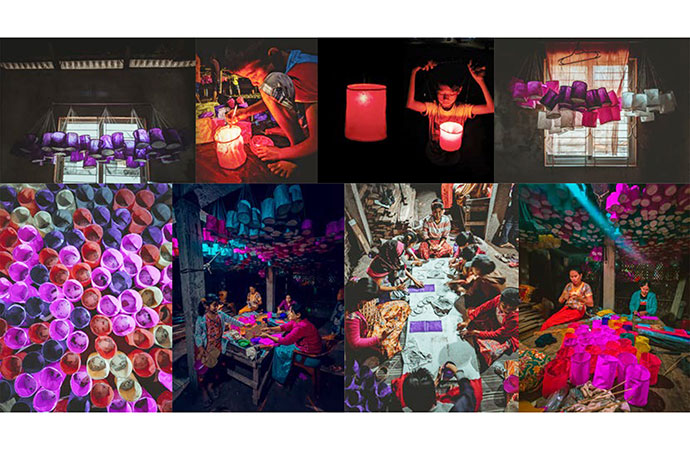 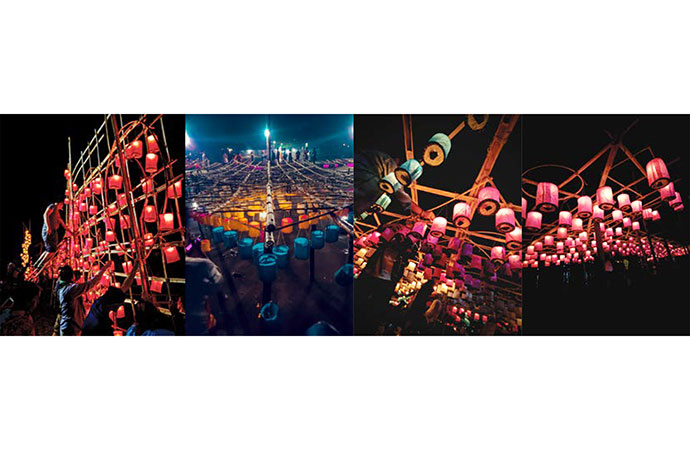 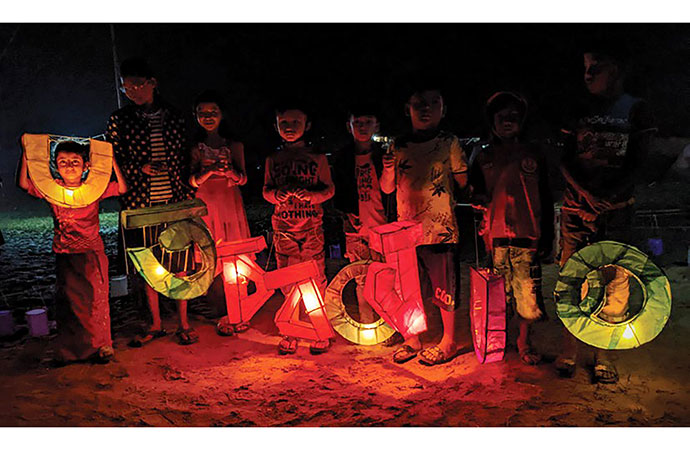 Maa, maati, manush, swadesh, bhasha, prokkriti (mother, earth, people, homeland, language, nature) define and unite communities, binding those who share them. They are intimately familiar from birth, give comfort and refuge, and form the connective tissue of our identities. The recognition and celebration of these vital elements is perhaps nowhere more prevalent than in Bangladesh. Swadesh (lit. one's own country), the right to live and grow food from that earth and the right to one's mother tongue are the root causes that gave birth to the nation of Bangladesh in 1971.

Throughout the wider region of Bengal, special reverence, devotion, and love is accorded to the mother and the land, nation, language, nature, are all in many ways, envisioned as a collective mother. In Bengali Hinduism, mother goddesses are popularly venerated and honored in lavish annual festivals. "Oh Maa", is a popular Bengali saying of surprise or help. A ubiquitous sight in the tangle of Dhaka traffic are gaily painted cycle rickshaws with stylised hearts on their back bumper, which carry the inscription "Maa". The "Maa hearts" are a subtle warning to would-be careless drivers to think of themselves, the rickshawalas and their passengers, all of whom have mothers waiting at home for their safe return.

In his ongoing multimedia project "Travelling with Mother," Bishwajit Goswami explores the interconnectedness of maa, maati, manush, swadesh, bhasha, prokkriti both in his homeland and internationally. The genesis for the project lies in the artist's trip to China in 2016. At the time, his wife was expecting the couple's first child and he deeply missed both the unborn baby and mother -to-be. This prodded him to consider how his own mother must miss him, and in turn, the universality of mothers' concern for the wellbeing of their children. Goswami examines these elements in works from the series such as black and white photographs of various women's faces (among them, his wife's) of various ages, with "maa", "maati", "manush", "swadesh", "bhasha", and "prokkriti" inscribed over them in white Bangla script. He reaffirms the universality of maternal love by including mothers of different countries (Austria, Bangladesh, China, Italy, Nepal, and Sri Lanka) in a series of black and white photographs of women, many with their children, holding the bright jewel-hued rickshaw "Maa heart". In one such photograph, two Bengali women flank a seated blonde woman, conveying that despite cultural and linguistic differences, we are all born of a mother, a homeland, and a mother language.

In the past few years, Goswami has evolved the "Travelling with Mother" series furthering, exploring manifestations of maa-maati-manush-swadesh-bhasha-prokkriti within Bangladesh's minority communities. Many non-Bangladeshis incorrectly assume that Bangladesh is a homogeneous nation, united in a single language (Bangla), ethnicity (Bengali), and religion (Islam). In reality, Bangladesh is also home to hundreds of thousands of Hindus, Buddhists, Christians, many of which hail from ethnic communities with their own mother tongues and distinct cultures.

Goswami sought to concomitantly celebrate his nation's rich linguistic and cultural diversity, and highlight its citizens' commonalities, namely their love of homeland, mother language, and their shared devotion to their mothers. He thus initiated a collaboration with ethnic Buddhist Rakhine community in the Southeastern upazila of Moheshkhali, aptly titled "Maa-Maati-Manush-Swadesh-Bhasha-Prokkriti". The project draws from the indigenous Rakhine custom of erecting monumental ephemeral bamboo sculptures in the form of Buddhist temples on various celebratory occasions. The massive scaffold-like structures perch along the shoreline and their interiors are hung with paper lanterns. At night, the effect is magical: the illuminated sculptures appear to float on the water, on which it is reflected.

International Mother Language Day (21st February) is an especially significant holiday for Bengalis. Now celebrated throughout the world, by a United Nations decree, the holiday originates in Bangladesh in 1952, where 21st February marks the anniversary when the people of then East Pakistan (now Bangladesh) initiated their fight for recognition for their mother tongue, Bangla. This year, to mark the occasion, Goswami together with team Brihatta created a traditional Rakhine bamboo light sculpture with a twist, for the mother in her many manifestations: the earth, language, nature, and all our mothers! Involving many of the local villagers, the artistic team constructed an installation, measuring 22-by-45 feet, in the form of two gigantic bamboo rickshaw "Maa hearts," linking it to others in the "Travelling with Mother'' series. Bangla and the local Rakhine language and script (which are markedly different from each other) were literally and figuratively given equal illumination; two wings (spanning 200 feet total) stretched from the central hearts, one bearing Bangla script, the other Rakhine, spelling "My Bangla mother tongue" and "My Rakhine mother tongue" in thousands of coloured paper lanterns. The black night sky and water were set ablaze with a message of national and human unity in diversity, linked by maternal love.

On 21st February 2021, artworks such "Maa-Maati-Manush-Swadesh-Bhasha-Prokkriti" are of vital significance as the need to identify, honour, and celebrate what unites us all as manush (people) has never been more imperative. The installation, quite literally, spells out bilingually, that we are all connected by and dependent upon the mother we all share, "amader matri bhumi", our mother earth. Goswami and his fellow artists illuminated that vital message. Hopefully, it reflects far beyond the waters of Moheshkhali.

Melia Belli Bose is currently an Associate Professor of South Asian Art History, Department of Art History and Visual Studies at the University of Victoria, BC, Canada.

A year after a streaming service won Hollywood&rsquo;s top honor for t ...

When Rylae-Ann Poulin was a year old, she didn&rsquo;t crawl or babble ...

Brighten up winter cooking with citrus, from juice t ..

The pathbreaking death of Sarah Islam

The pathbreaking death of Sarah Islam

NATIONAL . The government raised the retail price of gas