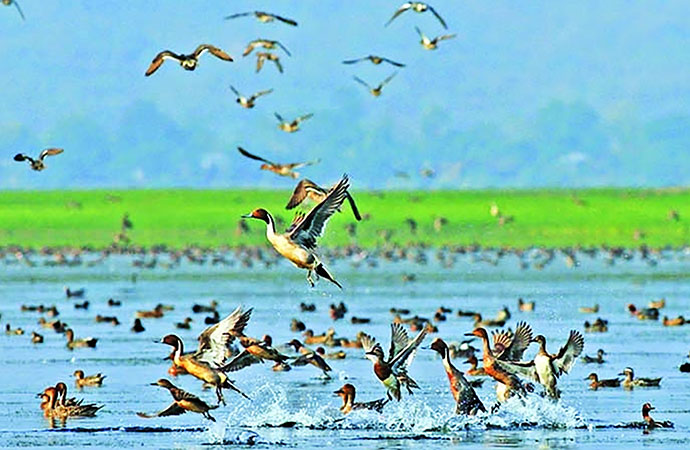 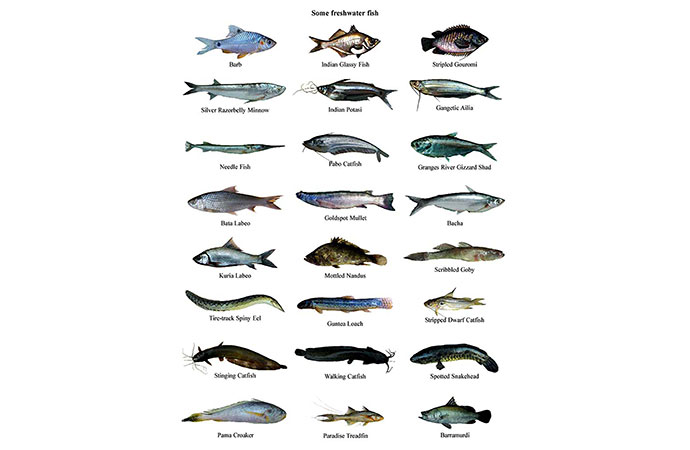 In Bangladesh, the haor region is a rich sanctuary of small fishes, oysters, water snails, bivalves, and pasture spread over the surface attracts the birds migrating from the colder countries in winter. These birds use the haor basin as their resting, as well as roosting, ground. These birds also contribute to the process of eutrophication by adding fertility to the water-bodies by their excreta promoting rich growth of macrophytes and phytoplankton. As haor regions are recurrently submerged by floods, the habitat is characterized by anaerobic conditions that inhibit normal plant growth apart from a group of plants known as hydrophytes. Flood tolerant plant species like the hijal and hual, korij and koroch, bhui dumur, nol, khagra are also available in haor region in Bangladesh.

In haor, almost all segments of cultivated lands are used for at least one rice crop a year. Approximately a 16 percent of the total rice area of Bangladesh falls into this region. Boro is the main variety of rice grown here. The aquatic vegetation of this area provides domestic livestock with a rich grazing. Local people use various herbs and aquatic plants as alternative sources of fuel and fertilizers. Fishery is one of the constitutive sectors of haor economy in Bangladesh. Haors are rich in aquatic diversity in general and diverse fish species in particular. In general, there are 143 indigenous and 12 exotic species of fish along with several species of freshwater prawn in the haor region. Tanguar Haor is characterized by around 141 fish species including some exotic species ˗ Baim, Tara Baim, Gulsha, Gutum, Tengra, Titna, Beti, Air, Kakia, Garia and Gang Magur.

Habitat destruction and sedimentation in rivers, canals, and water-bodies create disturbances in the ecosystem in terms of disruption of fish breeding cycles and migration routes. This leads to the reduction of fish population. Consequently, many species are facing the hazard of extinction. The nearly extinct enlistes species ˗ Angrot, Pangus, Baghayre etc. Some fish species which are at risk of extinction ˗ Chital, Kani Pabda, Madhu Pabda, Telo Taki and Kuchia. The challenges in haor region are loss of habitats due to siltation, habitat alternation and fragmentation, indiscriminate fishing, water pollution, climatic hazards, abuse of agrochemicals, unintentional road construction and extermination of swamp forests.

In Bangladesh, the farming of prawn in saline water has created a colossal concern of ecological degradation, salinity intrusion and poverty. Out of 20 million people, more than 1.5 to 2 million people are directly involved in prawn culture in saline water at coastal area of Bangladesh. In Bangladesh coastal region, about 20 hectares lands are apposite for cultivation out of 32 hectares land. The extension of this area is 98 sub-districts out of 15 districts. Consequently, the land turns into saline which lowers the crop production. In coastal region, for land protection from flood and saline water, government started to build polders since the decade of sixty. Due to the rent-seekers and looting classes, it could not possible rather such kind of initiatives degraded the fisheries and crop production.

Various salts - sodium chlorides, potassium chlorides, potassium permanganate are being used in prawn farming. In result, unusual kinds of impact we have seen − high amount of salinity in water and soil, obliteration of mangrove forest, heavy metal pollution, worsening of water quality, ecological insurgencies in forest, less crops production, less production of plants, animal diseases etc. The workers of chingri-gher do not use any safety at working duration. They are also sufferer of skin diseases.

Other context, our native fish species are losing from coastal ecosystem. Fish resources are an indispensable element of our economy. 80% protein demands are met by fish in our country. Bangladesh is number 4 in global fish production. Every year, Bangladesh produces different types of coastal and river water fish.

The climate and water bodies are apposite for various fish farming. In Bangladesh, there are 8545 bunged water bodies - 3.46 lac acres and 3773 open water bodies− 27.82 lac acres. Most of them are under contract farming by local farmers and national or international agencies. As a result, intensification (extraction of ground water, agrochemicals, hybrid seeds and patent) of water bodies makes it suitable only for hybrid fish, not for aboriginal fish, particularly in coastal region.

In general, our coastal regions and rivers are losing her ecological and physical stability due to the corporate elites and land grabbers. Through the establishing of unplanned switch gate, culvert, bridge, our local rivers are exterminating - mathavanga, kopotakkho, kaligongha, halda, gouri, baleshor, horinghata, muktesshori, chetona, vodra, horihor etc. in this context, ecological insurgencies are intensifying.

At the same time, our native fish resources are losing its breeding ground for future fish population. Some examples of indigenous fish are - vetki, mola, topse, dhela, darkina, jeol, puti, pabda, vol, chanda, bele, tengra, bashpata etc. They are guiltless sufferer of anthropogenic activities and contract farming. They are losing from existing ecosystem. About 58 types of fish are under extinction.

Commercial prawn culture is an awful economy but ecologically suicidal. In addition, it is socially impoverishing and economically unjust. It is true that, prawn is like as white gold of Bangladesh, contributes to earn foreign currency and enrich our economy. Apart from that, we have to think about the cost of ecology and public health. Without ecological inclusion, our existence would be in danger. Time has come to rethink how to combine economy and ecology.

Land of prawn cultures is totally isolated from mainstream crops production area. Salinity tolerant crops must be introduced in coastal region highly. Toxicants free water must be supply among local people. Salts can be use in a sustainable way to protect farming land.

How to Get Hired for Online Writing Jobs

Verging around magnificence, transcending beyond