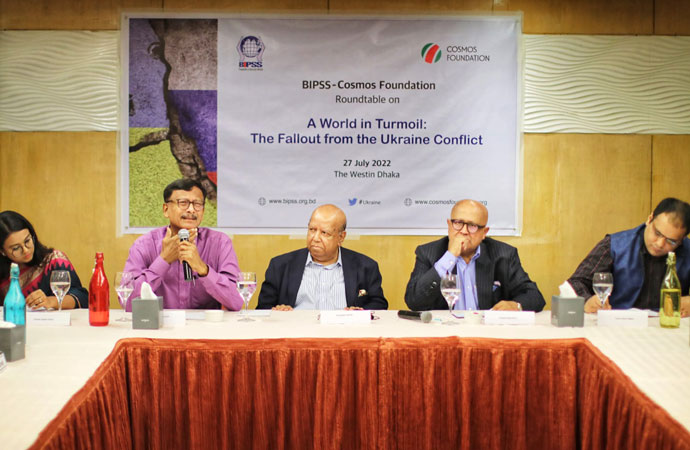 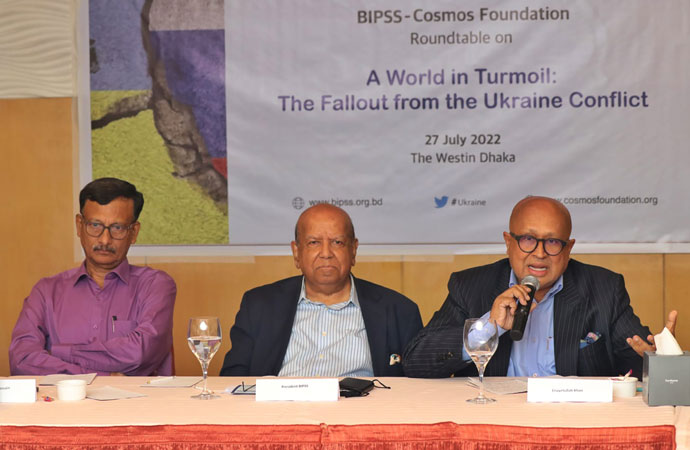 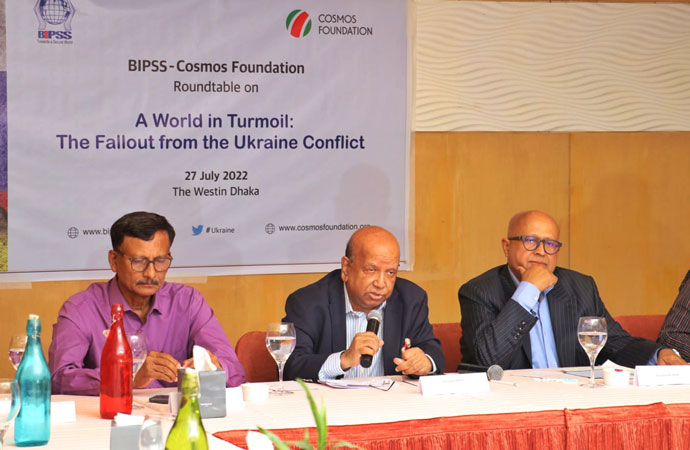 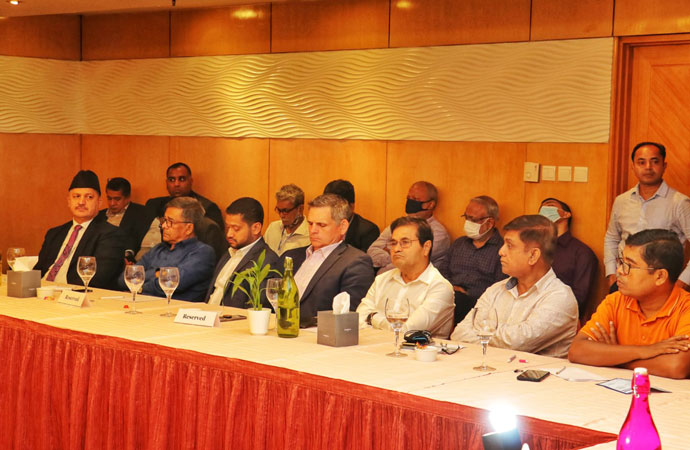 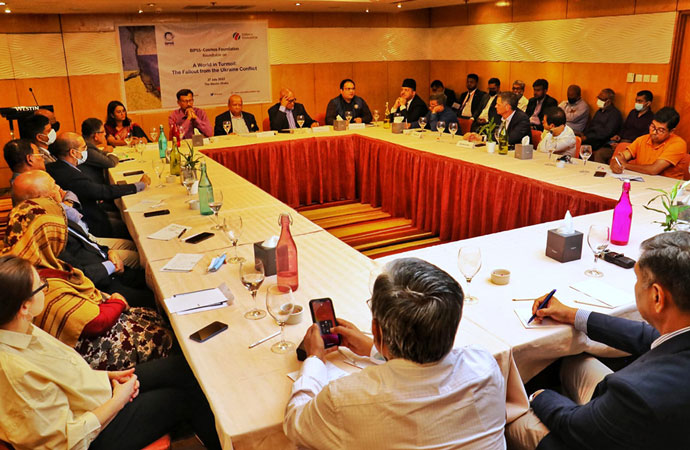 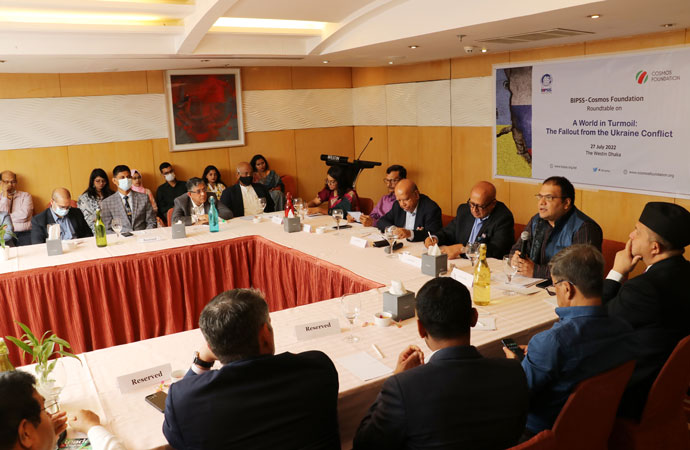 ‘If Bangladesh cannot expand gas extraction from domestic sources within a short time, there would be a great concern for foreign exchange reserves for big payment on oil-gas imports’

Speakers at a roundtable have said Bangladesh remains in a good position with workable human resources, food production and geographical location but laid emphasis on enhancing energy exploration along with a diversified policy for conventional and renewable.

But despite these advantages, the country has fallen backward in the last one and half a decade in its own energy exploration due to lack of a sustainable policy, they said.

The experts raised the issues at the roundtable titled "A World in Turmoil: The Fallout from the Ukraine Conflict" jointly organized by Cosmos Foundation and Bangladesh Institute of Peace and Security Studies (BIPSS) at a city hotel on Wednesday.

Enayetullah Khan said Bangladesh has to enhance its energy exploration along with a diversified policy for conventional and renewable sectors' capacity growth.

"If Bangladesh cannot expand gas extraction from domestic sources within a short time, there would be a great concern for foreign exchange reserves for big payment on oil-gas imports,'' he added.

Bangladesh's agriculture sector will be affected by the Russia-Ukraine war as a big portion of fertilizer imports from Russia and Belarus was closed due to the turmoil, said Khan, adding that Bangladesh as an emerging nation can stay on its own ground without taking sides.

Besides, the Rooppur nuclear power plant, a project of 2400MW of electricity generation from atomic energy, has also fallen into uncertainty because of the Ukraine turmoil.

"A weakened Russian capacity to continue its commitment will have significant negative ramifications for our energy and power availability in the future," Khan said.

He said Russia and Ukraine account for nearly one-third of the world's wheat supplies, and the disruption in global grain supplies caused by the war has affected food security in emerging economies such as Bangladesh, due to both higher prices and supply issues.

He said the continuing conflict will have disastrous consequences for the entire global economy, as well as for Bangladesh.

Khan added that the fiscal policies may need to be adjusted to bring down food inflation and subsidies on fertilizer must be carefully restructured or reformed to make them more sustainable.

Most importantly, he said the diplomatic and political capabilities must be supportive of international efforts to bring this disastrous conflict to a close and world's social peace is restored.

"I fear that the whole world's social peace is in danger," Khan said, adding that unregulated on-line content is spreading disinformation and propaganda that have amplified political divisions worldwide.

Maj Gen Muniruzzaman said the Ukraine turmoil has created a security and energy concern in the world, and when it would end, none can predict it now.

"We primarily identified three dimensions of Ukraine turmoil- food, energy, and finance, as the countries of the world are entirely connected with each other, so every country is affected by the consequences of the war," Muniruzzaman said.

He said the exchange rate has been soaring by Tk8-10 in 24 hours recently, which also creates a concern for Bangladesh to manage its trading and finance.

Muniruzzaman added that they see a new role being played by China, which is completely in a manner that it balances both sides.

But, he noted, it is becoming extremely difficult for smaller countries and middle powers to navigate in this territory where one is compelled to choose sides.

The analyst said a dimension of impact, which is extremely important, is humanitarian. "And we see an emergence of a new humanitarian crisis in the world, both in terms of displacement from the Ukraine conflict in terms of the food crisis, inflation and cost of living."

He said they are very uncertain now how quickly the grains can be released from Ukraine while the international wheat market is skyrocketing.

Muniruzzaman said there is a looming international food crisis. "So these are very serious issues to ponder on."

Touhid Hossain said Bangladesh has to remain in the middle point considering the sensitivity of current global situation and favoring any particular country will be a satirical mistake. "We cannot afford to take any side, plain and simple."

"The world never remains peaceful as a whole, as we witnessed several wars in the world during the last half a century from Vietnam, Korea, Iraq, Afghanistan and other areas where war was happening within the country from local or foreign invention," said the former foreign secretary.

Bangladesh has to fix policy keeping in mind its reliable business partnership as the turmoil would be continued for a long time, Touhid said.

Umme Salma, speaking on strategic issues, said the world is being polarized among different big powers; Bangladesh needs a smart strategy and partnership keeping in consideration the security and financial benefits.

The Ukraine turmoil has created security concerns in Europe and many EU countries increased their military expenses by more than 2% of GDP, she said.

Ukraine industries depend on 30% of Russia while the EU heavily depends on Russian gas, oil and coal energies, so the war affected Russia and Europe, Salma said.

Abbasi said offshore exploration for hydrocarbons is a necessity.

A dispassionate appraisal of the economic situation and a collective consensus on the way forward is a need of the hour, he said.

"We must draw lessons from economic crises in the region," Abbasi mentioned.

The panelists took questions from the audience that included academics, security experts, and foreign policy students.

Explainer: ‘How long is the reserve good for?’