As Durga takes her leave 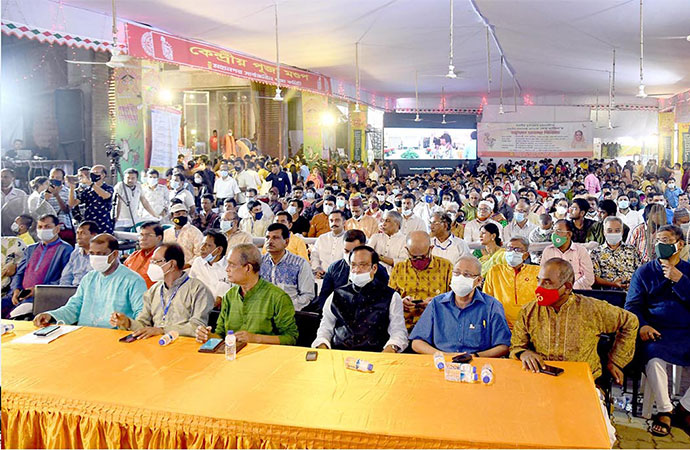 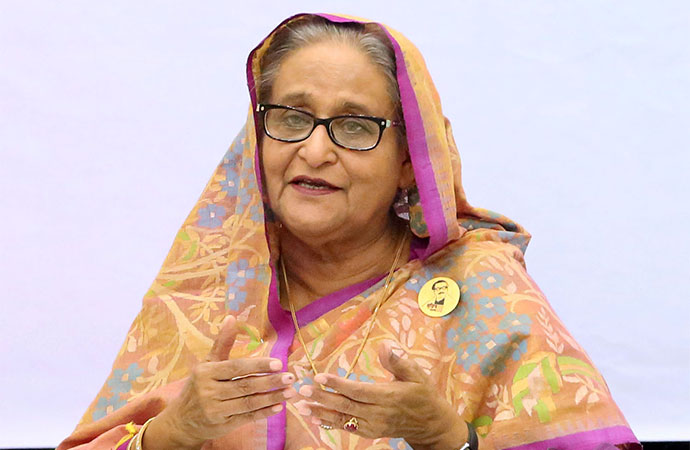 Durga Puja, the most extravagant celebration of the extraordinary goddess of Hinduism capable of inspiring both slayers and prayers, concludes Friday with the Bishorjon, the solemn immersion of thousands of her protimas, or avatars in the form of idols to which they dedicated their days and nights for most of the last ten days.

This year's celebrations however, will forever be remembered perhaps for the wrong reasons, after the Eighth day of the puja was rudely interrupted in a critical part of the game.

Devotees will throng Puja mandaps to celebrate Bijoya Dashami, the last day of the festival, recite the mantras, offer flowers to the goddess Durga (pushpanjali) and pray for her blessings.

The mandaps across the country have been decorated with beautiful idols, showcasing the goddess in all her glory.

Bijoya Dashami is the special ceremony of reaffirming peace and good relations among people.

On this day, families visit each other to share sweets. Married Hindu women apply vermilion on each other's forehead on the occasion.

This year, the religious festival is being celebrated at some 32,118 puja mandaps throughout the country, including the capital.

In the capital, thousands of people are set to throng the Buriganga tomorrow to observe the final phase of the festival -- the immersion of Durga.

Devotees in their tearful eyes will bid farewell to the mother deity and her children - Lakshmi, Saraswati, Kartik and Ganesh - through the immersion of their idols in the water wishing Durga's return next year.

Meanwhile, there will be strict security measures in place so that Durga Puja ends peacefully.

The five-day festival started on October 11 with the incarnation (Bodhon) of the Goddess Durga marking Sashthi.

Durga Puja, the annual Hindu festival also known as Sharadiya (autumnal) Durga Utsab, is the worship of "Shakti" [divine force] embodied in goddess Durga. It symbolises the battle between good and evil where the dark forces eventually succumb to the divine.

"A thorough investigation is on. We're getting huge information. We'll definitely trace those who carry out such incidents and we'll do so...this is the age of technology," she said, mentioning Wednesday's Cumilla incident.

The Prime Minister made remarks while exchanging greetings with Hindu devotees at the Dhakeshwari National Temple virtually from her official residence Ganobhaban on the occasion of Durga Puja.

Sheikh Hasina said proper action will surely be taken against the culprits, no matter what religion they belong to.

"They must be found out. We did so in the past and will do it in the future, too. They must face the due punishment. We want such punishment so that none dare to do so (engage in communal incident) in future," she said.

Mentioning that your religion is a personal matter but festivals to be shared between all, the Prime Minister said some evil cliques are there who sometimes want to destroy the spirit of the people by carrying out some unwanted incidents, and very unfortunate, she added.

"There are some people of evil-intellect who want to destroy a thing when it goes well. When Bangladesh is moving fast on its development journey, they want to disrupt this journey and also create a problem inside the country," she said.

"It (communal incident) is the act of those who can't win the public trust and confidence and who have no politics and no ideology. This is one manifesragion of their weakness," she said, urging all to be alert over such incidents.

"We're definitely taking proper action in this regard," she said.

The Prime Minister urged the country's Hindu community to keep the number of new small and makeshift Puja Mandaps limited here like in India, and concentrate on religious celebrations in universal Puja Mandaps for the sake of getting proper security from law enforcers.

"If it can be kept limited, our law enforcement agencies would have the better scope to provide the overall security (in the universal Puja Mandaps)," she said, adding that the Durga Puja is being held peacefully amid festivity in 32,118 Puja Mandaps across this year.

The number of small and makeshift Puja mandaps is on the rise and this year 1,905 additional Puja mandaps were set up, she said.

"Take measures on your own. Bangladesh Puja Udjapan Parishad can particularly have a guideline over the number and places of Puja mandaps. If it can be kept limited, it would be helpful for our law enforcement agencies to provide overall security," she said.

Hasina also asked the leaders and activists of her party Bangladesh Awami League and its associate organisations to help maintain security in Puja celebrations in their respective areas.

She said the BNP-Jamaat clique, coming to power after 1975, had created divisions and triggered conflicts in the name of religion in the country. Besides, the worldwide rise in militancy, terrorism and such activities has also cast an adverse impact on Bangladesh, she added.

Not only Bangladesh but also our neighbouring country, India, needs to be aware and careful about the communal harmony, the PM said, adding that Bangladesh ialways remembered with gratitude for the help of India during the 1971 Liberation War.

"So, my request is that they should be a little bit more aware so that nothing is done there that affects our country," she said.

Hasina said she wants the people of the country to lead a good and peaceful life enjoying religious freedom. She urged the Hindu community not to consider themselves as a minority but feel good as worthy citizens of the country.

Hasina said Islam supports the freedom of the people of all religions and never encourages any divisive act. "But some people are here who suffer from a sense of religious bigotry and they always want to instigate communal conflicts. It's not only in our country or in the Muslim community, these types of people are also there in all religions who always try to create troubles," she added.

"If we all move together, they won't be able to harm our society," the Prime Minister added.

Several people involved in the Cumilla incident have been identified and some suspected instigators detained, said Home Minister Asaduzzaman Khan on Thursday.

"We'll hunt down those involved in the incident. We've identified some of them and they'll be held without any delay," he said.

The home minister made the remarks while talking to reporters after a meeting with senior officials of the police, BGB and Rab.

"We're investigating the incident. We'll let you know after the investigation. So far, it appears to us that it's a motivated act planned by a vested group," he said.

Some of the suspects have been detained in Cumilla and they are being interrogated, he added.

Amid the escalating tension over the Cumilla incident, members of Border Guard Bangladesh (BGB) were deployed in 22 districts, including Chattogram, Cumilla, Narsingdi and Munshiganj districts to assist the civil administration.

The BGB troops have been deployed following the demand of local administrations and as per the directives of the Home Ministry to ensure security during the ongoing Durga Puja celebrations across the country, said BGB Director (operation) Lt Col Foyjur Rahman.

Earlier, eight platoons of BGB members were deployed in different parts of Chattogram district to maintain law and order in the wake of tension triggered by rumours of an alleged desecration of the Quran in Cumilla.

The BGB troops were deployed around 9 pm on Wednesday and they will remain out there till October 16, said deputy commissioner of Chattogram Mominur Rahman.

The incident occurred on Wednesday when the Hindu devotees were celebrating Durga Puja, the largest religious festival of the Hindu community in Bangladesh.

Meanwhile, Awami League General Secretary Obaidul Quader has warned that those involved in the Cumilla incident will be brought to justice and no offender will be spared.

"It's an act of an evil communal force, and those who attack Hindu temples won't be spared either, even if they belong to any party," Obaidul Quader said while addressing the Mahastami (8th day) of Durga Puja at KIB premises in the capital on Wednesday evening.

He said a united resistance has to be built against those who want to destroy the communal harmony in the country before the national election.

Besides, State Minister for Religious Affairs Md Faridul Haque Khan has urged the people of the country to exercise restraint and not to take law into their own hands over the reported desecration of the holy Quran in Cumilla.

"Don't take law into your own hands. Everyone should maintain religious harmony and peace," he said in an emergency announcement on Wednesday evening.

"We're closely monitoring the situation in Cumilla. The local administration has been instructed to investigate what really happened [there]." he said.

"Anyone involved in destroying religious harmony [in the country] must be brought under the ambit of law and arrangements be made to give proper punishment," the state minister added.

India has acknowledged the "prompt" steps from the government of Bangladesh with additional deployment of security forces following the reports of vandalism in some Hindu temples and Durga Puja venues.

"We note that the government of Bangladesh has reacted promptly to ensure the control of the situation, including the deployment of law enforcement machinery," Indian Ministry of External Affairs (MEA) Spokesperson Arindam Bagchi told reporters in New Delhi on Thursday.

He said they also understand that the ongoing festive celebrations of Durga Puja continue in Bangladesh with the support of government agencies and of course, a large majority of the public.

The Indian High Commission in Dhaka as well as its Missions outside Dhaka are in close contact with the authorities in Dhaka and at local levels over the matter, Bagchi said.

The Spokesperson said they have seen some "disturbing reports of untoward incidents" involving attacks on religious gatherings in Bangladesh.

While visiting Puja venue at Karwan Bazar Media Para, both police and members of Border Guard Bangladesh (BGB) were seen while both Muslims and Hindus were seen at the venue together.

And what about 'festivals for all?'