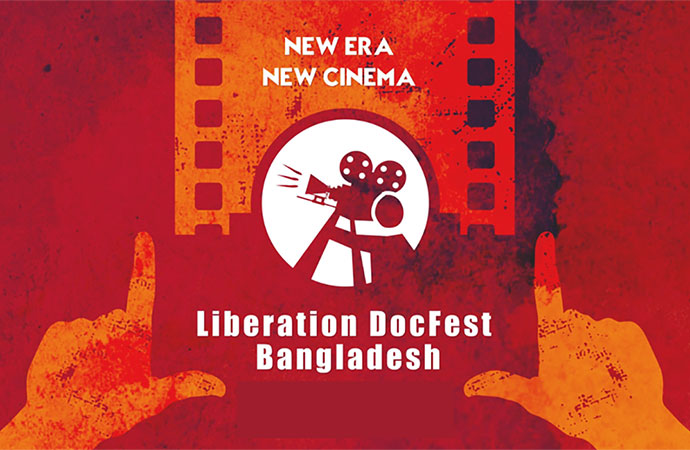 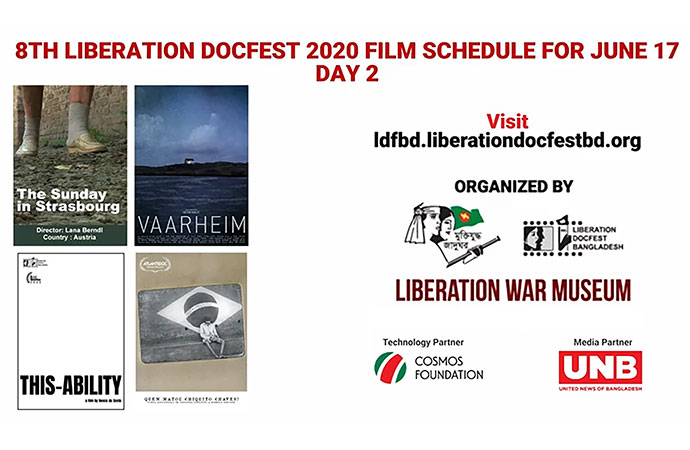 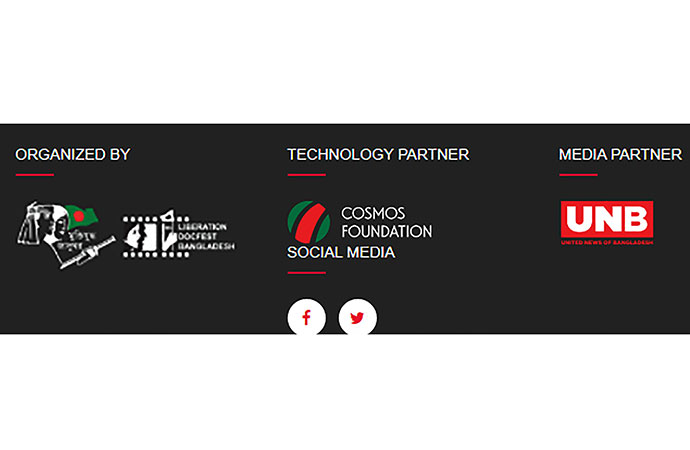 The 8th annual Liberation DocFest Bangladesh-2020, first of its kind in South Asia, began on June 16, Tuesday virtually connecting global film producers and audience demonstrating that coronavirus pandemic could not stop them from getting connected through minds and hearts.

The five-day festival, previously known as the International Festival of Docufilms on Liberation and Human Rights, has generated much interest among film lovers at home and abroad.

The Liberation War Museum, a peoples' museum dedicated to highlighting the history of Bangladesh's struggle for Independence and its presentation to the new generation, is hosting the festival. The theme of this year's DocFest is 'Bangabandhu: The Liberator'.

A festival solely dedicated to documentary cinemas, seeking to highlight the struggle for Liberation and Human Rights of people in various parts of the world and its contemporary significance - the event has always been one of the most awaited and celebrated film festivals in Bangladesh.

The festival aims to uphold new forms of viewing the human suffering and struggle for justice in the global perspective.

This unique festival also focuses on breaking new ground and on the great diversity and vitality of storytelling and creativity of the documentary genre.

A total of 70 films will be screened during the festival that will continue until June 20. Viewers will be able to enjoy the films by visiting www.liberationdocfestbd.org To watch the films, viewers will have to register themselves.

About the initiative, Liberation War Museum's trustee Mofidul Hoque said the Liberation War Museum has constantly been motivating and patronizing filmmakers to make documentary films from its inception so that the current and future generations can get the opportunity to taste and understand the essence of our glorious Liberation War in 1971.

"We started this spontaneous journey of documentary films from our previous museum space at Shegun Bagicha to the newly founded spacious museum space in Agargaon, and since then we have been celebrating this festival at a bigger and better arrangement," he said.

Expressing his heartfelt gratitude to the organizing partner Cosmos Foundation and UNB, Mofiqul Hoque said this year marks the 8th edition of the Liberation DocFest Bangladesh and was supposed to be held from April 2 to April 6, 2020.

However, due to the outbreak of Covid-19 virus the countrywide lockdown was declared and the Liberation War Museum like many other institutions, was closed, so the Liberation DocFest Bangladesh festival had to be postponed.

"Thanks to the Cosmos Foundation for coming forward with the required assistance to arrange this year's festival online, so now the festival and all these wonderful documentary films from over 50 countries can be explored by everyone around the world - which gives us a much larger platform than our usual arrangements at the museum," he said.

Cosmos Foundation Chairman Enayetullah Khan said they are delighted to get the opportunity to their extend cooperation for the festival. "We feel proud of that."

He said it is certainly a great matter of joy that Cosmos Foundation and United News of Bangladesh (UNB) got associated with this year's DocFest.

Regarding the first-ever online documentary film festival in South Asia, he said approximately 1800 documentary films from 112 nations have been submitted for this year's festival - and this is, indeed a great matter of pride for Bangladesh.

Khan said it will help build a positive image for the country in the world.

"We are all affected due to COVID-19 pandemic. We are all confined at homes. But nobody could confine our hearts. We are marching ahead despite many barriers," he said.

"I believe the audience around the world would be able to happily connect themselves with all the wonderful films participating in this DocFest," Khan added.

The winners in the competitive sections will receive cash prizes, certificates and crests.

Cinema of the World section will feature films from across the globe. Documentary films on the country's founding president Sheikh Mujibur Rahman and leaders will be screened under the section 'Bangabandhu and other icons of national liberation in Third World' and the package named 'Northeast is not far way: Documentaries of Northeast India' will feature documentaries from Eastern India.

Enthralling tales from home, abroad and beyond

'Our territory', a film from Belgium by director Mathieu Volpe is scheduled to be projected on Wednesday at the festival. The 21-minute film is participating in the 'International Competition' section.

'True False and A Revolution' is a Bangladeshi film, directed by Farid Ahmad. With a duration of 48 minutes, the film is scheduled as part of the 'National Competition' category.

'Joy Bangla' is a unique Bangladesh-Japan collaboration by Japanese filmmaker Nagisa Oshima. The 25 minutes-long film is part of the 'Special Package' category.

'Aegean', a joint presentation from Portugal and Greece by filmmaker Tomás Barão da Cunha. The 29 minutes 50 seconds film is competing in the 'Cinema of the world' section.

'Aguan-Sun Behind the Horizon' by Bangladeshi filmmaker Novera Hasan Nikkon is a short film with a duration of 8 minutes and 40 seconds, being projected as part of the 'Cinema of the world' category.

From Argentina, filmmaker Juan Manuel Repetto is presenting his 84 minutes-long doc-film 'ANOTHER SENTENCE' in the 'Cinema of the world' category, as well.

'Jin Tian Bu Hui Xia Yu' (I Don't Think It Is Going To Rain) is another joint production by China and Spain, competing also in the 'Cinema of the world' section. The 10 minutes 55 seconds film is directed by Adrià Guxens.

Continuing the excellence of joint productions, director Kavich NEANG's film 'Last Night I Saw You Smiling' is also a part of the 'Cinema of the world'. The 77 minutes and 34 seconds film is a joint production from Cambodia/France.

'Last seen heading for the forest' is a 8 minutes 30 seconds-long short documentary by Nataliia Egorova. The film is representing the Russian Federation in the 'Cinema of the world section'.

Austrian doc-filmmaker Lana Berndl's 91 minutes film 'The Sunday in Strasbourg' is also participating in this category.

Another joint presentation from war-torn Middle Eastern countries Syria and Lebanon, 'The Way Home' is a film by Wael Kadlo. The 64 minutes 30 seconds presentation is competing at the 'Cinema of the world' section.

Canadian filmmaker Bosco da Costa's 09 minutes long cinema 'This-Ability' is also participating as part of the 'Cinema of the world'.

'Vaarheim' is a presentation from the United Kingdom by filmmaker Victor Ridley. The 29 minutes and 59 seconds-long film is also competing in the 'Cinema of the world category'.

'Who killed Chiquito Chaves' is a documentary film by Brazilian filmmaker duo Giovanna Giovanini and Rodrigo Boecker. The 15 minutes-long film is also being showcased as part of the stacked and competitive category of 'Cinema of the world'.

Alongside a great bunch of extraordinary full-length documentary films, there are multiple short films being shown on the third day.

'Awakening of the Goddess' is a unique short film from India by Debjani Mukherjee. 'Lo sono Rosa Parks' (I am Rosa Parks) is another short film, by Italian filmmaker Alessandro Garilli.

'Highways of Life', a film from India by director Amar Maibam is being projected at the festival's 'International Competition/Special Package' section.

'Khunti (Road to Roots)' is a Bangladesh/India joint collaboration film, directed by Md Zahirul Hassan. The film is being projected as part of the 'National Competition' category.

As part of the stacked 'Cinema of the world' section, multiple noteworthy films are currently being projected at the official website of the festival.

Indian filmmakers are having great participation in this particular category. Anupama Srinivasan's film 'Are You Going to School Today?' and 'Bloody Phanek' by filmmaker Sonia Nepram are being projected in this section.

As part of the joint-productions, filmmakers Thomas Grand and Moussa Diop from Senegal are presenting their film 'Golden Fish, African Fish', along with 'Undocumented Unafraid' which is a joint documentary production from the United States and Mexico by filmmaker Arturo Pulido are also being projected as part of the 'Cinema of the world'.

Among other films, 'Transformation' is from Belarus by Roman Romanov; 'Congo Calling' is from Germany by filmmaker Stephan Hilpert and 'We are soldiers' is a Ukrainian doc-film by Svitlana Smirnova, are also being projected at the festival in the same category.