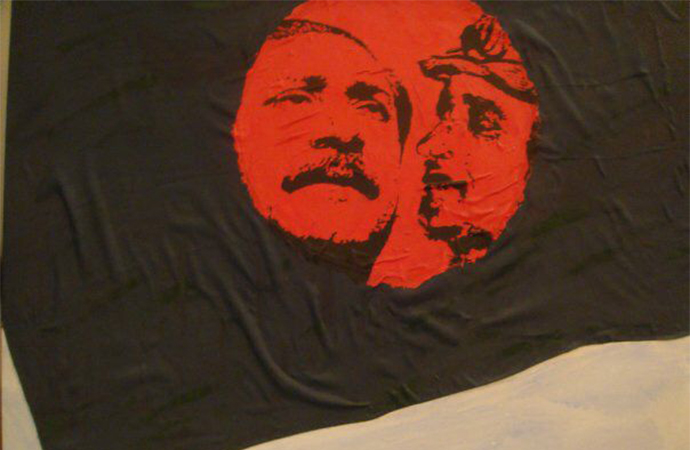 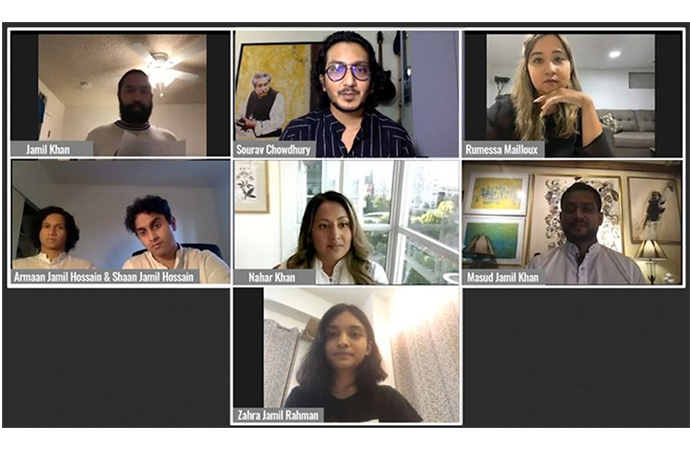 The rueful month of August is remembered as one of the darkest days in history for the brutal assassination of the Father of the Nation, Bangabandhu Sheikh Mujibur Rahman and his family members on August 15, 1975. On that day, the then Director-General of DGFI (Directorate General of Forces Intelligence), Shaheed Brigadier General Jamil Uddin Ahmad, 'Bir Uttam', was the only one to sacrifice his life to save Bangabandhu.

The special interview, hosted by noted visual artist Sourav Chowdhury, commemorated the valiant patriot who his grandchildren never met in person due to his heroic sacrifice and untimely departure. The grandchildren also fondly remembered their late grandmother Anjuman Ara Jamil, former Member of Parliament and an iconic entrepreneur in the country.

Sourav Chowdhury: Being the eldest grandchild, how do you view your grandfather and honour his legacy?

Masud Jamil Khan: Unfortunately, I couldn't meet my grandfather in person - however, I always receive mass admiration from everywhere as the grandson of Colonel Jamil and my grandmother Anjuman Ara Jamil, a former Member of Parliament representing Kushtia, Meherpur and Chuadanga. She established the Jamil Foundation, empowering local women - which we are proudly continuing as their legacy. As the Deputy Managing Director of the Cosmos Group and also a father of three beautiful daughters, I always feel that the patriotism, sacrifice and dedication of our grandparents have always inspired us to gloriously move with confidence, pride and dignity.

Sourav Chowdhury: Cosmos Foundation has been focused on working towards preserving Bangladesh's history and culture, namely the works and legacy of the Father of the Nation, Bangabandhu. Could you tell us about this?

Masud Jamil Khan: Through our Cosmos Foundation and its artistic wing Gallery Cosmos, we have been organizing several cultural activities to fulfill our commitment to the society - including special exhibitions, art camps, workshops and more, at home and abroad. We have published special books on the Father of the Nation, namely "Bangabandhu: Epitome of a Nation" and "Brave Heart". Written by Enayetullah Khan, these books are incomparable as these have featured exclusive memoirs of Bangabandhu and also our patriotic grandfather, and I hope we will see further publications in the future."

Sourav Chowdhury: Jamil Khan, you are currently joining us from San Diego California in the US. You are named after your heroic grandfather and you have a lot of similarities too, I hear. Could you tell us about your grandfather?

Jamil Khan: We grew up hearing the stories about our brave-heart Nana (grandfather) from my mom, my Nanu (grandmother) and my aunts. Recently, I learned that my Nana Bhai liked photography, and I like photography too - my photography exhibition was held in Dhaka back in December 2004. Nana bhai liked to travel, I like to travel as well. To preserve his legacy, I have plans to feature his heroism through writing and archiving publications, photographs and more.

Sourav Chowdhury: Rumessa Mailloux, thank you for joining us from Toronto, Canada. Please tell us about your thoughts and feelings on your grandfather.

Rumessa Mailloux: I was born nine years after my Nana's passing, so we couldn't meet in person. However, I was blessed to hear the stories regarding how charming, handsome, sincere, charismatic and humble of a person he was. He is the pride of our family and our nation, as he was the only one who sacrificed his life for Bangabandhu Sheikh Mujibur Rahman - the greatest leader and founding father of Bangladesh.

His legacy is being continued through his grandchildren and great-grandchildren. Three years ago, my son did a project on Nana Bhai and I am so proud he shared his story with his Canadian mates, who were amazed to know about our family history. A true hero lives forever and remains immortal because of the heroic acts, and I hope my Nana and Nanu have reunited peacefully in heaven.

Sourav Chowdhury: Nahar Khan, you are the youngest daughter of Tehmina Enayet. How has your grandfather's legacy had an impact on you?

Nahar Khan: I never had the opportunity to meet my grandfather, but I have felt the impact of his loss through those he left behind. After my Nana's passing, it was a time of great difficulty, but what that went on to do was create a force of nature, which was my Nanu - Anjuman Ara Jamil. She singlehandedly raised a generation of strong women, who I'm privileged to call my mother and aunts. So, I have been raised by extremely strong, compassionate and brave women. I believe all seven of us here (the grandchildren), are a product of that strength.

After the assassination in 1975, my Nanu was offered a new life overseas, but she declined and remained in Bangladesh where she became one of the top women entrepreneurs of the country and worked tirelessly for her people in Kushtia, as a Member of Parliament. So, we've grown up with the example of service to others and to the country.

My Nana underwent rigorous training throughout his career which made him one of the most highly skilled in the history of Bangladesh and Pakistan Army. When my Nana and his family were repatriated, he was offered a high ranking position at Inter-service Intelligence in the Pakistan Army, however he declined and returned to serve his country. After returning to Bangladesh, he was personally sought and selected by Bangabandhu himself, to serve as the Military Secretary to the President. So, the values of patriotism and love for one's country is imbedded in all of us, I believe.

My grandfather was the only person who responded unflinchingly to Bangabandhu's call that fateful morning, and I am an extremely proud granddaughter knowing that he sacrificed his life for our Father of the Nation, a leader who brought Bangladesh its victory and sovereignty.

Sourav Chowdhury: Last year, you organized and curated an interactive exhibition called 'The Black Story', which tackles very sensitive issues. Do you think your grandfather's bravery and courage influenced you for such an undertaking and other projects under the Cosmos Foundation?

Nahar Khan: As part of the Cosmos Foundation under the leadership of my father Enayetullah Khan, I facilitate activities of our media and philanthropic arms. We established the Cosmos Foundation with the objective to create a platform for substantive discussions and research on Bangladesh's bilateral relations with other players around the world. We also have a keen focus on social and humanitarian issues, namely the Rohingya crisis, and on a personal level - I work with autistic children.

Last year, with the onset of COVID-19 the Foundation and Gallery jointly hosted Bangladesh's first-ever virtual exhibition in honor of Bangabandhu, my grandfather and other assassinated martyrs of August 15, 1975. Enthusiasts around the world experienced the exhibition virtually and were able to learn about Bangladesh's history. We are also humbled to have collaborated with the Bangladesh Liberation War Museum to produce the first-ever virtual edition of the Liberation DocFest, which drew a large viewership from around the world.

Going back to your question about curating 'The Black Story' interactive exhibition, I felt a sense of restlessness and responsibility to speak up against racism, colourism and discrimination. Inspired by my grandfather's morality and fortitude, I found the much-needed courage from him. I want to be able to instill the same set of values in my daughter, and I believe, we should raise our future generations with such teachings.

We are immensely grateful to our honorable Prime Minister Sheikh Hasina, for honoring our grandfather as 'Bir Uttam,' one of the highest state honors for individual gallantry, and for formalizing his promotion as the Director-General of DGFI (Directorate General of Forces Intelligence), a position he obtained right before his death on August 15, 1975. I hope that many others can be as inspired as I am by my Nana's patriotism and dedication to duty, so we can continue to build our nation. Joy Bangla, Joy Bangabandhu.

Sourav Chowdhury: Shaan and Armaan Jamil Hossain, you have both joined us from Los Angeles, California in the US. You are both Shaheed Brigadier General Jamil Uddin Ahmad's second daughter Afrozaa Jamil's two sons. Please share your thoughts and feelings on your grandfather.

Shaan Jamil Hossain: Although we were born and raised in the United States and never got to interact with our nana bhai, his inspiring life lessons have always made us feel his presence. We learned about him from our mother, our aunts and all of our cousins, and I feel extremely proud to be his grandson whenever I think about the gallantry he showcased on the day of August 15th, 1975. It was only him, who had the courage to leave his loving family behind and sacrifice his life to save the Father of the Nation and his family. He is always going to be remembered as a legend, and I feel lucky to inherit the name of this wonderful man.

Armaan Jamil Hossain: We are a very closely-knit family - all of us cousins grew up together and are very close to each other. The sense of harmony is channeled in the family through the teachings of our grandparents and their legacy. Every time August 15th comes around, I see the deep sadness in the eyes of my mom, my aunts, my cousins and every member of our family and it's a very difficult time for all of us. But at the same time, though I never met my Nana Bhai, I'm extremely proud to be his grandson.

Sourav Chowdhury: Zahra Jamil Rahman, you are the only daughter of Karishma Jamil, Colonel Jamil's youngest daughter. Your mother was never able to meet your grandfather - please share your thoughts and feelings.

Zahra Jamil Khan: My mother has never seen her father in her entire life, as she was yet to be born. When there was no one to save Bangabandhu and his family, my grandfather was the only one who immediately responded to the call of duty with bravery and courage. I wish no one goes through the unimaginable amount of pain my mother and all of our family members had to embrace, but at the same time, I feel immensely proud to be the granddaughter of my grandparents.

Echoing the harmony, bonding and togetherness in the family, the grandchildren of Shaheed Brigadier General Jamil Uddin Ahmad believe that the legacy of the brave-heart martyr will always be respectfully remembered in history.

Bats gorge on Debdaru fruit and ‘grin in their sleep ...