Bidyanondo’s Mehmankhana: Where the hungry are made to feel special 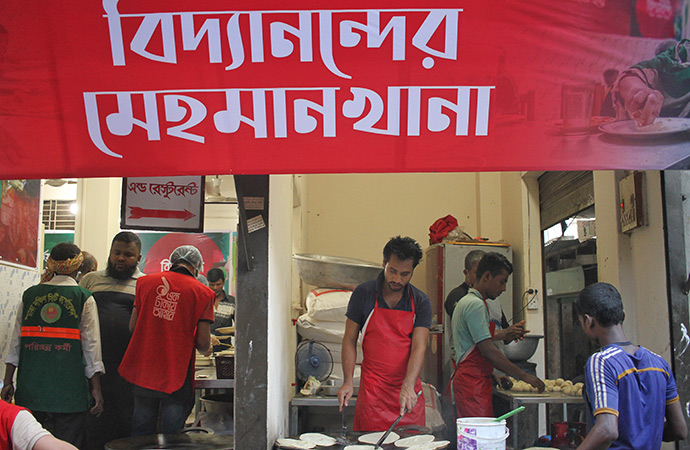 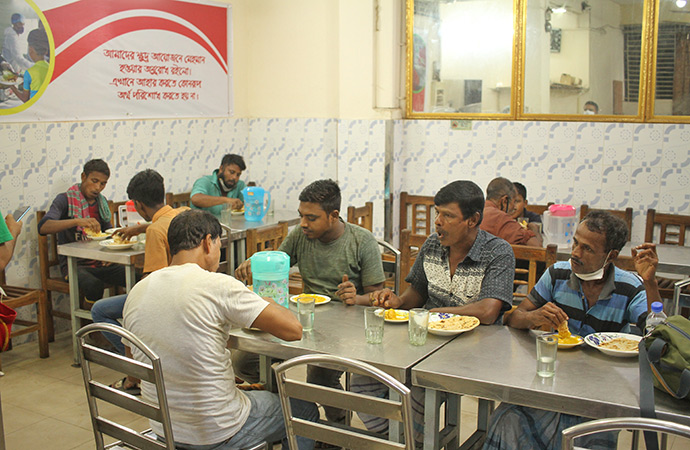 Bidyanondo Foundation, known for innovative initiatives to serve the marginalised people even before the COVID-19 pandemic hit lives and livelihoods in Bangladesh, have unveiled their latest initiative to feed the jobless and low-income people: an all-day all-you-can-eat buffet at an old restaurant converted into a 'Bidyanondo Mehmankhana' (Guesthouse).

The organization has been serving free food to almost two-thousand people every day since opening its doors on July 18 at the Khan Hotel, on Tipu Sultan road, Wari, Old Dhaka. This noble initiative has been garnering massive praise from people all over the city and became a trending issue on social media.

Since the beginning of nationwide lockdown, Bidyanondo has been fighting against the havoc of the pandemic on a larger scale of relief distribution with donations. It even started operating a full-fledged community hospital in Chittagong in a joint collaboration with Chittagong Metropolitan Police (CMP), for serving better healthcare to the marginalised people.

In these challenging times, when many people are unable to eat three meals in a day due to financial crisis, Bidyanondo has started operating this first community restaurant in Dhaka.

People from all walks of life are seated under one roof together to enjoy nutritious meals for free in Bidyanondo Mehmankhana.

While talking to UNB in detail about the holy initiative, Bidyanondo's Dhaka unit branch manager Salman Khan Yeasin shared a heartwarming story, to begin with.

"Our Kishore da (Kishore Kumar Das), founder of Bidyanondo, had once been scolded by a restaurant authority - just for looking at the food at the shelve but not buying anything because he had no money. That incident during his childhood changed his perspective, and when we needed to start an initiative like this to serve foods to the needy ones during this crisis, he told us to immediately start this community restaurant - where no one has to look at the food helplessly or cross this place with being hungry, just because they do not have money."

Describing the magnitude of their daily arrangements, Salman described that every day almost 50kg of flour to make roti and paratha, 50kg of chicken meat, 20kg of lentils and 4,000 eggs are being cooked to provide unlimited meals to the guests from 7 am to 9 pm.

"We did not start just for the sake of starting," Salman continued. "We count every person as our honourable guest just like the customers in a restaurant - and we want to make them feel important, feel good. To maintain health safety, we check everyone's body temperatures and make sure that the guests wash their hands before sitting at a table. We can serve up to 30 people at a time."

Speaking to UNB, Salman informed that the hotel is owned by the family of a Bidyanondo volunteer, Mohammad Arif Mahady - who came forward with his family to let the organization utilize it place for the noble venture. Currently studying at the Faridabad Arabic University In Mishkat Jamat, Arif shared his side of the story to UNB about the project and his involvement.

"This is our family hotel, and all my family members are heavily involved in the overall management," he said. "Even my father is regularly monitoring every bit of maintenance till date and we, the brothers, often work here whenever we manage time from our schedules."

On how he planned to let Bidyanondo use the hotel, Arif said, "Since the beginning of the lockdown, our hotel was sort of closed as people were not being able to eat outside. So when the plan was discussed among ourselves (Bidyanondo), I came up with the proposal to use this hotel and my family wholeheartedly agreed on this with further cooperation."

Fifteen cooks and associates of the restaurant who had been furloughed by the lockdown, are now busy with preparing the foods - and three to four volunteers of Bidyanondo are working on a roster basis to monitor the overall process.

Since this community restaurant opened its doors on July 18, many low-income people including small business vendors, housemaids, beggars, cobblers and others have come here to have their daily meals.

According to Salman, to maintain the vision of not hurting anyone's self-esteem, volunteers arranged a token system so that no one has to wait in line to receive the food like relief. If all the seats are taken, they can still collect the token and come back at a suitable time to have their meal.

He also informed UNB that the organization is planning to spread this idea of community restaurants in the whole country and soon they will be starting four other restaurants in different parts of the city.

In addition to that, Bidyanondo is also preparing to serve Eid meals and Qurbani meats to low-income people during the upcoming Eid ul Adha, both in the capital and several other parts of the country, according to Salman.

The sad plight of Rayhan Kabir in Malaysia