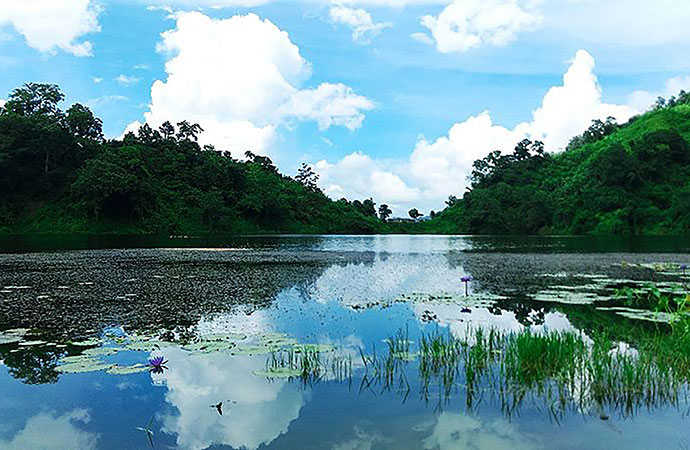 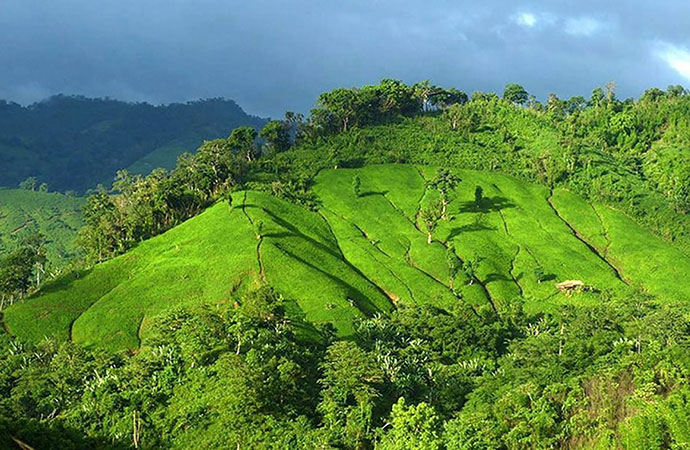 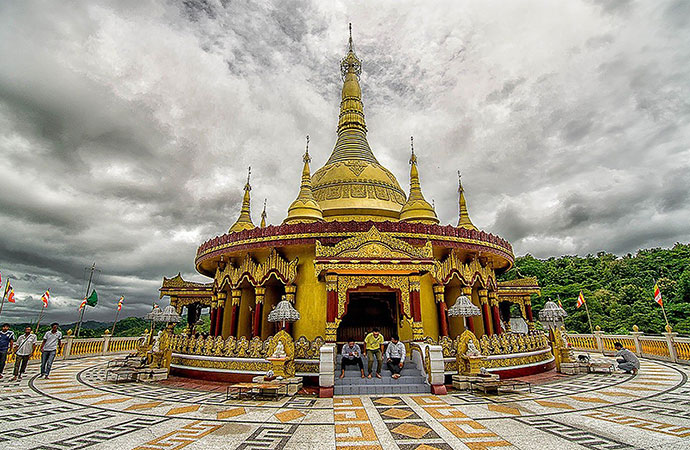 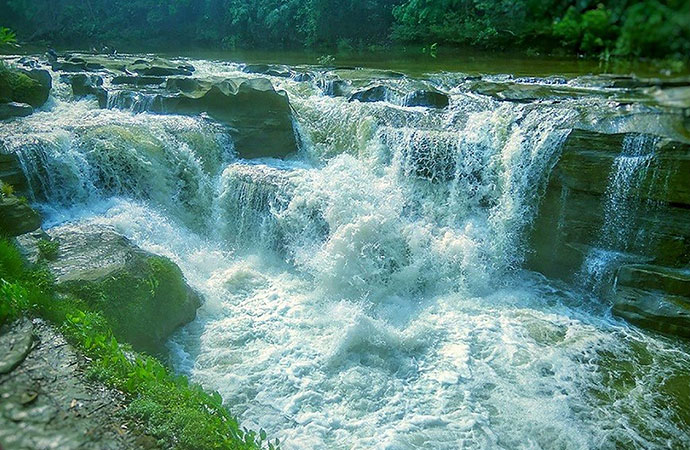 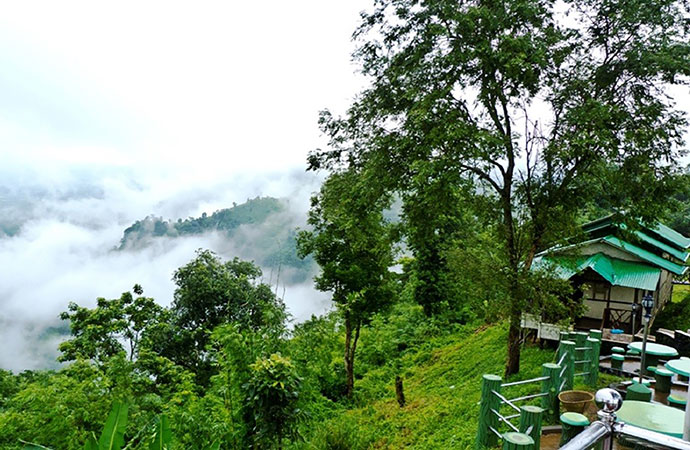 Regular stress of city life tends to suck the energy out of the soul pushing people towards chronic anxiety. Every once in a while, you must plan a vacation on a hill, where the blue sky, unruly hilly rivers, and voluminous natural cascades can revive your soul. Visit Bandarban tourist spots! Located in the southwestern part of the country, and part of the storied Chittagong Hill Tracts, the Bandarban district holds enough magic to do the trick. In this article, we are going to focus on the best places to see and the craziest things to do in Bandarban.

The mirror view of Boga Lake can make you forget the humdrum of city life and pacify your soul preparing you for facing life with greater stamina. Bagakain Lake or Boga Lake is one of the most magnificent lakes in the country. This 15-acre wide natural lake is about 18 km far from Ruma Sadar Upazila under Bandarban. Placed about 3000 feet high above the sea-level, Boga Lake fascinates visitors with blue water, big rocks, surrounding greenery, local tribal communities, etc.

It is believed that Boga Lake was created by an earthquake that occurred 2000 years ago. There are interesting supernatural mythologies related to Boga Lake. The fact that it never dries up adds fuel to those ancient folk tales. Several tribal communities - like Bawm, Khumi, etc. - live around Boga Lake. Winter is the best season for tourists to visit Boga Lake.

How to Reach Boga Lake Bandarban?

After reaching Bandarban town, hire a local transport four-wheel Jeep called 'Chader Gari' to arrive at Ruma Upazila. From Ruma, you have to make another trip by Chader Gari to reach your destination Boga Lake. If you want to take a bus ride, the fare will cost about 300 BDT per-head.

On the way, you would be required to register some basic information (Name, address, etc.) to the local security authority. Remember that tourists are not allowed to leave Ruma heading towards the Boga Lake after 4 pm.

If you want to leave your footprint on one of the highest peaks of the country, put Tajingdong on your bucket list. Tajingdong Mountain is located at Remakri Pangsha union in Ruma Upazila under Bandarban Hill District. In local tribal dialect "Tajing" means 'Great' and the 'Dong' means 'Hill'. So the whole word stands for "Great hill". Tajingdong is also popular as "Bijoy".

Adventure tourists love to explore Tajingdon during the winter season. This mountain will amaze you with diverse natural beauties, like hide-and-seek of clouds on the hill-top, dense forests, hills and mountains, wildlife, zigzagging paths over the green hill, natural springs, hilly roadside, and the surrounding inhabitants' simple lifestyle, tradition, and culture.

To conquer Tajingdong Peak, arrive at Bandarban first. Then you have to go to Ruma Upazilla, which is about 50 KM from Bandarban town. While planning your itinerary keep in mind that after 4 pm, the tourists are not allowed to leave the Ruma Upazila to visit Tajingdon. You can reach Ruma by local four-wheeler transport (Chader Gari). From Ruma take a bus or Chader Gari to reach Boga Lake. From Boga Lake, you have to start trekking to reach Tajindong.

It is said that Buddhism is the religion of peace. Bandarban is the pious hub of Theravada Buddhism practiced by tribal communities like Marma or Mogh. Here you will find Buddha Dhatu Jadi, the largest Theravada Buddhist Temple of Bangladesh and the second biggest Buddha sculpture in the country. This Buddhist temple is called 'kyang' in the local language. It is also popular as the 'Bandarban Golden Temple' to the tourists.

In the temple area, you would find a small pond on the top of a hill. People adore this place as "The Pond of Angels". Standing in this place, you can enjoy a panoramic view of the surrounding hills and vast natural greenery. Here diverse festivals take place every year.

How to Reach Bandarban Golden Temple?

This holy Theravada Buddhist temple stands at the Pulpara area, which is 4 KM away from Balaghat town. 'Buddha Dhatu Jadi' is 10 kilometer from Bandarban Hill District. You can reach this place from Bandarban town hiring local transport like auto-rickshaw or manual rickshaw. Bandarban Golden Temple is open for tourists from 5 to 7 PM. The entrance fee is only 10 BDT. Before entering the temple precinct you need to remember that here pilgrims follow a strict dress code like 'no shorts and no shoes'.

Do want to enjoy both thrill and life-threatening suspense while bathing in the mighty springs of a wild hilly fountain? If yes, then dare to explore Nafakhum, the most wonderful and equally powerful waterfall in Bandarban.

Nafakhum is also called the Remakri waterfall. Nafakhum falls under the unruly hilly river Sangu at Remakri in Thanchi Upazila of Bandarban Hill District. In this natural waterfall, a heavy flow of water pours down with great power, sound, and volume declaring pride and grandeur. Not to mention, Nafakhum is one of the most voluminous natural cascades in Bangladesh.

The serpentine Sangu River creates a stunning combination with the blue sky and surrounding hills. The breathtaking beauty of the big rocks over Sangu will make your trip unforgettable. This place is popular as 'Boro pathor'.

How to Reach Nafakum Waterfall?

To enjoy the splendor of Nafakum, you have to reach Bandarban Hill district first. Then, you can get on a bus heading for Thanchi Upazila, which is 79 KM away from Bandarban. The journey may take around 4 to 5 hours. You would be required to enter your basic information details at the Remakri Army Camp. At Remakri it is mandatory for the tourists to hire a tour guide selected by the Tour Guide Committee. The tour guide will accompany you throughout your journey. Usually, a tour guide charges 500 to 600 BDT per day.

At this point, you need to hire an engine boat to reach Remakri. For an up and down journey, the boat fare ranges from 4000 to 5000 BDT depending on boat size and capacity. It usually takes about four hours to reach Remakri from Thanchi.

If you want to touch the moving clouds while standing over a hill-top, visit Nilgiri, which is another favorite of tourists in Bandarban. Standing 3500 feet above sea level, Nilgiri is located in Thanchi thana in Bandarban Hill District.

The beauty of Nilgiri varies with the change of seasons. During winter this place becomes foggy. Tourists love to enjoy a campfire in such weather. While in monsoon this place gets nearly covered by the fleeting clouds. Besides these, from Nilgiri, you can enjoy the spectacular view of the sunrise, sunset, sinuous Sangu River, surrounding greenery, etc.

Near the Nilgiri hill, you can visit a traditional village of 'Mro' aborigines. Their simple but colorful lifestyle can make you rediscover the meaning of life from a new perspective.

How to Reach Nilgiri, Thanchi

Nilgiri is located about 46 kilometers away from Bandarban. You can hire a private vehicle from Bandarban Sadar to reach Nilgiri. On the way, you have to register your information (Name, contact details, etc.) to the Army check post. Alternatively, you can ride on a Thunchi-bound bus or local transport to arrive at Nilgiri.

When to Visit Bandarban Tourist Spots?

During the monsoon season, the weather of Bandarban feels warm with good chances for rain. Tourists hardly visit Bandarban in these months. If you are looking for deals and offers at resorts and hotels, take the chance. However, during the rainy season the Hill Tracts region including Bandarban Hill District runs the risk of landslides, which can hinder the local transportation system for days.

Due to the nice weather with very small chances of rainfall, Winter is the best as well as the busiest season for tourism in Bandarban. The charges of hotels and resorts usually increase during this period.

Most creative ways to eat more fruits for the non-fr ...