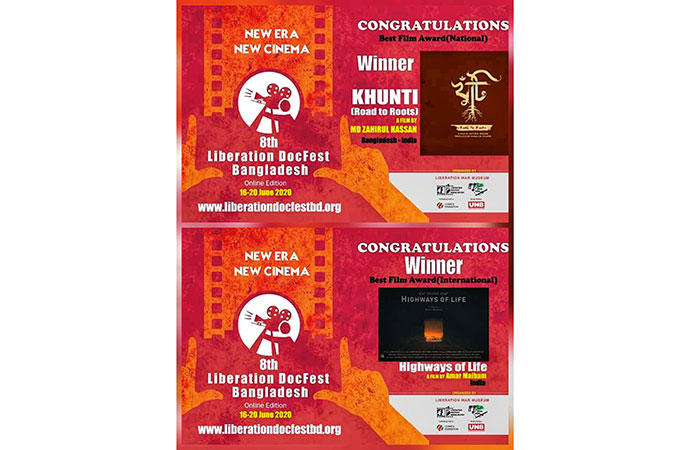 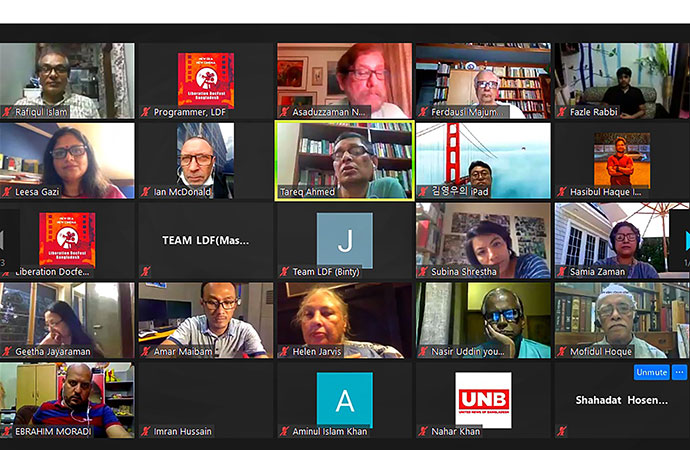 South Asia's first virtual film festival, the "8th Liberation DocFest Bangladesh-2020" concluded on Saturday having drawn a great response from film lovers at home and abroad by providing a breathing space for all amid the coronavirus pandemic.

The five-day-long festival, organised annually by the Liberation War Museum, wrapped up with a concluding and award-giving ceremony via Zoom.

"The 8th Liberation DocFest-2020 has generated a new idea on how to consolidate our strength in this unfortunate time of the ongoing global pandemic. This was a tremendous festival organised by the Liberation War Museum with its main focus on our Father of the Nation, Bangabandhu Sheikh Mujibur Rahman as 'Bangabandhu: the Liberator' and other great leaders - and I believe when the crisis ends in future, we will meet again and celebrate new ideas and films," Noor said commenting on the festival.

Secretary to the Liberation War Affairs Ministry Aminul Islam Khan appreciated the participants and the organizers from home and abroad, saying, "Father of the Nation Bangabandhu Sheikh Mujibur Rahman said "Nothing can stop us from doing good things" - and throughout the festival, this was proven by all the enthusiastic filmmakers-viewers and organizers."

He said it was a pleasure to see a huge number of young and energetic minds take part in this year's DocFest showing great enthusiasm for the history of Bangladesh.

Speakers and organisers expressed their heartiest gratitude to the festival's organizing partner Cosmos Foundation and media partner United News of Bangladesh (UNB) for their support in both the arrangement and operation of this year's festival.

Nahar Khan, Director of UNB and Vice President of Cosmos Group said, "It was truly a wonderful opportunity for UNB and Cosmos Foundation to provide support as the Media and Technology Partner respectively, and work in collaboration with the Liberation War Museum for the first of its kind virtual DocFest in South Asia."

Festival Director Tareq Ahmed said that a total of 1800 films were submitted in the 8th DocFest till late March and 200 were selected from the list till last April. And finally a total of 83 films were screened throughout the five-day festival.

Concluding the ceremony and the 8th edition of the Liberation DocFest-2020, Trustee of Liberation war Museum Mofidul Hoque thanked all participating filmmakers who came with the determination to overcome the challenge of life through bringing hope in the darkness.

"Filmmakers from more than 50 countries joined in this first-ever virtually hosted film festival in South Asia - which is a very significant achievement for us all. In this unprecedented and unthinkable time of the ongoing global pandemic of COVID-19, the festival became an international example that will carry forward the solidarity of the world," he said.

Hoque also mentioned that the festival was part of the birth centenary celebrations of Father of the Nation Bangabandhu Sheikh Mujibur Rahman and next year it will be celebrating the 50 years anniversary of Bangladesh's Independence.

Noted Bangladeshi filmmaker Aka Reza Galib, Jury Member of the National Competition announced 'Khunti (Road to Roots)', a Bangladesh/India joint collaboration as the winner in the 'National Competition' category. The director of the film, Md Zahirul Hassan, will receive Tk One Lakh, a crest and a certificate.

1.
No room for complacency
2.
Coping with the Coronavirus: The impact of a scourge across the spectrum
3.
The threat is real
4.
COVID-19 unites Saarc leaders through virtual world