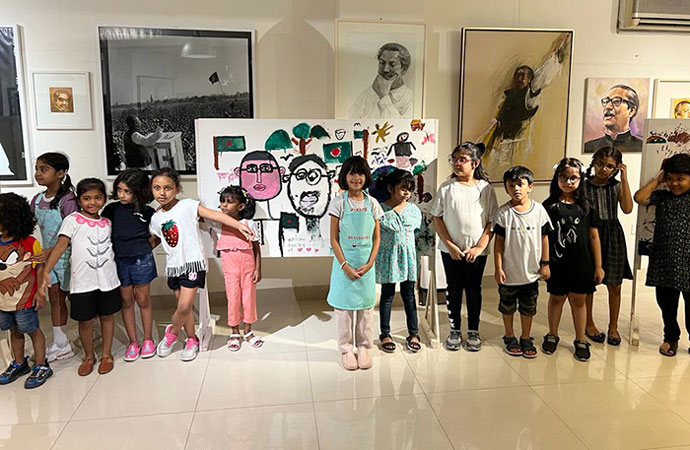 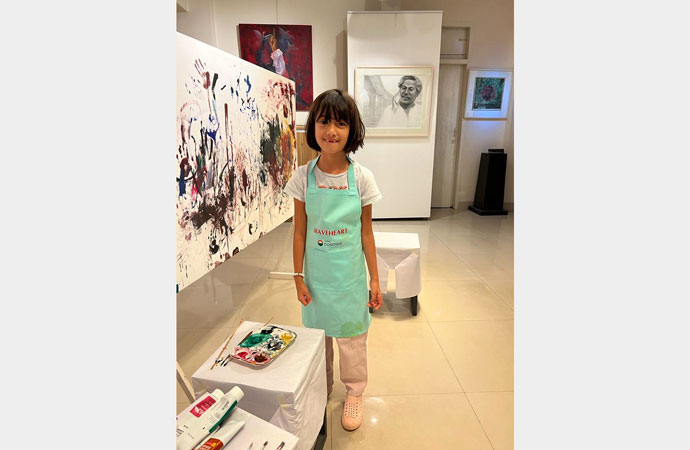 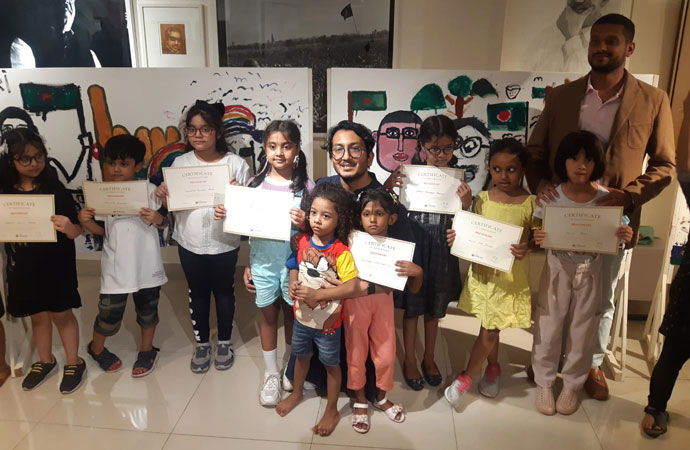 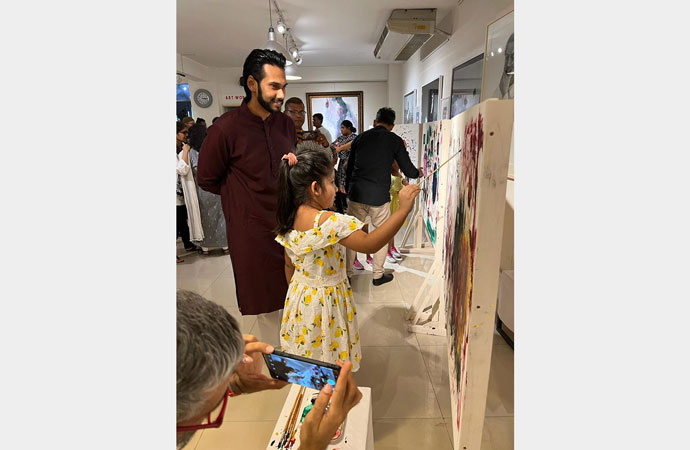 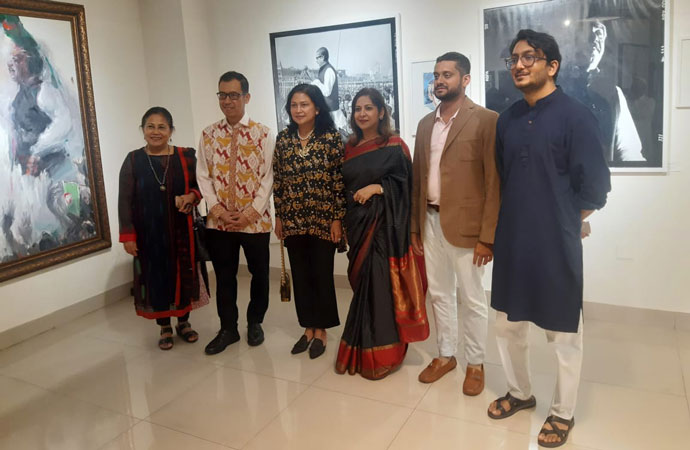 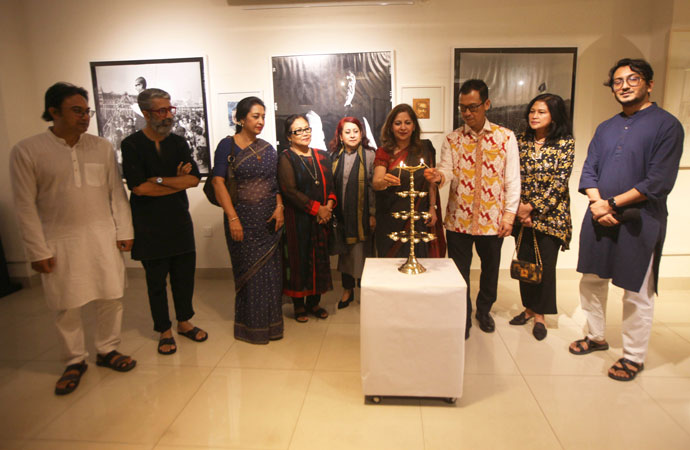 Since the Father of the Nation Bangabandhu Sheikh Mujibur Rahman and nearly all of his family members were brutally assassinated on August 15, 1975, the eighth month of the Gregorian calendar has always held special significance for Bangladeshis as one for mourning and reflection.

A thoroughbread politician who led a life of constant struggle and sacrifice for a cause, Bangabandhu's place in history was assured when he led the people of what was once East Pakistan to freedom in 1971, establishing the newly-independent state of Bangladesh.

Bangabandhu's tireless contributions to improving the lot of his people, today's Bangladeshis, mark him out as one of the 20th century's tallest leaders. A natural born leader of men, he was also a man of culture - and he proved that from time to time, by always supporting and patronising Bangladeshi arts and culture, as well as the artists.

Echoing this motto, Gallery Cosmos has been organising its highly acclaimed tribute events observing the National Mourning Day in August since 2015 - and continuing the journey, this year Gallery Cosmos is hosting an exclusive group-art, photography and installation exhibition titled 'BRAVEHEART' from 12 to 31st August at Cosmos Centre in the capital.

Mofidul Hoque, a founding Trustee of the Liberation War Museum Bangladesh, virtually inaugurated the exhibition on Friday as the chief guest, while eminent artist and freedom fighter Biren Shome, renowned sculptor Bhaskar Rasha and Heru Hartanto Subolo, ambassador of the Republic of Indonesia, joined the inauguration ceremony as the special guests. Supported by the Cosmos Foundation, the exhibition's inauguration ceremony was also joined by Tehmina Enayet, Director of Gallery Cosmos and Masud Jamil Khan, Deputy Managing Director of Cosmos Group.

"August is the mourning month for our nation, as we observe the National Mourning Day this month. However, this is the month that motivates us at the same time, to be unified as a nation - which Bangabandhu taught us throughout his eventful life. His ideology behind building a secular, democratic nation for all was truly empowering, which led us to remember his sacrifice with the utmost respect - and Gallery Cosmos has been remembering Bangabandhu with this great cultural initiative titled BRAVEHEART since 2015. Artworks from diversified mediums including artworks, sculpture installations and photographs have reflected befitting tributes towards Bangabandhu by the participating artists, and I wholeheartedly wish all the success to this exhibition," Mofidul Haque said in a video message while inaugurating the exhibition.

Apart from the Bangabandhu family, a true hero also sacrificed his life on that day as the only one who acted on their leader's call to try and save him. The only one, who despite impossible odds, answered the call of duty. The one man whose story, on a day for jackals, offers the nation some redemption. He is of course none other than Shaheed Brigadier General (posthumous) Jamil Uddin Ahmad, 'Bir Uttam', or as he is immortalised in the hearts and minds of Bangladeshis, Colonel Jamil.

Reminiscing those brutal periods from her memory lane, Colonel Jamil's elder daughter and Gallery Cosmos Director Tehmina Enayet said, "In the dawn of 15 August 1975, Bangabandhu called our father and informed him that he and his family members had been attacked. He asked him to come and save him straight away. Our father responded quickly and before he got into the car, our mother, Anjuman Ara Jamil, asked him one last time - "Do you really have to go?" He went because Bangabandhu and his family were in danger. I never really imagined that it would be the last time I would see him - however, we do not have any regret because he dedicated his life during his valiant effort to save our Father of the Nation and his family.``

"During that tragic night, the assassinators did not show mercy to anyone, not even Bangabandhu's youngest child Sheikh Russel. Through this commemorative exhibition, we are not only mourning our Father of the Nation and his family but also honouring them with the utmost respect which they deserve," Tehmina Enayet said at the event.

Tehmina Enayet thanked UNB and Dhaka Courier for being the knowledge partner of this exhibition.

Masud Jamil Khan, Deputy Managing Director of Cosmos Group said, "There are two significant years in our history - one is the 1971 Liberation War through which we earned our independence; the other one is the 1975 - as we lost our great Father of the Nation Bangabandhu Sheikh Mujibur Rahman and his family on 15th August of that year. This date is important for my family as well, as my valiant grandparent Brigadier General (posthumous) Jamil Uddin Ahmad 'Bir Uttam' also sacrificed his life on this day, as the only one who went there to save Bangabandhu. We must remember these two days behind our independence. Bangladesh is progressing day by day according to the dream envisioned by Bangabandhu, his daughter and our Prime Minister Sheikh Hasina is successfully leading the nation and I witness this myself as a businessman. This event is a very important initiative for us, and I wholeheartedly thank Gallery Cosmos for successfully organising this event."

The gallery's chairman, Enayetullah Khan, sent a message from abroad saying: "We have never seen another leader in the mould of Bangabandhu, which is why even today, 47 years after his passing, I still regard him as my leader for life."

Turning to Brigadier General (posthumous) Jamil, Khan said his example stands as a unique act of courage and heroism, on a day that was otherwise for cowards. "It's important that we as a nation never forget the events of August 15th, 1975, and both me and my entire family feel that art has just as important a role to play in preserving the truth as history, literature or any other discipline. So I'd like to thank you all for attending the inauguration of this important exhibition, that is meant to play a part in that."

Eminent artist and freedom fighter Biren Shome said, "When I first got admitted to Charukala (now the Faculty of Fine Art), Dhaka University in 1964, I saw how Bangabandhu fought to establish the rights of Bangladesh and its people. Cultural activists have always been an integral part of the political movements during that period, under the great leadership of Bangabandhu. Today's 'Sonar Bangla' was envisioned by him, and he is the man who gave us a sovereign flag. Through this tribute exhibition, I believe the respect that our great Father of the Nation deserves, is being accurately conveyed."

Legendary cartoonist, painter and art maestro Rafiqun Nabi expressed his opinion on the initiative through another video message, where the eminent artist stated: "Gallery Cosmos always organises exclusive exhibitions in August every year, marking the National Mourning Day. Back in 1975 when Bangabandhu and his family were assassinated, that was a heinous attack on our nationality and our newly-liberated country. This exhibition is a befitting tribute to our beloved Bangabandhu, and Gallery Cosmos deserves appreciation to remember him every year with this special exhibition and its other artistic initiatives."

Indonesian ambassador in Bangladesh Heru Hartanto Subolo joined the exhibition's opening ceremony alongside his wife, and lauded this artistic initiative of Gallery Cosmos for showcasing tribute to Bangabandhu. "Bangladesh and Indonesia are celebrating over 50 years of diplomatic relationship, and the two countries also share many cultural similarities. We are amazed to see how the Gallery Cosmos is paying tribute to the founder of Bangladesh, the great leader Bangabandhu Sheikh Mujibur Rahman through these versatile mediums of artworks."

Prior to the formal inauguration of this exclusive exhibition, the day began with a unique art camp. A vibrant team of 12 child artists and future master painters participated in the group art camp at the exhibition venue and showcased their heartfelt tribute to the Father of the Nation through their flamboyant brushstrokes on the canvases.

"The beauty of this special event and particularly this art camp is that these kids are becoming a part of our history. They are learning about Bangabandhu through this event, and his heroic journey should be learned through this kind of interactive event that our kids can enjoy. I was born years after our glorious Liberation War and his tragic assassination, but history was transcended among us through our own arts and culture. Not only as a participating artist in the exhibition but also as a father, I wholeheartedly appreciate this wonderful venture of Gallery Cosmos," artist and art maestro Bishwajit Goswami shared his opinion with UNB about the exhibition and the art camp for children.

Visitors can explore the exhibition at the Cosmos Centre, Malibagh in the capital till August 31.

Fuel prices: The only way is up

By chance, AP reporter on scene to witness Rushdie a ...