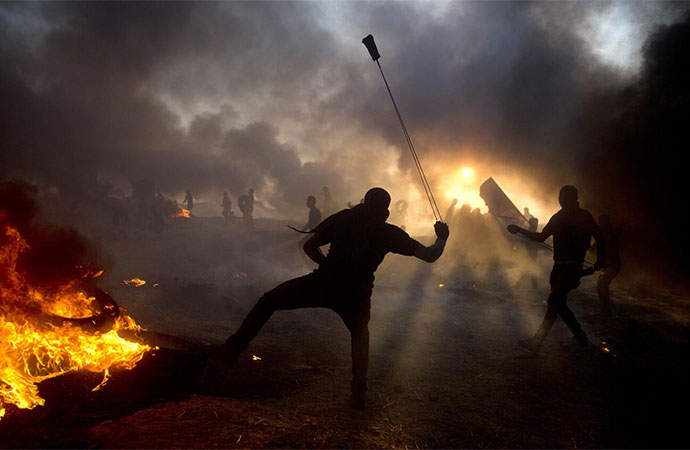 Israel's failure to investigate shootings that killed more than 200 Palestinians and wounded thousands at protests along the Gaza frontier in recent years, has strengthened the case for the International Criminal Court to intervene, according to a report released this week by the Israeli rights group B'Tselem and the Gaza-based Palestinian Center for Human Rights. The Israeli military rejected the findings, saying the "mass riots" organised by Gaza's militant Hamas rulers were aimed at providing cover for cross-border attacks.

Beginning in March 2018, every week for around 18 months, thousands of Palestinians gathered at different points along the frontier, burning tires, hurling stones and firebombs, and trying to breach the security fence. Israeli snipers fired live ammunition, rubber-coated bullets and tear gas from the other side, killing at least 215 Palestinians, most of them unarmed, including 47 people under the age of 18 and two women. Out of 143 cases transferred to military prosecutors, just one led to an indictment.

After a monthslong hiatus, Iran returned to negotiations in Vienna this week aimed at reviving its cratered nuclear deal with world powers. But Western negotiators appeared wary of Tehran's true intentions, as it has continued its march towards obtaining enriched uranium, in underground nuclear facilities such as Fordow. The International Atomic Energy Agency reported that Iran began feeding a cascade of 166 advanced IR-6 centrifuges with uranium there. The agency said Iran plans to enrich uranium there up to 20% purity - a short, technical step from weapons-grade levels of 90%.

Iran has acknowledged the higher enrichment there with advanced centrifuges also barred by the 2015 accord. It may be another hard-line negotiation tactic like the others embraced by the diplomatic team under new President Ebrahim Raisi. American negotiators remain outside of the room where the talks are going on, due to Donald Trump unilaterally withdrawing from the deal in 2018, sparking years of wider tensions in the Mideast that continue today.

The Biden administration struck an agreement with Mexico to reinstate a Trump-era border policy that forces asylum-seekers to wait in Mexico for hearings in U.S. immigration court. Revival of the "Remain in Mexico" policy comes under a court order even as the administration manoeuvres to end it in a way that survives legal scrutiny. President Joe Biden scrapped the policy, but a lawsuit by Texas and Missouri has forced him to put it back into effect.

About 70,000 asylum-seekers have been subject to the policy, which President Donald Trump introduced in January 2019 and which Biden suspended on his first day in office. Illegal border crossings fell sharply after Mexico, facing Trump's threat of higher tariffs, acquiesced in 2019 to the policy's rapid expansion. Asylum-seekers were victims of major violence while waiting in Mexico and faced a slew of legal obstacles, such as access to attorneys and case information.

The Women's Tennis Association (WTA) announced the suspension of all tournaments in China, including Hong Kong, amid concerns about the safety of the Chinese tennis star Peng Shuai, following weeks of a high-profile row with Beijing over the player's wellbeing. The move was welcomed by world tennis figures who have been campaigning for Peng's safety, and marked a paradigm shift in how sports associations have dealt with China's growing influence in world affairs. The WTA also found support on Chinese social media.

Early in November, Peng, 35, used a post on Chinese social media website Weibo to accuse 75-year-old Zhang Gaoli, an ex-vice premier and member of the CPC's Politburo from 2013-18, of having coerced her into sex three years ago. Her lengthy post was quickly deleted by the censors, and Peng disappeared from public for more than two weeks before resurfacing in what looked like a series of carefully stage-managed appearances, even as the WTA and colleagues said they were unable to reach her.

Women have always been at the forefront of Sudanese ...